On paper, we are the best team in the League. We are deep and athletic. All we have to do is play to our abilities.

Obviously the Pistons are not the best team today. The Pistons have only won 22 games this season (with 39 losses). And it seems unlikely that the team that went to the Eastern Conference Finals each season from 2003 to 2008 will even make the playoffs in 2011.

Who is to blame for this decline? It seems clear the Pistons have blamed John Kuester, the team's head coach. It has been reported that in early January...

As stunned coaches and teammates watched, (Rip) Hamilton bellowed at Kuester that he had been a failure in his two seasons in Detroit, blown the opportunity the franchise afforded him and was nothing more than a career assistant coach, sources said.

And this past week several Pistons failed to show up for practice. Additionally, players were seen laughing on the bench as their head coach was ejected during a loss against Philadelphia.

Clearly Rip Hamilton, as well as several of Hamilton's teammates, blame Kuester for the team's problems. But there appears to be another reason why Stuckey's vision of this team has been dashed.

Let's consider player performance. The box score statistics tracked by the NBA can be utilized to measure a player's Wins Produced (a measure explained in Stumbling on Wins and HERE). And when we look at the Pistons in 2010-11, here is what we see: 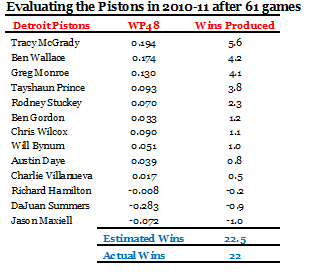 Once again, the Pistons have won 22 games this year. And the player's Wins Produced is consistent with this outcome. In looking at these numbers it is important to remember that an average NBA player will post a WP48 [Wins Produced per 48 minutes] of 0.100. Right now, the Pistons only have three above average players: Tracy McGrady, Ben Wallace and Greg Monroe. These three players are costing the Pistons about $6 million. The remainder of the roster -- which costs nearly $60 million -- doesn't have any above average players.

Of course, maybe the poor performance of these players is because Kuester is such a bad coach. To address this issue, let's consider what we should have expected the Pistons players to produce given their per-minute performance in 2009-10. The following table reports this analysis. 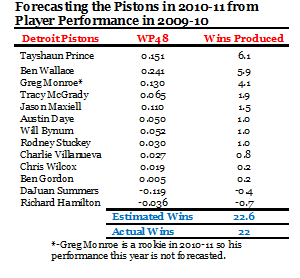 Once again, an average player posts a WP48 of 0.100. And last year, Tayshaun Prince, Jason Maxiell and Ben Wallace were above average. Every other veteran, though, was below average. And with the exception of McGrady, all of these veterans are below average this year. Overall, given last year's performance, we would expect the Pistons to have won about 22 or 23 games this year. In other words -- despite the argument offered by Stuckey before the season started -- we should have expected the Pistons to be a lottery team this year.

So can we blame the coach? Well, Kuester was the coach last year. And many of these players were with Kuester in 2009-10. Maybe Kuester started holding these players back last season. To address this issue, let's look at the Pistons one more time. This time we will consider each player's per-minute performance in the year before they had Kuester as a head coach. 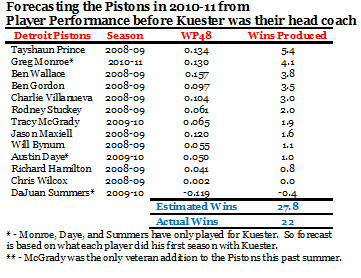 This "improvement" can be linked to three players: Jason Maxiell, Ben Gordon and Charlie Villanueva. Each of these players was quite close to average in 2008-09. And Maxiell essentially maintained his production in 2009-10 (so we probably can't blame the coach for his decline in 2010-11). Gordon and Villanueva, though, have declined somewhat since joining the Pistons.

We should note, though, that the declines have been modest. And 2008-09 was actually the best per-minute performance offered by both Gordon and Villanueva in their careers. This is not unusual. Each player was in their mid-20s in 2009 and this is where basketball players tend to peak. And for both players, the peak performance was close to average. Although each player was only about average in 2008-09, Joe Dumars -- the general manager of the Pistons -- gave Gordon and Villanueva $95.7 million during the summer of 2009.

Clearly these contracts have not worked out. But given the past performance of each player, one should not have expected a different outcome. Gordon and Villanueva are simply not "good" players. Dumars, though, paid each as if they were.

The problems with Gordon and Villanueva capture the essential problem in Detroit. The players Dumars has selected are simply not that productive. This was clear before the 2009-10 season began, a season that ended with the Pistons winning only 27 games. Last summer -- after seeing his team in the draft lottery -- Dumars only added Greg Monroe and Tracy McGrady. Such modest changes were not enough to transform a lottery team into a playoff contender. And so we should not be surprised to see the Pistons are once again out of contention.

But clearly the players on the Pistons are surprised. And clearly these players are blaming their coach. Coaches in the NBA, though, don't often change the productivity of their players. The season-to-season correlation in per-minute production for players is 0.85 (that means players in the NBA are very consistent across time). In a study of 62 NBA coaches, Mike Leeds, Eva Marikova Leeds, Mike Mondello and I only found 14 coaches who had a statistically significant impact on player performance (after controlling for such factors as age, productivity of teammates, etc...). The list of coaches who did not appear to alter the performance of their players included Pat Riley, Chuck Daly, K.C. Jones, Lenny Wilkens, and Jerry Sloan. In other words, Kuester's apparent failure puts him in pretty good company.

Although the Pistons may want to blame their coach, it simply was not realistic to expect Kuester to transform this roster into a contender. Given the past performance of these players, we should have expected the Pistons to miss the playoffs in 2010-11. These players, though, appear to have a different estimation of their actual abilities. And all the losing in Detroit isn't changing their minds.

The disconnect between the players' estimation of their abilities and the actual state of these abilities appears to be the primary source of these player's misbehavior. These players think they are good. But the team keeps losing. Rather than blame themselves, though, they have lashed out at Kuester.

It is tempting to solve this problem by firing Kuester (although Dumars says this is not happening any time soon). Changing coaches, though, will not change outcomes in Detroit. The Pistons simply need to find players who not only think they are productive, but are actually capable of producing wins in large quantities. Until that happens, expect to see more unhappiness -- and perhaps more misbehavior -- in Detroit.