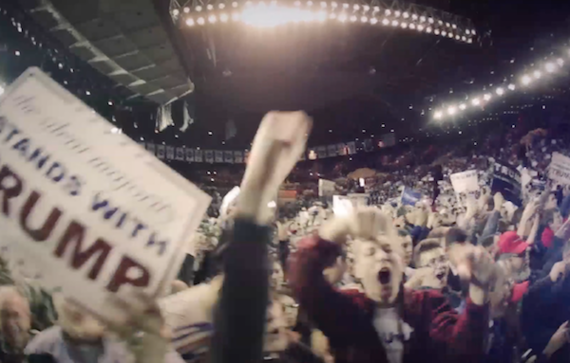 Raise your hand if you believe the following: 1. Facts matter in politics. 2. A good argument should sway your opinion. 3. Elections should be about issues. I'll assume your hand went up. That means congratulations are in order. You have earned an A in civics. Now that we have that out of the way, we should talk about the real world.

Let's focus on facts. For either we respect facts or we don't and if we don't neither of the other two points are worth debating. Which brings me to Donald Trump. He lies flagrantly and promiscuously. He seems to lie so often and so egregiously one wonders if he himself any longer realizes when he's lying. But the interesting question at the moment is not why Trump lies as why his followers don't seem to care when he does. What's that all about?

The temptation is to think there's something wrong with those Trump voters. For they aren't reacting the way we think they should be, making them seem even more cartoonish than they already appear. They're not just susceptible to xenophobia, misogyny, racism and the other pariah appeals Trump's making; they're also dangerously impervious to plain reason. In many ways this seems like the biggest threat of all. If you can't reason with people, politics doesn't work.

But since when have voters ever worried much about facts?

Daniel Patrick Moynihan famously said that we are entitled to our own opinions but not our own facts. But facts are often held to be less precious than we think they are. Two examples drawn from Democratic Party presidents (I want to be fair and not just pick on Republicans) are illustrative.

Let's start with a Democratic Party icon: Jack Kennedy. On the campaign trail in 1960 Kennedy said it was a fact that the Russians had more nuclear missiles than the United States. He was wrong. Okay, so he made a mistake. But he continued to insist that there was a missile gap to the Soviet's advantage even after he was briefed by General Earl Wheeler that there wasn't.

After the election his secretary of defense, Robert McNamara, told the press on background that a study had found there was no missile gap, leading to blaring headlines the next morning. JFK's reaction? He ordered his press secretary, Pierre Salinger, to tell the media that there had been no study and that there was a gap. The truth was that JFK himself didn't take his own rhetoric about the missile gap seriously. At cabinet meetings he cracked on numerous occasions, "Who ever believed in the missile gap" anyway?

Then there's JFK's successor, Lyndon Johnson. During the election of 1964 Johnson told the American people that the North Vietnamese were guilty of making repeated unprovoked attacks on our naval vessels in the Tonkin Gulf. This claim was wrong on two counts. One, the "attack" LBJ drew attention to probably didn't happen as he himself privately acknowledged. "Hell, those dumb stupid sailors were just shooting at flying fish," he confided to an aide. Two, America was no innocent by-stander. For months we'd been engaged in a quasi-war with North Vietnam where we were the aggressors.

LBJ's lies eventually caught up with him, earning him a well-deserved reputation as a prevaricating politician who could lie even about a matter as serious as war. He told Americans we were winning in Vietnam when actually we were losing, leading to the much lamented credibility gap with which his administration has forever since been associated.

But it wasn't until thousands of soldiers began coming home in body bags that Americans began to care much about LBJ's modest appreciation of the truth. And JFK's lie about the missile gap never caused the American public to reassess his character though he had built his foreign policy critique of the Eisenhower administration on the claim. To this day few remember that Kennedy lied brazenly about our nuclear capacity even though the truth had been splashed on the front page of America's great newspapers. The public preferred to believe the hokum Pierre Salinger peddled at Kennedy's behest. Not until Kennedy was implicated in numerous sex scandals did Americans finally concede that Kennedy wasn't the man they had thought he was.

The history books are full of nuggets like these. Politicians lie. In our cynical moments we admit that, but still we can't seem to acknowledge the implication. I'll spell it out. They lie because the voters often don't care about the truth. Our fixation with the truth and facts and all that is a bit of a sham. It's not just the pols who lie. So do the voters. We lie about our unwillingness to put up with lies.

It's not that we're congenital prevaricators. The answer is more complicated. Our brains are partisan. While we are quick to seize on the misstatements of other candidates, we give them a pass when it's our own. When the social scientist Drew Westen put voters in an MRI machine he discovered that their brains quickly shut off the flow of information contrary to their beliefs about their favorite candidates. The neurons actively involved in the transmission of this information literally went inactive.

Donald Trump's voters have been ridiculed for their willingness to overlook his inconsistencies and lies, but this is what all voters do once they've become committed to a particular candidate. Cognitive dissonance theory explains why. Once we have made up our mind about something contrary information disturbs our feeling of well-being and we do whatever we can to ignore it or explain it away.

From the looks of the faces of the journalists quizzing the candidates at the presidential debates the candidates' indifference to the truth is shocking. But neither history nor the findings of social science justify this naive faith in the truth.

Human beings do indeed care for the truth and we come equipped with cheater detection software to help us detect lies. It's that software that helps us detect nervousness in a deceiver. Without trying and often without conscious awareness we pick up on subtle clues: a higher voice pitch, twitching hands, or even a fake smile.

So why doesn't that wonderful human technology help save us from lying politicians? The reason is disturbingly straightforward. It doesn't work if the person speaking believes their own lies. In those situations no flare goes up in our brain warning us to be on alert.

Mitt Romney has beseeched Trump voters not to be suckers. But as long as Trump continues to give the impression that he's being sincere his voters won't have cause to think he's misleading them if they judge him strictly on the basis of his debate performances, which many thus far have been doing.

Here's the good news: We aren't sitting ducks. When a politician lies repeatedly and egregiously they eventually get a reputation for lying (as LBJ did). Once this happens people begin to reshape their perceptions. But this process often takes a long time. Richard Nixon succeeded in fooling millions that he was innocent of charges related to Watergate for eleven months after the break-in. Only then, after the resignation of his two top aides, Bob Haldeman and John Ehrlichman, did his support finally dip below 50 percent. When the allegation first surfaced about Bill Clinton's affair with Monica Lewinsky millions refused to believe it until prosecutors revealed they possessed her infamous blue dress with a semen stain, which prompted Clinton to (sort of) admit the truth.

Donald Trump is responsible for dragging this campaign down to the level of the gutter. And he has told more lies than any other leading political figure probably ever has. But he's not the first politician to lie egregiously. He's building on an all-too well-established tradition. So are his voters in declining to acknowledge his lies.