Both former Secretary of Defense William Perry and former National Security Adviser Zbigniew Brzezinski have spoken about middle of the night phone calls they received in response to purported incoming nuclear strikes. Though the alerts were quickly determined to be false alarms, what if they had happened during a time of crisis, like the Cuban Missile Crisis or Russia's invasion of Crimea? What if the President was forced to make a decision before the full situation could be assessed? 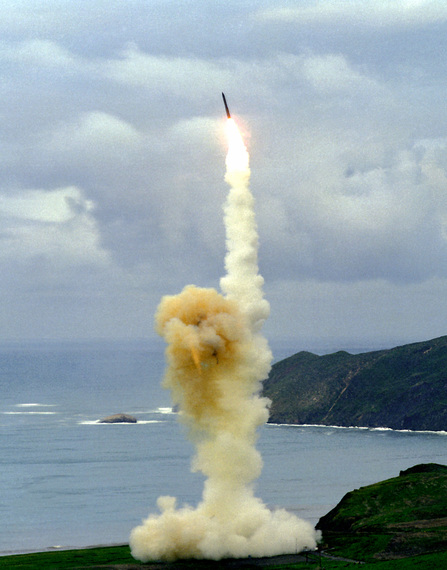 Imagine having minutes - perhaps as few as six by the time the issue is brought to the President's attention - to determine the fate of every living person on the planet. Military infrastructure is reporting that intercontinental ballistic missiles with trajectories directed at the United States have been launched. A nuclear strike seems imminent. Your advisers recommend a full-scale retaliatory attack immediately - before you are hit. What do you do? Give the go-ahead order even though it could be a false alarm? You know false alarms have happened before, but the clock is ticking. The world hangs in the balance and it is your move.

This may sound like a philosophical thought experiment, but under current policy, this scenario could happen to the President of the United States at any moment. In fact, there are approximately 450 silo-based nuclear weapons in North Dakota, Montana, Wyoming, Nebraska, and Colorado that remain on high-alert status, a Cold-War relic that allows the President to fire nuclear weapons, each at least 20 times more powerful than Hiroshima, within minutes of a warning. Because the existing system mandates that these weapons are "launched-on-warning," the military chain of command has less than 30 minutes to assess a nuclear threat, brief the president for a decision, and if the order is given, launch the weapons in response to a pending nuclear attack.

With a recorded history of false alarms and other mishaps, keeping our nuclear missiles on high-alert only serves to increase the risk of nuclear accident, miscalculation, or exchange. Removing this "launch-on-warning" status would remove one of the most dangerous remnants of a Cold War nuclear posture - without harming our deterrent whatsoever.

Our formidable nuclear deterrent is comprised of three separate legs, together known as the "nuclear triad." We have nuclear missiles beneath the ground in silos and onboard submarines roaming undetected beneath the oceans. We also maintain air-launched cruise missiles, and nuclear gravity bombs that can be delivered via stealthy aircraft.

Proponents of "launch-on-warning" proffer old shop-worn arguments based on far-fetched scenarios. They argue that on-alert land-based missiles are necessary because, without them, there would be fewer targets for a nuclear-capable opponent. Therefore, they posit, a reduced number of targets might tempt a nuclear power in a crisis to surprise attack our bombers and non-deployed submarines, betting that whatever command authority remains in the U.S. would not retaliate with the remaining weapons, particularly nuclear-tipped ballistic missiles on deployed submarines (whose whereabouts would be unknown to any adversary).

Such a specious assertion remains as implausible today as it was during the Cold War. It is a certainty that any adversary that attacked the United States would face devastating retaliation, both with nuclear weapons and our superior conventional forces, therefore deterring an attack in the first place. Even if siloed ICBMs were eliminated, the United States would retain a formidable deterrent with bombers and submarines containing many hundreds of strategic weapons capable of destroying any adversary.

Ending a "launch-on-warning" policy, even if ICBMs were not eliminated, or were only partially eliminated, would add stability and set the appropriate example for the rest of the world at a time when we should be leading the way on a path toward more nuclear safety and eventual elimination.

Additionally, with a nuclear overhaul and maintenance plan set to cost $1 trillion over 30 years, the U.S. should not simply overhaul every existing nuclear missile and warhead already in place. Instead, it should be strategic in refurbishing only those components absolutely necessary for a safe and effective deterrent. Otherwise, such an expensive plan will come at the expense of our conventional forces (which remain the bulwark of our security) and our nation's economic viability (which the Joint Chiefs of Staff acknowledge is essential to our national security).

As Professor Dan Wirls (a Council for a Livable World Board Member) notes, the U.S. is heading down an immensely expensive and dangerous path of nuclear excess, mostly just because. Because nuclear policy is on autopilot. Because it has had a nuclear triad for more than half a century. Because all the forces with a material interest in its perpetuation are paying attention. Because nearly everyone else is not.

Without "launch-on-warning," and even without the ICBM leg of the triad, future presidents could be fully confident, with the world's most potent and secure submarine and bomber fleets, that no adversary would contemplate nuclear brinksmanship.

Given the particularly impoverished debates about national security during the presidential campaign, this kind of proposal is essential for the American public to consider, and it has been endorsed by, among others, former Secretary of Defense William Perry.

The next president and Congress must take nuclear policy off autopilot before the current path becomes irreversible.

John F. Tierney is a former nine-term Congressman and current Executive Director of the Council for a Livable World and The Center for Arms Control and Non-Proliferation