My novels have been born in various ways, sometimes with the idea of a character, or through a scene, or from an overhead or imagined scrap of dialogue.

But my 25th book Assault With a Deadly Lie came to me four years ago when I started reading stories about little towns like Neenah, Wisconsin. It's home to only 25,000 people and in the past seven years has had only two murders, but today it's the proud owner of a thirty-ton armored combat vehicle which can protect anyone inside against mines. 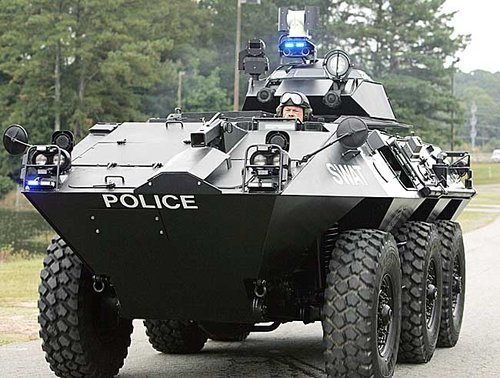 Landmines have never been a problem in Neenah or anywhere else in the United States. This is not Afghanistan or Iraq. But that's besides the point. The Pentagon has been like Santa Claus for police departments across the country, showering them with armored vehicles, aircraft, machine guns, grenade launchers and more -- as if war were about to break out at any minute.

What's the difference now between police officers and soldiers when they're almost armed the same way and trained the same way ? As the New York Times reported recently, "Recruiting videos feature clips of officers storming into homes with smoke grenades and firing automatic weapons. In Springdale, Ark., a police recruiting video is dominated by SWAT clips, including officers throwing a flash grenade and creeping through a field in camouflage."

If you argue that our police have to be safe at all costs, it's hard to disagree. But groups on the left and the right side of the political spectrum both believe that the militarization of American police forces has gone way too far. When the ACLU and the Heritage Foundation speak with one voice, you know we're facing a major crisis.

That militarization is one of the main subjects of my new book. It's the first novel I felt urged to write because of current events that seemed to be spiraling dangerously out of control. I started it before the events in Ferguson opened a national conversation about the possibility that we might soon be living in a police state. I'm glad to add my voice to that debate and I hope we can reverse the path we're on.

Lev Raphael's 25th book, Assault With a Deadly Lie, is a novel of suspense set in a fictional Midwestern college town. You can check out his other books at Amazon.