It's not unusual -- though frankly still bizarre -- to see live and personified chickens in fast food commercials that encourage their own processing and consumption (Saturday Night Live illustrated that bizarreness well in a 1993 parody).

But even more disturbing are recent ads that celebrate specific and unquestionably cruel chicken-raising practices. Clear cases of abject animal suffering are being played for laughs, but you can bet real chickens don't think it's funny. And nor should we.

Take the latest Carl's Jr./Hardee's spot "Large Breasts" for their Big Chicken Fillet Sandwich. In it, chickens walk around with their breast areas blurred, as an announcer explains: "The FCC prohibits showing large breasts on television... unless of course it's in a sandwich. Introducing the biggest, tastiest chicken breasts in fast food."

But the alarming truth about "big chicken breasts," as we explain in our "The Truth About Chicken" campaign and recent report, should inspire repulsion, not rejoicing.

These days, chickens intended for consumption are strategically bred to maximize the amount of breast meat, even at great -- sometimes fatal -- cost to their welfare. Thanks to a horrific combination of selective breeding and rearing practices, most of today's chickens are growing at a rate three times faster than they were 60 years ago. The clean, healthy, chickens you see in that commercial bear very little resemblance to actual broiler chickens ultimately winding up on your tray or in your bag. 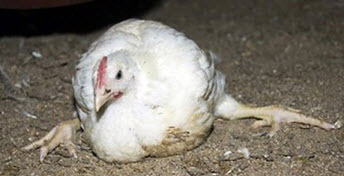 This rapid and unnatural growth rate strains their hearts, lungs and bones. Unable to support their massive bodies, many have trouble standing, and spend much of their lives lying in their own waste with open sores and wounds.

In some cases, the birds' breasts grow to such extreme sizes that they can suffer from conditions like "green muscle disease," in which parts of the breast muscle dies and rots from lack of circulation, even while the chicken continues to live. As our campaign explains, there are better, more humane ways to raise chickens.

Another perplexing new parody comes from Burger King: "Subservient Chicken." In it, a formerly popular chicken -- actually, an actor in a chicken suit -- faces hard times, ultimately finding itself in a satirical cockfight.

The satire isn't designed to enlighten audiences about animal fighting; it's designed to sell more chicken sandwiches. In May, while the ad was portraying cockfighting as a light, comical occurrence, we were in Virginia, assisting authorities in raiding a major cockfighting ring involving over 500 birds. Just last February, we assisted with the sheltering of as many as 4,000 roosters and hens associated with cockfighting in the largest cockfighting case in New York State history.

Cockfighting is crueler than you might think. Injuries include punctured lungs, broken bones and pierced eyes. Gaffs -- long, dagger-like attachments -- are attached to the birds to make them more deadly, and steroids or other drugs are often administered to make the birds more aggressive.

At the triumphant end of the Subservient Chicken commercial, our resurrected hero, now named "Chicken Big King," finds himself not only back in the spotlight, but "back with Burger King's new sandwich, aptly named Chicken Big King."

So Chicken Big King is back... and wants people to eat him for lunch. Still bizarre.

A civilized society -- whether its members eat chicken or not -- shouldn't tolerate animal abuse anywhere, for any reason. Selling more sandwiches is no justification for minimizing or lampooning abject suffering, even if the effect is inadvertent, or exists because not enough people are aware these funny fictions are actually real-life cruelties.

Fast food gives people the opportunity to buy cheap chicken. As you watch these commercials, I only ask that you consider the price chickens are paying as well.