An unprecedented cyclone ripped up the Arabian Sea on November 1, making landfall in the Republic of Yemen. The storm made international news. However, a far more dangerous and deadly storm -- a war -- has engulfed this country of 25 million for the past eight months, with limited media coverage. How many Americans are aware of the scope of the humanitarian disaster in Yemen, and our direct role in supporting it?

The history of this conflict is emblematic of others in the Arab world. The background: a close US ally, Saudi Arabia, supports - to the tune of billions of dollars - a strict and violent version of the Sunni branch of Islam (Wahhabism).

"Saudi Arabia's export of Wahhabi puritanical Islam has been one of the worst things to happen to Muslim and Arab pluralism," according to New York Times columnist Thomas Friedman. Moderate Muslims have been largely unable to resist this trend. Bader Al-Din Al-Houthi, a Zaydi religious leader in Yemen who objected to spreading Wahhabism in Sa'da, the heartland of Shia Zaydi Islam, was assassinated in 2004.

This led to a series of wars between the Houthis and the Yemeni government, along with its Saudi backers. In 2014, Houthi forces took control of the capital and forced out its president.

In March 2015, after several rounds of peace negotiations, the UN envoy to Yemen announced that the Yemeni factions were on the verge of a power sharing deal. Ignoring that announcement, Saudi Arabia and a "coalition force" of ten Arab nations, backed by the US and the UK, launched an all-out air campaign against Yemen. The aim of the effort was ostensibly to return President Hadi to power and rid Yemen of the Houthis, regarded by the Saudis as a proxy for their regional rival, Iran.

This past May, the entire province of Sa'da, a Houthi stronghold of about 900,000 people, was declared a military target, in clear violation of international law. The population was given 24 hours to leave, an impossibility given the difficult roads and little available fuel. When the bombing started, no target was spared: clinics and hospitals, schools, and a 1000-year-old mosque. The bombardment disrupted or destroyed nearly every aspect of Yemeni lives: markets, roads and bridges, electricity and water stations, food storage areas, and gas stations. Priceless cultural treasures were lost: a museum with over 12,500 artifacts, many over 3000 years old, was completely destroyed. The old city of Sana'a, a UNESCO World Heritage site, was targeted.

An undated photo of building in Old Town in Sanaa, Yemen, and the same area after an airstrike on June 12. (Alex Potter)

That war has resulted in nearly six thousand deaths and massive destruction of Yemen's infrastructure. A land, aerial and naval blockade that prevents the import of food, fuel, and medicines has dramatically amplified the devastation. Internationally banned ammunitions including cluster bombs are used, munitions that will stay in the fields until removed, ensuring that destruction and death continue for many years to come.

UN humanitarian chief Stephen O'Brien told the UN Security Council after a visit to Yemen that "the scale of human suffering is almost incomprehensible." Amnesty International has documented "scores of cases of civilians not directly participating in hostilities [who] were killed or injured while asleep, carrying out their daily activities in and around their homes or in their workplace." According to UN reports more than 80% of the population needs assistance, more than 50% is food insecure and half a million children have severe malnutrition. The World Food Program has warned that famine in Yemen is imminent.

The emotional impact of the Saudi war on non-combatants is staggering. Indiscriminate airstrikes at all times of the day and night are terrifying; no one knows where the strikes will hit and who they will target. Stories of devastated families abound. In April an airstrike south of Sana'a hit a home of a university professor, killing the whole family except his eight year old girl who had gone to buy bread for breakfast. Another airstrike at night hit a home of a building guard, killing the whole family except a 12 year old boy who was out. Many in Yemen note, "When we hear the planes, we say the Shahadah," which is a required invocation for people before they die. 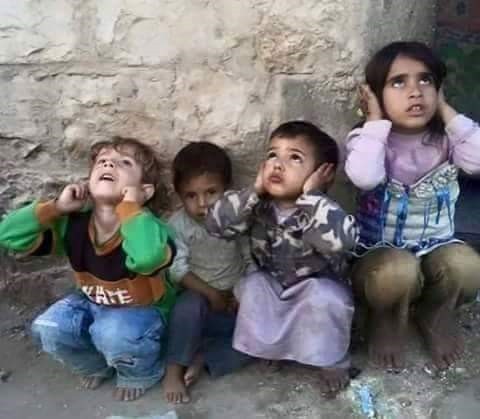 The war has also strengthened Al-Qaeda in Yemen and enabled ISIS to establish a presence there. Both groups terrorize the local population in areas under their control. Al-Qaeda and ISIS are the only groups spared from the Saudi airstrikes, although they control entire areas in Yemen. Despite extensive documentation of massive civilian casualties, many of which qualify as war crimes, the US has carefully sidestepped taking any responsibility for its role in this disaster. Yet the US recently approved the sale of over a billion dollars' worth of "smart bombs" to Saudi Arabia, to replenish the munitions expended during the Syria and Yemen campaigns. A proposed independent UN investigation of the human rights violations in Yemen died over the Saudis' objections.

The President of Médecins Sans Frontières (MSF), Joanne Liu, in accepting the prestigious Chatham House prize a month ago in London, reminded us that "We must uphold humanitarian law; it is our only buffer against anarchy." Today, anarchy is stalking Yemen.

We in the US, a country with so much global power and so little experience with the trauma of war on our soil, have a special responsibility. Americans need to reach out to their representatives in Washington and the White House to express concern about the conflict in Yemen. The messages: stop shipping weapons to the Saudis; pressure them to stop the airstrikes and end the blockade; and press for a political solution. We should sign the Oxfam and Change.org petitions that will urge world leaders to push for a cease-fire and assure that international laws are upheld.

Funding for humanitarian assistance is also desperately needed. Oxfam provides critical material aid in Yemen and welcomes contributions. MSF works in the war-torn areas of Yemen and also accepts donations. Other active and credible groups are the International Rescue Committee (IRC) and the Red Cross.

Is there hope? School in Yemen started again in November, despite widespread apprehension about the safety of the schoolchildren. As one Yemeni mother put it, "Before the war, I used to demand that my children get good grades; now I just hope that they will be alive the next day." Can we do our part to keep that simple aspiration alive?