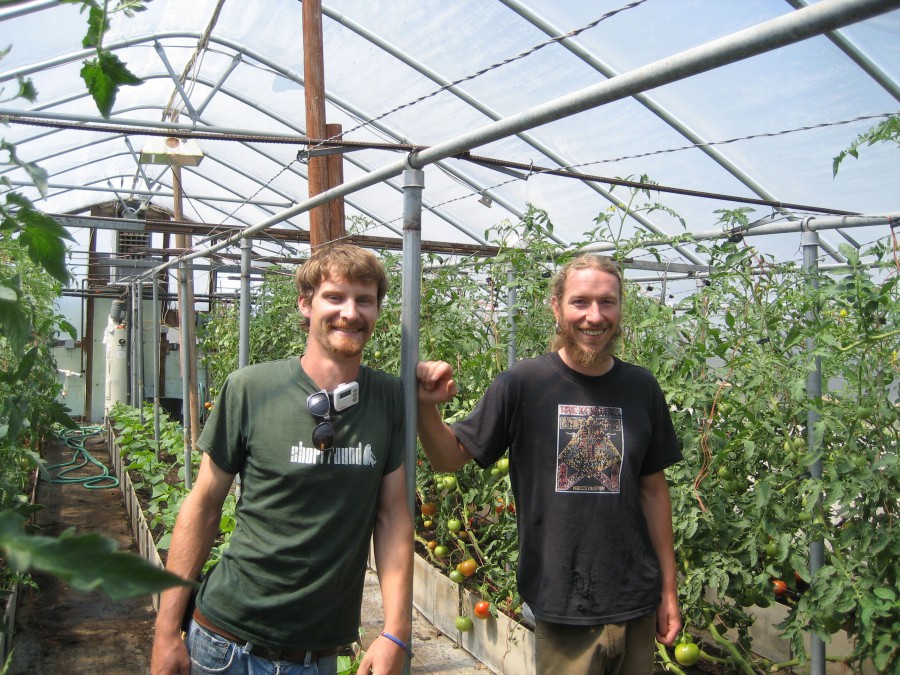 I am a 25-year-old college graduate with a degree from a fairly prestigious eastern university, and I pull weeds for a living. At first blush, you might think I'm overqualified, and after four hours of weeding the squash beds, when the stiffness begins to set in, that's what I start to believe, too. In fact, nothing in college prepared me for this. My only credentials are the past two summers, spent learning by doing: planting, thinning, trellising, fertilizing, tilling, harvesting, washing, packing and, of course, weeding.

I am a farm intern, and to me, the only thing more remarkable than the fact that I have spent much of the past three summers happily stooping over vegetable rows (I am 6'4'') is that I am not alone. Across the country, college students and graduates like myself, many with little or no farming background, have been flocking to small farms in droves, shacking up in old farmhouses, trailers and tents, and working for free or for peanuts, all in exchange for a little instruction in the fine art of running a farm.

"It's almost like a third education after college," said Kelly Coffman, 30, a second-year apprentice at Rain Crow Farm in Paonia, CO. Coffman studied at Prescott College in Arizona and Naropa University in Boulder, CO, and worked in the California state park system and as a kindergarten teacher, before deciding to work on farms. "When you have [a liberal arts] education, you get to a point where you realize wait, I need to have a more basic fundamental education about being human. Food, water, shelter...these things are important," she said.

Although their numbers are hard to pin down, odds are that if you're reading this, you probably know someone who has followed such a path. John English, website manager for the National Agriculture Information Service farm internship bulletin board, a job clearinghouse, said through a spokesperson that postings there have jumped by around 500 per year for the last 5 years, as more small farms spring up and seek the cheap and eager labor that interns provide.  "If you talk to any really good farmer they'll tell you that they've had a doubling and tripling of their applicant pool over the last few years," said Severine Von Tscharner Fleming, an upstate New York farmer, activist and the director of the new film The Greenhorns, which profiles young farmers across the country and explores their motivations. In 2009, Fleming helped found the National Young Farmers Coalition, an advocacy group for those whose taste of farm life has enticed them to take up farming as a profession.

Farming is relentless: it saddles you with endless chores, pins you in one place, and works you to the bone. For much of the 20th century, most Americans tried to escape such a life by fleeing to the city, all of which begs the obvious question: Why would we want to go back to the farm?

The reasons, of course, are as varied as the aspiring farmers themselves. "I realized that I never wanted to work for anyone ever again, and I didn't want anyone to have to work for me, said Benjamin Capron, a 27-year old apprentice in the three-year farm school program at The Living Farm in Paonia, Colorado.  "I wanted to work independently and work with people." Capron, a Denver, CO, native who studied German in college before spending several years working at a brewery and bouncing back and forth between Germany and the U.S., fell in love with farming when he lived on a commune during one European stint. He told me that his motivation to farm comes largely from an aversion to participating in a capitalist economy that he views as exploitative. "Socially, wherever you go and whatever you buy, it supports this slavery in different parts of the world," he said. "The tomatoes you eat come from an indentured servant in California, and my jeans come from a sweatshop in Honduras. So I see [farming] as a way of not allowing for slavery and not being accountable for slavery."

Kelly Coffman of Rain Crow Farm agrees. "I feel like the best thing to do with my time in the system that we have set up is to learn how to not be dependent on it," she said. "This money that's going through the farm that's coming to me and I'm spending on gas, its still very much a part of the culture, but I have a lot less conflicts with this than I do with many other jobs."

This is a common trait among farm interns: a concern for social justice and the environment, coupled with a lack of faith that mainstream political structures can or will address those issues. "[The politicians] are broke, they can't agree on anything, and they're controlled by the corporations," said Fleming, characterizing this attitude. "So if you're interested in changing the world, change a little piece of it, and change it a lot."

Whatever they might think about "changing the world," many other farm interns are drawn to farm work right now by a much simpler need: paying the rent. With interest in farmer's markets and weekly "community supported agriculture" produce shares at an all time high, a farm can look like a strong business opportunity to many young people, particularly those who have foundered in unfulfilling post-college jobs, or endured long spells of unemployment.

Certainly, demand for local food is on the rise, as fancy urban restaurants aim to satisfy their locavore clientele, supermarkets strive to highlight local options in the produce section, and more people catch on to the social and nutritional benefits of farmer's markets. All of this is fueling an increase in farming in the urban hinterlands and within cities themselves, and specialty vegetable operations are a popular choice for first-time farmers, since their startup requires little capital compared to a ranch or a diary farm.

Interns interested in someday entering these growing markets confront the fact that, when starting out, they will probably earn very (very) little. Kirk Wilson, 27, a single-season intern at The Living Farm, earns $80 per week plus room and board for his work, which is more than many farms can offer. But he said he likes working outdoors, getting dirty, and seeing things grow, and is learning the skills to run a small farm of his own someday. Having spent endless hours job surfing on Craig's List, Wilson also knows what he's not missing.

"Before I came here I was working at a [self-storage] place called StorQuest," which was basically the worst job in the world," said Wilson. "I got that job because I was unemployed for five-and-a-half months, ended up doing it for three months, and then was about to shoot myself in the head if I didn't do something else," he said. Wilson, who like Capron is a native of Denver, has a degree in Visual Effects and Motion Graphics and had worked for a post-production house on TV commercials after college. He said he was fired when an ad containing error he had made wound up on the air.  After competing with 400 other applicants for the storage job, only to quit a short time later, he began to feel that he had nothing to lose.

If the flood of applications that show up in farmer's mailboxes each winter are any guide, a surprising number of Wilson's contemporaries share his willingness to do farm work for almost nothing.  The result is a sometimes fierce competition for farm jobs, and a sort of "race to the bottom" where wages are concerned. "The farmer I work for is always saying 'did you hear about such-and-such farm? They work this hard, this much, and they don't even get paid!" said Kelly Coffman. "It's like, am I supposed to feel bad about that?" (Coffman earns $250 per week plus room and board, a relatively high wage that stems, in part, from her three years of farm experience).

"As I've watched in the last 4 years, I get on the farm job websites, and there's less and less availability," she said. "I was just talking to a friend in [organic farming mecca] Ashville, North Carolina, who was saying that she almost feels like you have to have a Master's degree to get a job on a farm there."

Increased competition for such low pay raises a troubling possibility, one that has plagued other attractive but low-paying fields, like journalism: those with bills to pay or families to support, who cannot afford to accept farm wages, may be squeezed out, leaving the best farm jobs to those whose financial safety net (parents, trust fund, etc) allows them the luxury of working for nothing.

The thought of young, idealistic and educated people fleeing to farm in the countryside might evoke, for many, the 1970's "Back to the Land" movement. Indeed, today's farming revival is strongest in areas- upstate New York, Vermont, northern California - that were first seeded with ecologically-minded farmers during the back-to-the-land era, but there are important differences between the two movements. While many back-to-the-landers eschewed technology, farm interns of today are plugged in, skimming for their next job online in their off hours and downloading political podcasts for listening while they pick peas. Organic farming today is bigger business than it was 40 years ago, when organic growers catered mainly to the counterculture movement. Today, organic food is everywhere from Whole Foods to the corner deli, and modern aspiring farmers are more comfortable than their hippie forebears treating their farm like a business, one that is designed to serve these growing markets.

And yet, just as so many "Back to the Landers" eventually left the woods and returned to the lives they had left behind, it's likely that many of today's interns will opt to exit farming, going back to school or taking city jobs, carrying a small piece of the farm with them. The obstacles to becoming a proficient farmer are tremendous: along with the many seasons of experience (complete with all the heat exhaustion, monotony, and backache that those entail), one must also endure razor thin profit margins, unpredictable and increasingly strange weather, and the reality that, if the numbers speak truth, making a living on a small farm is as hard today as it has ever been.

USDA data suggests that the number of hobby farms-those earning less than $10,000 per year-increased slightly in 2010, while the number of midsized farms-those which earn between $10,000 and $100,000, and account for most people who make a living off the land-decreased. And yet, the formation of groups like the National Young Farmers Coalition suggests that there is a contingent planning to stick it out. Their goal seems less about getting rich than simply getting by, and perhaps changing a sliver of the world in the process. "I don't see myself doing anything else from here on out," Kirk Wilson said.