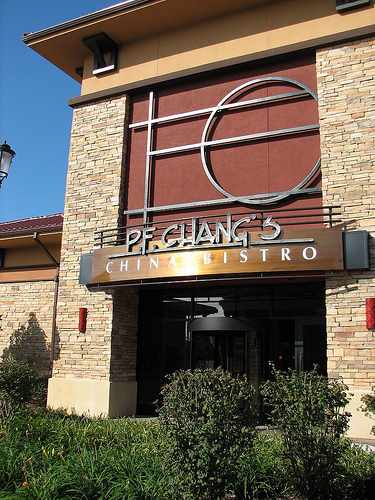 In her book The Fortune Cookie Chronicles, Jennifer 8 Lee highlights the fact that there are more Chinese restaurants in the United States than McDonalds, Burger Kings, Wendy's, Domino's, and Pizza Huts put together. With 41,000 Chinese restaurants, one would assume that there would be a good number of national sit-down chains included in that number. But there aren't.

There's P.F. Chang's with its 200 locations, but its menu doesn't exactly qualify as Chinese food. While the food there is good enough, it doesn't taste Chinese, was probably not prepared by Chinese cooks, and the chain doesn't have Chinese origins. An extensive wine list (do you pair tofu with white wine?), a wide selection of Western desserts, and numerous Southeast Asian and other Pan-Asian menu items (tuna at a Chinese restaurant?) further dilute the Chinese ambiance. Indeed, such factors are probably part of P.F. Chang's appeal to diners who might otherwise find Chinese food intimidating.

In any event, we can safely say there are hardly any national Chinese sit-down chains. It's not that the concept hasn't been tried. The Darden chain, parent company to Olive Garden and Red Lobster, opened its China Coast Chinese restaurants in the 1990s, but it failed miserably. While Panda Express has succeeded in establishing an impressive chain of 1,500 Chinese fast-food restaurants across the country, the number of its sit-down Panda Inn branded restaurants (which were actually launched before the Panda Express chain rolled out) has dwindled to about five locations, all in Southern California. And any number of other local Chinese restaurant chains have tried expanding outside their home area, but without success.

So why aren't there national chains dishing out sit-down Chinese food in the United States? While the lack of Chinese restaurant chains is likely a complicated situation, here are some factors that I suggest may explain the void.

Variety. Chinese restaurants are legendary for their lengthy menus. People expect Chinese restaurants to have multiple selections in soup, noodles, rice, poultry, beef, pork, seafood, vegetables etc. The typical Chinese menu dwarfs the typical chain restaurant menu. Since the hallmark of a chain restaurant is consistency and quality control, it is a daunting, if not impossible task to maintain the necessary consistency over such a broad menu. A chain could open with a more limited menu, but would be greatly restricting its audience.

More variety. Furthermore, most people aren't satisfied with patronizing just one Chinese restaurant. People like to go to multiple Chinese restaurants, particularly since Chinese restaurant menus vary so greatly. Sometimes these variations reflect different Chinese regional cuisines, as there is little overlap between, say, a Cantonese restaurant menu and a Sichuan-style restaurant menu. But even among Chinese restaurants of a similar ilk, there are often wide differences in the dishes offered. On top of this, diners also look for multiple versions of their favorite dishes, as seen by the existence of hundreds of renditions of Springfield, MO cashew chicken in southern Missouri. This desire for wider choices cuts even farther into the audience for a chain restaurant that only provides limited menu choices.

Even more variety. Chinese food is not uniform across the US. Besides the unique regional Chinese American dishes mentioned in my prior Menuism article, there are also general regional differences in Chinese cuisine. Chinese food in the South differs from that in New England, and that from big cities like Los Angeles, San Francisco and New York. Favorite dishes may vary from area to area. When I first visited Minneapolis in the 1970s, I was stunned by the number of restaurants specializing in chow mein. A city with a negligible Chinese population was even able to support a number of fresh Chinese noodle factories. If the mark of a restaurant chain is standardization, here is yet another significant barrier.

Cost structure. Chinese restaurants quite often rely on family labor, particularly in the operation's startup stage, and are often owner-managed, with owners and family members working the equivalent of double shifts. Chinese restaurants also employ a lot of undocumented workers, as well as legal immigrants with few English language skills and few job alternatives. These arrangements provide a significant cost advantage over the cost structure of a national chain with professional management, and would be difficult for a national chain to match.

Competition. A restaurant owner in Springfield, MO asked me how he could charge more for his food. Springfield has almost 100 Chinese restaurants in a city with a population of 170,000. Basically, I told him with so much competition he's out of luck. Furthermore, there is no shortage of Fujianese American restaurant workers in the eastern half of the United States who, as indicated in my previous Menuism piece, share the ultimate dream of someday owning their own Chinese restaurant.

Who's in the kitchen? I suspect I'm not the only diner who is dubious about Chinese food not prepared by Chinese chefs. There is an ongoing debate as to whether one has to be Chinese to be able adequately prepare Chinese food. One's sense of equality would lead to a negative response, but somehow there is still an expectation that good Chinese food requires a Chinese chef because there is something cultural about the preparation of Chinese food.

Local preference. There are some goods and services where people are more inclined to prefer a local or regional source. For many years this was the case with banks, though lately that has changed markedly. Likewise with bottled water where New Yorkers drink Poland Springs, Floridians like Zephyrhills, Texans like Ozarka, and people in D.C. like Deer Creek or water from North Carolina. In this regard, there is something about going to your neighborhood Chinese restaurant and interacting with the owner, which cannot be duplicated by a chain restaurant.

If you can think of other reasons for the lack of sit-down Chinese restaurant chains, I'd be glad to hear your ideas.

Related Links from the Menuism Chinese Food Blog:
• It's Monday Night in NYC. Why So Many Chinese Wedding Banquets?
• Chinese American Regional Restaurant Specialties
• Why Do Some Restaurants Change Their Names So Often?

David R. Chan is a third-generation American who has eaten at 6,297 Chinese restaurants and counting. He maintains a spreadsheet of each of his culinary conquests -- a document he began in the early 90s, when he bought his first home computer. "When I entered the workforce in the 1970s, that coincided with the rise of what we think of as authentic Chinese food in North America," Chan told the LA Weekly Squid Ink blog. "As such, my goal was to try every authentic Chinese restaurant in the Los Angeles area at least once." He has extended his list to New York, San Francisco, and thousands of restaurants beyond. Still, Chan admits, he can't use chopsticks.