I know that I am not the only one that has noticed the pattern. On Thursday, James Holmes, a 27-year-old white man, was found guilty of the murder of 12 people (70 others were wounded) in a Colorado theater shooting in 2012. Dylan Roof, a 21-year-old white man, has confessed to murdering in cold blood nine parishioners of Mother Emanuel Church in Charleston, South Carolina in June of this year. Days after that shooting, a 21-year-old white man, Dzhokhar Tsarnaev, was sentenced to death for killing three people (and being responsible for the death of a fourth) while injuring over 250 more at the Boston Marathon bombing in 2013. And at the end of 2012, 20 children and six adults were fatally shot at Sandy Hook elementary school by 20-year old Adam Lanza after he shot his mom in their home in Newtown, Connecticut.

These recent examples are just a few of many mass shootings that have been committed by young, "innocent"-looking, 20-something-year-old white men. So, here's my question: Why aren't we more afraid of them? Why haven't they been demonized or stigmatized as a group? Why are there no stereotypes catching hold or preventing young, white men from being trusted and welcomed into our places of work, schools or houses of worship? We don't run for cover or get out of elevators when we see them. We don't cross the street clutching our purses or ask security to keep an eye on them. Police don't just pat them down in the street. We don't decide not to live in the neighborhoods in which they live.

Don't get me wrong, I am not suggesting we start marginalizing and being suspicious of all 20-something white men. We all know that would be wrong. After all, we know that there are a whole lot of really trustworthy, non-violent young white men who grow up to be great fathers, leaders and neighbors, just as there are young men from every racial and ethnic group and economic background who do the same.

What I want to point out here is how the category of "young white men" has emerged from all of these horrible incidents unscathed as a group -- and how this is one of the starkest examples of white male privilege imaginable (or another term I use, "unearned advantage"). Unearned advantage is how we describe the fact, for example, that virtually all of the culprits on Wall Street who were responsible for bringing our economy to its knees in 2008, the politicians and corporate figures found guilty of premeditated, injurious and heedlessly greedy crimes are white men, but white men are not condemned as a group for their behavior. In fact, some part of us thinks that would be silly.

However, whenever a black man appears on the nightly news or in the newspaper having committed a crime, the automatic association, the schema or framework that most people default to renders black men (as a group) as mostly dangerous, menacing and scary. I believe it is even worse for young black men. In fact, in 2014 the American Psychological Association released a study found that, "Black boys as young as 10 may not be viewed in the same light of childhood innocence as their white peers, but are instead more likely to be mistaken as older, be perceived as guilty and face police violence if accused of a crime..."

The way unearned advantage works is that if one is a member of a group that has been deemed by society for centuries as superior or as "better than" and does something that isn't good and smart and right, his behavior is attributed only to him, is ignored or explained away, so that the group's supremacy stays in place. In the cases of the mind-numbing violence I cited at the beginning, we find other things to talk about: We talk about mental illness, about catching signs of tendencies earlier; we talk of the role of the school counselors, of the psychodynamics of the family that the killer came from -- all powerful and heartfelt and useful avenues to explore. We rarely mention race or gender as issues that might be relevant. However, if an individual from the "less than" or "one down" group does something bad, his behavior is confirmation of the negative group stereotype, evidence that group presumptions about inferiority are accurate. 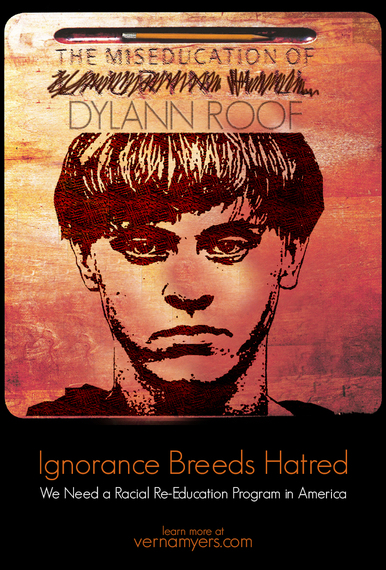 In this situation, it appears that there is nothing young white men can do, including killing lots of innocent people at a prayer meeting at church, that will tarnish the positive bias toward that group and there is nothing amazing enough that black men can do that will allow them to escape being perceived as the ones to be feared.

The fact that all young white men who walk into a school are not presumed to be Eric David Harris or Dylan Klebold, the architects of the massacre at Columbine High School, is not the problem. Not being treated with the benefit of the doubt is the problem. Not being given a chance to be judged on your own merits is the injustice. Again, I am not advocating that we begin seeing young white men as villains. Just the opposite, I am saying, wouldn't it be great if young black men could enjoy the chance of being seen and judged for who they are, good or bad? Wouldn't it be wonderful if black people were not painted with the brush of negative stereotypes or judged by the actions of some other black person? What would it mean to be relieved of the exhaustion, the anxiety and sometimes the physical harm that comes with being viewed first through the lens of negative biases and assumptions?

One thing that it could mean is a much needed rest for everyone in our society. Because, while many Blacks and other marginalized groups are constantly fighting against the fatigue of racism and oppression, it is also tiring for all people to be constantly in suspicion, fear and ignorance about another group of people. This preoccupation also robs us of precious opportunities to connect across our differences and to experience the richness of our humanity. It sustains a feeling of discomfort and distance. It prevents us for extending to others the empathy, understanding and opportunities that we all want and need.

Some of us think that we can protect ourselves by sealing away from certain groups and surrounding ourselves with people who are like us. But, I would hope that by now we are learning that this type of exclusion will not keep us safe. We have to face the ills in our society together, connected, and doing whatever we can to confront the biases that separate us.