Star Wars has long been considered a metaphor for a lot of things. When the first film came out in 1977, there was speculation that it was a metaphor for the Vietnam War. When the fifth film came out, some (even me) speculated that the corruption in the Senate was metaphorical of our own congressional situation heading into the Iraq War. Over the years there have been plenty of real life lessons to be learned from the Star Wars films ranging from "be nice to everyone, even if they're annoying" to Yoda's famous "do or do not, there is no try."

But the list of metaphor and stories has been growing exponentially with the television show The Clone Wars, which has been airing Friday nights on Cartoon Network. Some have dismissed it as merely a kids show, but this just might be the best written (and best looking) show on television. It's grown quite a lot in its three years on the air and just keeps getting better and better.

For readers of Huffington Post, it's interesting to note that The Clone Wars has tackled (and come down on the right side of) issues ranging from the banking industry, political corruption, lobbyists and corporate greed to the morality and ethics of war, and the right to health care. And it's all in a format that kids and adults can love and watch together.

I watch the show every week with my two kids (aged 7 and 8) and the more political episodes always spawn very interesting discussions with them that gets them thinking about important issues of the day.

I spoke to the Supervising Director of The Clone Wars, Dave Filoni, about the political angles that have become more and more prevalent on the show:

In a way Star Wars has always been a mythology and a fantasy world. And what's always interesting to me is that the villain in this fantasy setting has always operated in this realistic political manner in order to achieve the goals he's trying to achieve. The Jedi never suspect this politician of being any more evil than the standard clichéd views of politicians. It operates in a way that there is this big machine that Chancellor Palpatine [later the Emperor] gets control of and though there are people using the democracy as best they can, Padme and Bail Organa, there is this whole other machination of greed going on. And the things that are feeding the politics in our stories is motivated by greed, corruption, and things that you would classically see as the downfall of villains in a fairy tale. It's the same as you always see in Star Wars but we now have time to develop it more on Clone Wars.

This week sees the third season finale of The Clone Wars and it's also the return of a favorite character from the Star Wars saga: Chewbacca the Wookiee. Filoni said of this episode:

It's that classic scenario where someone is captured and stranded and in a very desperate situation and you wonder how they're going to survive and are people going to work together to survive. And it's the episodes I've been teasing. And this is the episode I've teased as being very inspired by Predator.

And that's another thing adults can look forward to with this show: stories they'll recognize from some of their favorite movies. There have been episodes and characters based on Carol Reed's The Third Man, Alfred Hitchcock's Notorious, Akira Kurosawa's Seven Samurai, Lee Van Cleef from Good, The Bad, and the Ugly, King Kong, Godzilla, and more. In fact, Filoni said:

For some of our more political episodes, we studied and emulated movies like Chinatown to get better on how corruption plots work.

When I was a kid I remember Star Wars being the first big thing my dad and I really sat down and I knew he liked. He wasn't a crazy fan of it, but he was always into opera and it was kind of like space opera. That was always a big creative bridge between us to talk about the music of Star Wars and of the operas he liked. I get a lot of comments from people that they watch Clone Wars with their kids and this is a family Friday night, even when the shows are sometimes fun and whimsical and sometimes more intense, they like to sit there and talk about what the show will say. And I think biggest compliment we can get on this series is that we're getting generations to sit down and watch it in this fantastic world that George created. 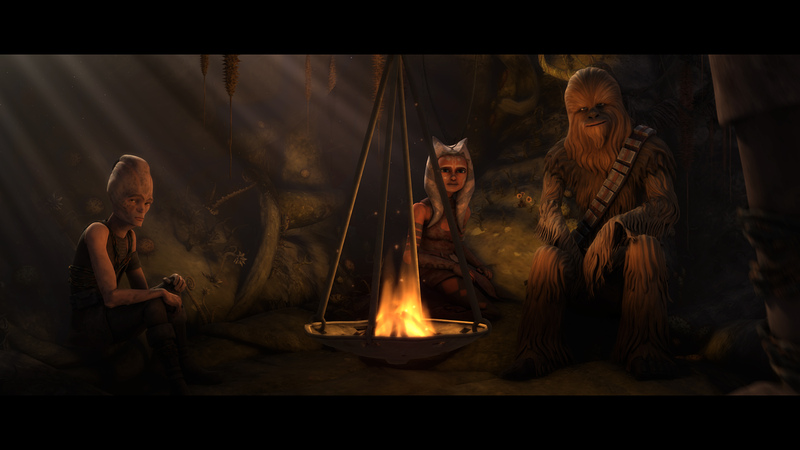 Attached above is a new, exclusive photo from the season finale of the show. Anakin's padawan learner, Ahsoka, is stranded on a planet with Chewbacca the Wookiee, long before he meets Han Solo. It airs Friday night on Cartoon Network and will be a special two episode, hour long presentation. Be sure to check local listings for showtimes. Season One and Season Two are currently available on Amazon at more than half off MSRP.

You can read more of my interview with Dave Filoni on Big Shiny Robot!

Bryan Young is a filmmaker and the editor of the geek news site Big Shiny Robot!