Graham Moore encouraged the kid out there who doesn't fit in to #stayweird in his Oscar's acceptance speech because he knows that his "weirdness" comes from a perfect and authentic part of himself; it's what makes him "different" and creative. 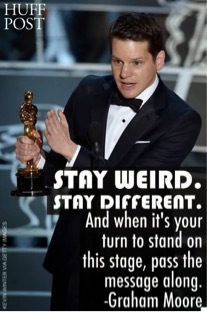 "When I was 16 years old, I tried to kill myself because I felt weird and I felt different and I felt like I did not belong. And now, I'm standing here. And so, I would like this moment to be for that kid out there who feels like she's different and she doesn't fit in anywhere. Yes, you do. I promise you: You do. Stay weird and stay different."

I find his advice particularly encouraging today in light of the strong indications that Govorner Asa Hutchinson will allow SB 202 to become law midnight Monday without a veto or a signature. Last week, I penned an open letter to the Arkansas LGBT Community that also became my first HuffPost Blog and resulted in a HuffPostLive interview later that week. As discussion of this discriminatory bill grew, Michelangelo Signorile wrote an article highlighting the lack of political, business and even gay leadership against SB 202. Pathetically, Walmart made a small announcement after business hours Monday which landed like a feather, when that same announcement the week before might well had made the difference. There will still be a 90-day window before the bill becomes a law and it's likely that it will be met with lawsuits and the tax money Arkansas could use for education, infrastructure or other services will be tied up in court defending this indefensible bill.

The whole experience has been an eye-opener. I was overwhelmed, surprised and amazed that so many people read and thanked me for sharing my voice. Sometimes they related similar challenges and issues in their own families. Friends from the past reconnected with me to support me in the face of what they knew would generate opposing, and sometimes nasty, reactions. Indeed, hundreds of people read, or didn't read, and then commented on the letter or associated posts and articles that carried the story. The nastiest one, which was taken down by the site before I could get a screenshot, referred to me as a "filthy sodomite" but apparently that SB 202 supporter didn't know the band name was already taken. 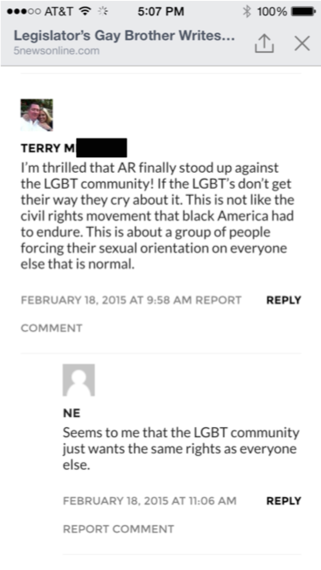 The comment that struck me the most was from Terry M. in Arkansas. Terry wrote
that he is thrilled that Arkansas has stood up against the LGBT community, even as no Arkansas lawmaker who supports SB 202 will come out and admit that SB 202 is a statewide anti-LGBT bill, except Sen. Bart Hester (R) who originally told Buzzfeed News that he wrote it because of what happened in Fayetteville around the recall of the anti-discrimination Ordinance119.

Beyond suggesting that the movement for LGBT Rights is not like the civil rights movement he said, "This is about a group of people forcing their sexual orientation on everyone else that is normal." I have been a public school teacher for nearly 20 years and I have worked with thousands of students and I have yet to meet the "normal" one. I have met quiet ones, hyperactive ones, smart ones, unmotivated ones, and every kind of kid in-between, but the idea that there is some superior "normal" kid is the start of the mindset that separates us and leads to the creation of a bigoted bill like SB 202. Normal is a setting on a washing machine. People are individuals, with varying degrees of skills, talents, fears and abilities. My lesbian sister is not normal, and never has been - she's extraordinary. She's a Harvard MBA and senior tech exec who had to pay $10,000 to adopt her own children because of discriminatory laws that predated her ability to marry her wife last year. Nobody is telling LeBron James or John Legend to be normal.

No, I don't think the issue is trying to be more normal; it's trying to be more yourself, even if, as Graham Moore felt as a teenager, that self was different or weird. Weird and different is what new, creative, authentic, independent and innovation looks like before it's understood. People like Moore confuse or scare the followers who don't understand someone who thinks differently, and scare themselves because they don't understand yet why others don't think differently. These people who are judging and separating haven't been forced by circumstance or difficulty to look inside and explore their own inner world to connect to their own unique "weirdness" which inevitably becomes their greatest strength. Nobody else has what is uniquely our own expression of self; it's our gift to both ourselves and others. And if that kid Moore was talking to during his Oscars speech is reading this blog, the trick is to learn to love the bigot and work to eradicate the bigotry.

The challenge is learning to survive the fear of becoming yourself while at the same time letting go of the illusion you can be "normal, like everyone else" even as that letting go raises uncertainty and a type of groundlessness. It takes courage and friends and adult allies' help. In his Oscar speech Moore bravely spoke of his suicide attempt at 16. Sadly, roughly 5,000 teenagers in the USA commit suicide each year. Worse, nearly 100 times that number strongly considers suicide. All this month I have been working with students on my campus to present our Yellow Ribbon Suicide Prevention Week in March on our campus to raise awareness and help teenagers know it's okay to reach out and ask for help. It's a result of my work with these types of programs for the past two decades that I have come to learn
our understanding of one another comes from respectively and honestly interacting with each other. That becomes difficult when being honest can cost you social status, your safety or even your right to attend school.

When SB 202 becomes a law it will, by its intention, put a chill on the ability for LGBT people in the state to be honest about who they are without the legal protection in the event of harassment or an unlawful firing. Lambda Legal says, "...it will amount to a giant, flashing, 'Gays Stay Away' sign." Subsequently, LGBT youth will also grow up in that same difficult, biased and possibly unsafe situation. 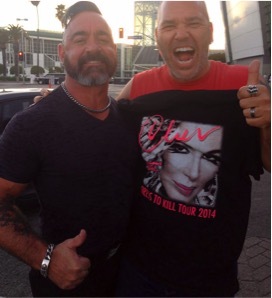 Cher, the baddest bitch on the planet, unequivocally came out in support of Veto SB 202 and has been an outspoken advocate for LGBT rights soon after Chastity came out. She spoke at the National PFLAG conference in 1997 and Cher has continued to speak out for acceptance and rights as Chaz has continued his own journey. Cher has embraced her own uniqueness like few others which I think is why she has been able to embrace the "differentness" of her family.

For the 57 Legislators who voted for SB 202 it's now on you to provide a bill with LGBT protections since you took that local control away from every city and town in Arkansas. However, the climate in Little Rock isn't particularly friendly toward LGBT rights and, as predicted, SB 202 is contagious. In Texas, Sen. Don Huffines filed SB 343, a bill in Dallas to remove LGBT protections with similar arguments as the ones used in Arkansas. Despite having a Texas city known for keeping it weird the threat in Texas, and in the 28 other states which have communities with LGBT protections, is now real. All are now in danger of the spreading of this type of anti-LGBT activity described by Tony Perkins, head of The Family Research Council, as a "roadmap for other states."

It's time to let our business leaders, our political leaders and our own representatives know we recognize, as Signorile says, #ItsNotOver, and the backlash to the progress in marriage equality is already in full swing.