Today isn't exactly the most enticing of Christian holidays: it's got no beautiful decorations, no gifts or trees or beloved carols, no festive parades or fancy hats. There aren't Champagne toasts, sugarplums, or party tables laden with hams and roast goose: in fact there's no food at all. Nobody gets a nice greeting card for Ash Wednesday: you just have some dirt smeared on your face and are informed, bluntly, that you're going to die.

And yet Ash Wednesday has become one of the most oddly visible days in the Christian calendar, attracting new attention from believers and reaching people who don't consider themselves part of the Church. There's a growing movement around the country to take Ash Wednesday services outside of church buildings, offering ashes at bus stops, malls, city parks and suburban train stations. For the last four years I've been observing Ash Wednesday in the streets of San Francisco, one of the nation's most secular cities. And over the course of an afternoon, hundreds and hundreds of strangers will come up, call out, even follow me down the sidewalk, asking to receive ashes.

The practice of imposing ashes and fasting, echoing the mourning and repentance rituals of Israel, began in the early Church; by medieval times Ash Wednesday services were a regular part of the Christian year. The observance was intended to orient the faithful to Lent, reminding believers of their mortality and calling them to forty days of prayer in preparation for Easter. For a long time Ash Wednesday liturgies, with their call for repentance, were identified with the Roman Catholics alone; in the twentieth century, Episcopalians, Lutherans and some other mainline Protestants joined in the practice. Sterner evangelicals and most nondenominational Protestants still don't observe Ash Wednesday; neither do the Orthodox churches, though they hold "forgiveness vespers" to mark the last Sunday before Lent.

But I believe the power of the ritual doesn't depend on familiarity with ancient Church history, or on one particular form of liturgy. The essential words people are so hungry for, spoken as a cross of ash is marked on each forehead, are plain and timeless: Remember you are dust, and to dust you will return.

Why would anyone want to remember, much less celebrate, the fact that you're going to die?

Because it's the truth.

"So much effort goes into looking good, and working hard, and pretending we're in charge of life and death," says Will Hocker, a priest and hospital chaplain who notes that "even doctors" come to get ashes from him on Ash Wednesday. "What a relief to have a day when you're just another person with a smudge of dirt on your head."

It's rare in our culture to admit, in public, that you're not in control--that you, basically, are not God. And given the din of advertising and political polemic and hype and doublespeak surrounding us, it's rare to escape the fantasy that money or science, fame or violence or shiny objects will somehow save us from death.

So Ash Wednesday, when we bow our heads and acknowledge the common truth of our mortality, is profoundly countercultural--and profoundly real. It hit me hard one year when a young Guatemalan mother, sitting in MacDonald's, unwrapped her tiny baby and asked me to give him ashes. It felt almost unbearable to look into the eyes of a month-old child and tell him he was going to die. But I touched the baby's forehead anyway, and said the words, and his mother said, softly, "Thank you."

Why would anyone say "thank you" when a stranger tells you you're going to die?

Because it's the truth.

Almost invariably, the people I give ashes to-- parents, old ladies, gang kids, hipsters, day laborers, drunks-- say "thank you." I say it, too: touching strangers with such intimacy in public, admitting what we share, feels like a gift, one that turns the lies of our culture upside down. "It's like every time your thumb touches a forehead, time stops," a friend said, watching. "Time just stops, over and over."

The streets are always full of people going about their various business: buying and selling, kissing and fighting, suffering, hanging out. And one day a year we get to stop, look at each other and tell the truth. We're dust. And that, as we say on Ash Wednesday, is a blessing.

Sara Miles is the author of City of God: Faith in the Streets, ; her other books include Take This Bread and Jesus Freak. She works as Director of Ministry at St. Gregory of Nyssa Episcopal Church in San Francisco. 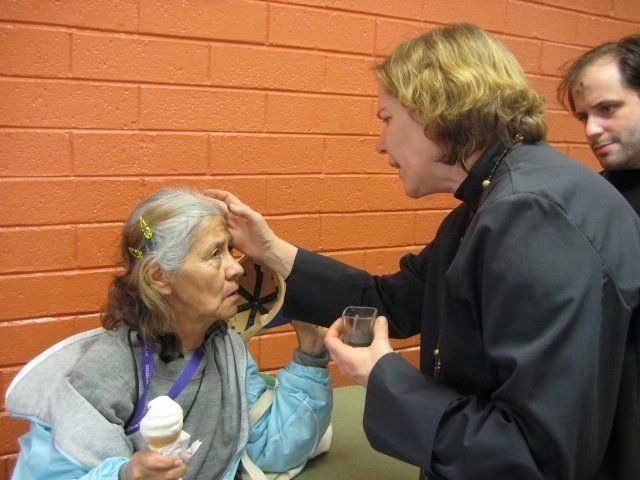