With the debt ceiling debate only recently concluded, I've been of the mind that we could use some period of serious reflection, in which we ask ourselves difficult questions like, "What impact will removing trillions of dollars from the economy have on ordinary people?" and "Who has any leverage now to do something about the unemployment crisis?" and "Now that this hostage-taking technique been deemed to be the most effective way to govern, what does the future of American lawmaking look like?" These are all matters with which we've not yet begun to come to grips, and the consequences of this week's decision could be very sobering, if not dire.

But, apparently, I'm the only one who thinks like that. As I noted yesterday, journalists think the debt ceiling deal -- with its "Super Committee" and "trigger cuts" -- is just straight-up genius. So, naturally, it's time to celebrate! So why not learn to stop worrying about the lives of ordinary Americans and love the debt ceiling deal -- or at the very least, learn to love the way the good people at Politico covered all of the exciting action!

At a bar. At eight in the morning. On a Wednesday. (No one is promising that this party won't be lame, just massively self-indulgent. 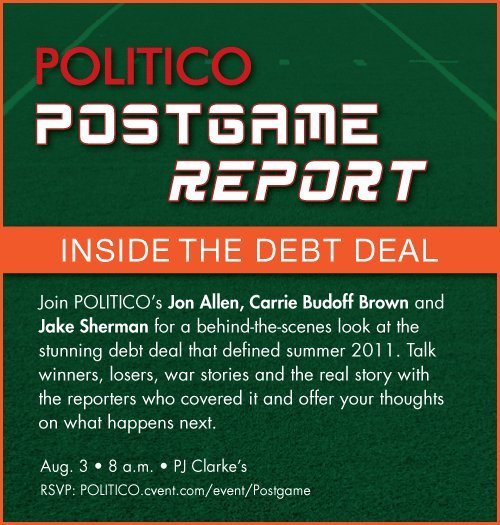 This is the sum total of Beltway journalism, distilled to its essence, folks. There's no sense in fighting it. That said, I will give $100 to the first attendee who gets thrown out for blasting DMX's "Party Up" on a boom box.

So come one, come all, and celebrate the debt ceiling deal! Sure, we've no way of knowing if steep spending cuts will imperil the government's ability to regulate the sale of poisonous toys from China, but that's not journalism's job to worry about.