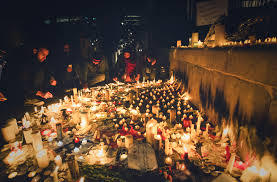 The evil people in this world have but one goal, and that is, to make the good people of this world suffer. Now, they may, for a time, instill fear and sadness. However, what are the real effects of their evil acts? The real effects are not a concept that they, themselves, can envision because they cannot see past their own hate and misery. They are unable to see that their efforts only serve to backfire on them and ultimately thwart them in their mission.

We know in our hearts that what was meant for our harm will always be used in our favor. And so, when evil-doers perpetrate unspeakable crimes against us, this is actually what they do, not to us, but to themselves....

1) They Expose Themselves
They want the civilized world to pay attention to them, but when they get our attention, they lose big time! Their arrogance is their downfall. They bring their dark ways into the light where they can be seen. They are their own worst enemies. Drawing attention to themselves only allows them to be found and eradicated.

2) They Wake a Sleeping Giant
Universal Law is quite clear...The Universe reflects back to you what you put out there like a mirror. If you intentionally harm an innocent one, be it a person, an animal, or the planet, guess what is going to happen to you? There is always an even exchange of energy taking place. Thus, the more negative, dark energy one creates, the more that energy will be reciprocated in kind. In turn, The Good will always receive more good, which means those who are evil can never win, because they bring the evil they do back on themselves.

3) They Create a Backlash
They do not expect us to replace our temporary fears with love...a deep-seated, fierce love for humanity. Our boundless determination to live in a loving, free world - in stark contrast to the type of world that they support - is ignited in us like wildfire. When we witness the suffering of others, we come together as one, as brothers and sisters. We see ourselves as human beings on the deepest level. We feel compassion to the core of our souls and unite in strength beyond measure.

The time is now when humanity says, "Enough is enough!" The time is now for the good people of this planet to create so much light that the darkness has nowhere to go. Make no mistake about it...light can and will extinguish the darkness until only light remains. Theirs is an empty and hopeless existence; whereas, ours is filled with the hope and goodness of the human spirit, which always prevails!