"Why do I have Aspergers in my brain?"

This question was asked by my son at age 4. It was asked just after we were served our drinks at a busy diner my sister and I had stopped at for lunch with the kids. My sister looked up at me with surprise and her eyes began to brim with tears. I was completely caught off-guard and lost for words. I stared at my son's cherubic face and my heart ached over how I could possibly explain such a complex diagnosis in such a public place while honoring his curiosity and right to understand himself.

"Why is school so much easier for all the other kids? Why am I the only one having a hard time? What's wrong with me?"

These questions were asked by my second son at age 8. For many years, he had an innocence and lack of awareness about his struggles. In third grade, that started to change. I knew it was time to tell him his diagnosis when he started to doubt himself as a person. It was time that he knew that he was not a "bad" kid who didn't listen or couldn't understand, but an amazing child who was able to do what he did each day despite the challenges autism created for him. It was time for him to understand the gifts that autism had given him, but also embrace and know why other things were a challenge.

This was said by my third son at age 7 when I arrived at the nurse's office at school after being called for a prolonged meltdown that could not be calmed. I knew then that it was time to talk about autism. He deserved to know that he was not alone. That he had a community. And I knew he no longer belonged in an integrated classroom. It wasn't working. Later that year, he was moved to a sub separate language-based classroom and it brought him such peace. He later shared with me, "At my old school, I used to wonder what was wrong with me every day. Now I don't even think about it. I just learn."

I am the mother of four children, three of whom have autism spectrum disorders. I have had to look three little boys in the eye and share their diagnosis with them. It was always hard. It was always painful. It was always scary for both of us at first. But from my experiences, I have learned two things to be true.

The first is that there is no correct answer about when to tell your child about their diagnosis. This was true in my house alone. My boys have three very different levels of autism, and they were told at three different ages, and in three different ways. My oldest son had put things together at a very young age from all the doctor and therapist appointments and simply asked the question. For my other boys, I knew it was time to tell them when they began to be more aware of their differences and doubted themselves because of them. Every parent knows their own child best. You know when they might be ready to understand and handle the information. Be open to the suggestions and stories of others, pay close attention to your child's feelings and maturation and then do what you feel is right for your child and family.

The second thing I know to be true is that sharing the diagnosis with your child allows them and your family to fully embrace all that autism means for them and the wealth of resources available. There is so much help available and a wonderfully supportive autism community that is hard to take advantage of if you haven't shared the truth with your child. I believe strongly that the truth sets you free. It is hard for any person to make the most out of their situation in life if they are not able to embrace it or talk about it with others. I feel strongly that keeping anything hidden encourages the notion that there is something shameful about that which is not being discussed. Dr. Brené Brown states wisely that "shame needs three things to grow exponentially in our lives: secrecy, silence, and judgement." Although I cannot control the judgement of others, I can empower my children by erasing secrecy and silence. It is not something to be ashamed of, and we will never positively change the public's perception of autism if we as parents treat it as such.

Many parents feel paralyzed by figuring out how to approach the initial discussion. I kept the first conversation simple, creating space and encouragement for questions and whatever feelings came up. It differed slightly for each boy, but the overall conversation went like this: "Every person has things that are easy for them and things that they are working on. Your brain works in a very special way that is called autism. It means that some things that are hard for other people, like remembering numbers and all the states and capitols, are easy for you. But it also means that some things, like understanding conversations or what people are trying to say, can be hard for you. It is why sometimes noises, smells and the feeling of things bother you too. But it also means that you are amazing for how hard you work to get through it all! There are a lot of strategies we can use to help make the things that are tough a bit easier. There are lots of people in the world with autism and so many of them have done amazing things. Would you like to learn about some of them?"

They each responded differently. My oldest, who was the youngest at the time of the conversation, was very matter-of-fact about the whole thing. My youngest son said, "My friend Tommy has autism, I can't wait to tell him I have it too!" With my second son, it was the most heartbreaking. His eyes immediately filled with tears. He cried and yelled, "Well, I don't want it!" His older brother came in from the other room and hugged him and said, "It's OK, Jack, I have autism too. It will be OK. We will be OK." We all held each other tight for a long time. It was one of the saddest days I've had on this journey.

After the initial tough conversations, however, things only got better. We spend a lot of time talking about the gifts of autism. We read and watch programs about the many talents and successes of people who are on the spectrum. We attend the AANE art show and admire and support such talent in person. We have helped each of the boys to find what areas bring them joy and where their talents shine. My oldest son has won his middle schools trivia competition for two years in a row and belongs to the chess club. My second son sees art in everything and creates it everywhere. My youngest son loves to create games and has a heart so open and an enthusiasm for life so big that his love and spirit are contagious to all he meets.

We face the struggles that autism brings openly and involve each of the boys in working on their own strategies and solutions. We emphasize that the challenges of autism are not character defects but simply a difference in the way their brain is operating. When they have been able to view their troubles in this way, they have been able to work on their difficulties without feeling bad about who they are. Having autism, is like having anything else. A person who has diabetes has to adjust their diet and monitor their sugars, but it does not define them as a person. They are in fact to be admired for the extra effort that is required to keep their blood sugars healthy when everyone else around them has a body that does it with no effort at all. The same is true of people living with autism. Such bravery, such tenacity of spirit is required to walk in their shoes. I often take the time to gaze into each of my boys' faces and tell them, "You, my friend, are my hero." 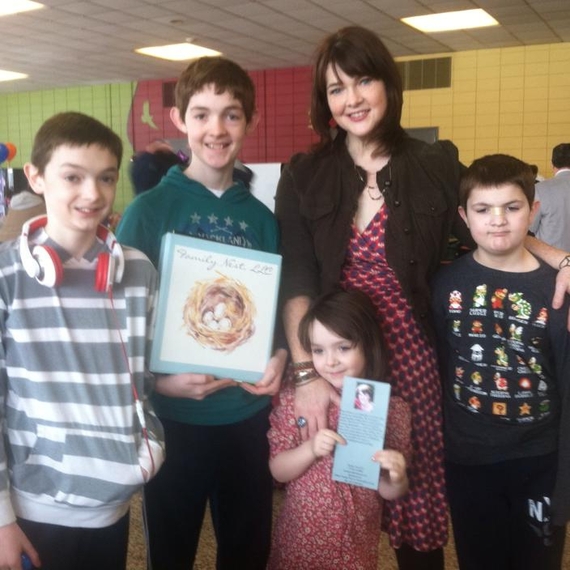 More:
ParentsAutismdisclosureparents-moms
Newsletter Sign Up
Raise the kind of person you'd like to know
Subscribe to our parenting newsletter.
Successfully Subscribed!
Realness delivered to your inbox