I'm often asked why I care so much if creationism is taught in public school science classrooms and laboratories. My passionate response touches on a host of important issues, issues that most people living in a democratic society really should care about.

The nonsensical battle between creationists and scientists is important because its very existence demonstrates just how scientifically illiterate so many citizens are. Indeed, evolutionary theory represents the best science has to offer.

Ever since Darwin published "On the Origin of Species" in 1859, evolutionary theory has offered numerous testable predictions, predictions that have consistently been supported by reams of data from paleontology to molecular biology and from developmental biology to genomics. Creationism, on the other hand, in all of its guises, makes no falsifiable predictions and offers no insight into the structure of the world around us. Simply put, pretending that the two are on an equal intellectual footing encourages people to completely misunderstand the nature of scientific investigation and promotes pseudoscience. The consequences of having a voting public that embraces the nonsense of pseudoscience should be self-evident to most.

As the great biologist Theodosius Dobzhansky so cogently put it in the title of a paper he published in 1973, "Nothing in biology makes sense except in the light of evolution." Replace evolution with creationism and modern biology becomes an incoherent collection of random pieces of data. The context that makes the science an integrated whole vanishes without evolution. And without that context much of modern medicine, agriculture, psychology and neuroscience, to name just four fields, becomes meaningless. To make matters worse, creationism also dismisses a good deal of modern anthropology, archeology, astronomy, chemistry, linguistics and physics.

Even if you don't care about science or science literacy, you should be concerned about what happens when creationism enters the educational arena. Creationism is the embodiment of one single religious worldview. Treating that religious worldview as science privileges one religion over all others. In addition to completely confusing religious and scientific methodology and the purposes of each, it is utterly disrespectful of those who practice a different faith as well as those who practice no faith.

Those of us who have been working to ensure that education remains both meaningful and valuable and is not controlled by those with partisan interests, and there are many of us working together toward this end, are aware of a larger truth. Those promoting creationism, regardless of the rhetoric they employ, view education dramatically differently than those who recognize the importance of science. Creationists believe that education is about teaching students what to think while those opposed to creationism believe that education is about teaching students how to think.

Creationists have long argued that they're in favor of these things as well, but their actions demonstrate otherwise. In fact, the most egregious of these actions, the platform adopted by the Republican Party of Texas this year, categorically puts an end to this debate. In clear and dramatic prose the Republican party in the state that has most aggressively attacked the teaching of evolution has stated: "We oppose the teaching of Higher Order Thinking Skills (HOTS) (values clarification), critical thinking skills and similar programs that are simply a relabeling of Outcome-Based Education (OBE) (mastery learning) which focus on behavior modification and have the purpose of challenging the student's fixed beliefs and undermining parental authority."

That entire sentence is absolutely frightening, but let's distill it down to is most simple meaning: "We oppose ... critical thinking skills ... which ... have the purpose of challenging the student's fixed beliefs and undermining parental authority."

The Republican Party in Texas believes that students enter school with "fixed beliefs" and nothing they experience in that setting should alter those beliefs. Anything that encourages students to think and grow, apparently, is off limits.

The 22-page Republican Platform is filled with startling items every bit as disconcerting as this. The document asserts that the concept of the separation of church and state is a myth, urges public schools to teach "the Judeo-Christian principles upon which America was founded," and urges "Congress to withhold Supreme Court jurisdiction in cases involving abortion, religious freedom, and the Bill of Rights."

If these things scare you, as they should, take a look at the Texas Freedom Network's (TFN) analysis of the platform. As it has on so many important issues, TFN has performed a great service with its examination.

Let's return to the evolution/creation controversy. A quote from the great American philosopher George Carlin fully and simply explains why I care so very much about this issue: 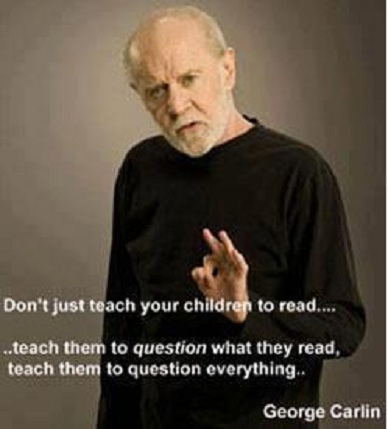