Some cultures burn their dead, others carry corpses up the nearest mountain. Some make mummies, some hold burials at sea and, once in a while, some shoot their journalists out of cannons. Today, a little less than half of Americans are choosing the traditional route of being buried in the ground (according to the National Funeral Directors Association), and an increasing number are opting for cremation. What a relatively small percentage of Americans realize, however, is that both options leave behind a lot more than the fond memories of loved ones. In fact, human beings are full of toxins, and no matter what your religious beliefs, they will not be following us into the next world. They're here to stay.

Your Body Is a (Toxic) Wonderland

Despite the promises of diet gurus like Alejandro Junger, detoxifying the human body is not as simple as cutting caffeine and peanuts. Every day your body is exposed to contaminants in the environment (mercury from the fillings in your teeth, pesticides from the food you eat, flame retardants from the furniture in your home and BPA from just about everywhere) that even the most stalwart of kidneys cannot eliminate. Our planet is so saturated with contaminants that we're exposed to them even before we're born. In a study led by the Environmental Working Group, an average of 200 industrial and chemical pollutants were detected in the umbilical cords of babies born in U.S. hospitals.

The pernicious and prevalent nature of these toxins cannot be overstated, and they infect the ground wherever humans are buried. That's in addition to the formaldehyde and other chemicals that are pumped into a corpse prior to burial. A known carcinogen, formaldehyde builds up in the grounds of cemeteries and can leach through the soil and into the water table. Older cemeteries are brimming with arsenic, which was used as a preservative in the pre- and post-Civil War era. You might think cremation is the more ecological way to go, but studies have shown that crematories emit significant levels of environmental pollutants, including mercury.

For the eco-minded, this is a bitter pill to swallow. Realizing that you're fated to leave behind a personal puddle of toxic waste, no matter how passionately you've reduced, reused and recycled in life, is almost as depressing as realizing you're going to die.

But there is a cleaner, and weirder, way to go. 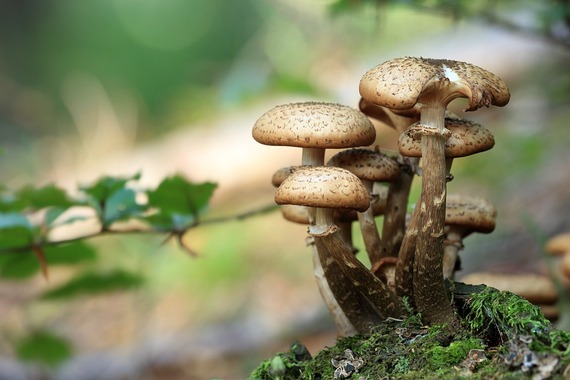 You Could Buy Yourself a Mushroom Suit

Mushrooms, Kenneth Miller writes, are "Earth's great decomposers." They break down organic and inorganic material alike and help turn it into soil. They are resilient and versatile, providing food, medicine and the occasional psychedelic experience. They may even be the key to cleaning toxic oil spills. Mycologist Paul Stamets has been doing promising research in this field, and his fungi have shown an astonishing talent for slurping up petroleum.

It is the mushroom's versatility that inspired artist Jae Rhim Lee to create the "Infinity Mushroom," a fungus bred specifically to munch on human tissue. Using her own nail clippings, skin, blood and various excretions, Lee has "trained" the mushroom to recognize and consume her cells with the aim of remediating the industrial toxins stored in her body (after she expires, of course). This in turn has led to the creation of what the artist calls the "mushroom death suit," a handcrafted garment infused with Infinity Mushroom spores.

And yes, she knows that sounds creepy.

"I realize this is not the kind of relationship we usually aspire to have with our food," Lee said in her 2011 TED Talk. "We want to eat--not be eaten--by our food, right? But as I watch the mushrooms grow and digest my body, I imagine the Infinity Mushroom as a symbol of a new way of thinking about death, and the relationship between my body and the environment."

Lee's company, Coeio, now offers Infinity Burial products as a sustainable alternative to traditional burial and cremation (both for people and for pets). After being buried in this fungal shroud, a corpse will be "transformed into vital nutrients that enrich the earth and foster new life."

Dennis White, a 63-year-old suffering from a rare neurological disease, will become the first person to be buried in the mushroom suit. His story and his family's challenges in fulfilling that wish are depicted in the documentary "Suiting Dennis."

The Infinity Mushroom Suit will become commercially available in spring 2016.

So How Do You Want to Die?

They say the only thing that's certain in this life is death and taxes. We can wrap that up nicely under the physics umbrella and say that it's all a matter of entropy. Things fall apart, and energy escapes into the universe. In the long run, death and money are just aspects of that infinite process.

But while we're on Earth, and sharing its space with the living and the dead, the friendliest thing to do is minimize our negative impact and plant seeds where we can. Some may consider it extreme to take the "reduce, reuse, recycle" mantra to the grave, but perhaps greener funerals are our civic destiny. How's that old chestnut go? "Good fungi make good neighbors," or something like that.

Like it or not, death is a business (it would be a trifle awkward and very unhealthy if we let our nearest and dearest fall and rot where they may). That your death is coming is incontrovertible, but how you handle that death can be up to you. There are a number of routes to the great beyond: burial, cremation, cement stockings. Given the options, and what you'll leave behind, devoured by mushrooms might be the most sensible way to go.