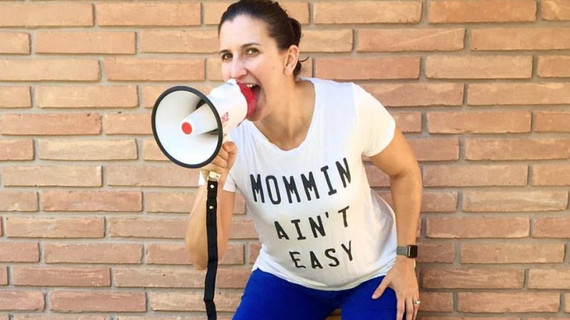 As a frequent social media user, I am obsessed with Timehop. It pulls up your history each day and shows you what you were doing on the exact date a year ago, two years ago--as far back as your posts go.

Recently, photos popped up from a work trip I took to the Albuquerque International Balloon Fiesta. At the time, I worked in PR for an animation studio; I was there to help manage an interview on board a hot air balloon with the Disney Channel Movie Surfers to promote an upcoming film. I scrolled through the photos from the comfort of my bed as our three kids were clamoring for me to get up, make breakfast and get them ready for school. How different my world had become.

My job at the studio was my dream gig, and I had worked very hard to get it. It took over a year of networking and persistence to land an interview. Once I had the job, the work itself was challenging, fast-paced and demanding. Being a part of that studio community became a huge part of my personal identity.

Making the decision to move nearly 2,000 miles away to Houston, Texas was not easy by any means. But I had another calling tugging at me. My husband and I were struggling with infertility, and with each passing month I became increasingly aware of how deeply I wanted to be a mother. No one on my team had small children, and we had no family nearby. I was having a hard time wrapping my head around how I could juggle the demands of work and motherhood. So, when an opportunity came up to advance my husband's career and live in the same city as my parents and sister, we jumped at it, right in the middle of an IVF cycle. I looked around for jobs in Houston, but I was picky. I was also hoping to be pregnant soon, and had hopes that moving to a lower cost city meant I could stay home for a bit. By the time we actually got on a plane to Texas, I was six weeks pregnant with our first child.

Fast forward nearly eight years, and I haven't set foot in a traditional office again. While I have no regrets about what we left behind, and I feel so grateful that we can maintain our lifestyle on a single-family income, I still struggle with my work identity. Who am I without a job title? It is almost as if once you make the choice to be home, much of the world assumes you have no other skills other than that of homemaker. I remember watching an episode of 30 Rock when Kenneth quipped, "I feel about as useless as a mom's college degree!" Ouch.

And I know it's not just me. I was having breakfast with a friend a few weeks ago and she was lamenting that she could not attend another business dinner with her husband where no one asked her a single personal question. She is a writer and an actress, but it is often assumed that she does not work outside of the home. They don't ask her what occupies her time outside of kids' schedules. Listening to her felt like someone turned the light around on me. I, too, rarely get asked where or what I work on other than my children.

Sure, it may be hard for someone to assume you have a "real job" when you are at a park at 10am on a Tuesday. But I (and many of us) down play my contributions. I have maintained freelance PR projects and have been writing for the last year, but calling myself a "writer" still feels like I am playing dress up. Much of my PR work has been pro-bono for non-profits and the word "publicist" doesn't feel right either.

I see women everywhere doing this. I overheard a mom being congratulated for successfully running her kid's huge, week-long school fundraiser saying, "Thank you, but I don't work. Not like you do!" This woman is practically a professional event planner with all of the large scale school events she has organized, but she does not see herself that way. Much of the value we assign to our efforts relates to if it comes with a paycheck or not.

What does it mean to be in this in between space? I am mostly home, working sometimes, but not enough to call it a part-time job. I'm busy with deadlines and responsibilities and making some money. But how does that translate to the "occupation" line on forms?

This is hardest to articulate to our kids. My seven-year-old can't differentiate between me writing a press release and me checking Facebook. From her point of view, I am just on my laptop. Daddy leaves to go to work. Mommy does not. Once, we walked into Costco while the credits of one of the films I worked on were rolling on a huge TV. I made the kids sit there until I could point out my name to them on the screen. Our astute child then asked me if I also worked on one of the new animated films that was coming out in a few weeks. I told her no, to which her response was, "Is that because you had us?"

The straight answer is, yes, but not in the way she thinks. The biggest lie of growing up is that you someday figure out what you want to be. It is a moving target that you never reach, and what you want changes over time. I do know that the moment I became a stay-at-home-mother, all of my past achievements weren't somehow erased. I also didn't stop having aspirations, goals or drive in a more typical "career" sense. The seeking never stops.

We have this mentality that we are what we do. If what we do most of the day is parenting, then it is easier for us to dismiss the rest and tell ourselves "I'm just a mom." When I stop and think about it, many of my "mostly mom" friends have side projects. They teach piano lessons, have photography businesses, wrote a book, maintain a blog, have Etsy shops, etc. They hold spots on PTO boards and run local mom groups. I would hesitate to say that any of them would actually label themselves as teachers, writers, board members or small business owners.

Those of us living in this middle ground may have left traditional work behind, but we shouldn't minimize the contributions we are making. Even if your side hustle doesn't add monetarily to your family's bottom-line, it doesn't mean it's without value. Sometimes I'll catch myself sulking, thinking about how I'm not providing a good enough role model for our children on how to pursue dreams. Then, one of them will ask me if I am going to write about our trip to the zoo "for the Internet." They see me in ways I don't always see myself.

So for my part, I am going to start asking more moms what they do, and I am not going to take "I am with the kids" as a complete answer. I know there is almost always much, much more to it.

This piece was originally published by Amanda Sorena on Mommy Nearest. Amanda Sorena is a freelancer writer and Public Relations Specialist who lives in Houston, Texas with her husband and three children. You can follow her on Twitter and Instagram at @KismetSorena.

More:
MomsKidsMotherhoodParenting Working Moms
Newsletter Sign Up
Raise the kind of person you'd like to know
Subscribe to our parenting newsletter.
Successfully Subscribed!
Realness delivered to your inbox