Over the last half century, a field of academic study called network science has turned traditional relationship building on its head. Surprisingly, research shows that being the most connected person is not an effective way to build your network. The single best strategy is one that almost no one talks about.

My 6'5" dad was black and grew up in one of the most dangerous cities in America. He sported a huge afro into the early 90s when he died at the age of 33; one year older than I am now.

My mother, a white, Jewish refugee from Poland, arrived in Brooklyn when she was 17 with no money and no English. She essentially raised me as a single mother.

That makes me a half-black, half-white, 6'5" guy born into a half-Christian half-Jewish family.

Growing up in the almost entirely white, middle-class suburb of Hopewell, NJ, made me feel like an outsider on some level.

I felt most alone when I was surrounded by people. These moments made me realize how different I was.

Based on some of the most reliable and groundbreaking research in network science, this background may not have been a hindrance like I thought it was.

It may have actually been the perfect upbringing to be a connector.

Being The Most Connected Is A Vanity Metric

One of the leading applied network scientists, Rob Cross, an associate professor at the University of Virginia McIntire School of Commerce, offers a critical development in understanding networks:

"Traditionally, self-help books on networks focus on going out and building big mammoth rolodexes...What we've found is that this isn't what high-performers do. What seems to distinguish the top 20% of performers across a wide-range of organizations is not so much a big network. In fact, there is usually a negative statistically significant likelihood of being a top performer and knowing a lot of people." (via Youtube)

If being the most connected person isn't the best strategy or even an effective strategy, what is?

Ron Burt is the Hobart W. Williams Professor Professor of Sociology and Strategy at the University of Chicago Booth School of Business. He is the leading academic researcher in the world studying the ways that social networks create competitive advantage in careers, organizations and markets.

Burt's research gives insight into a strategy that has become one of the most reliable and replicated findings in network science over the last 30 years.

However, before we understand the strategy, we need to have a better understanding of network science.

Principle #1: Your Network is a Set of Clusters; Not One Big One

A basic pattern of network science is clustering. People tend to gravitate to clusters for a lot of reasons whether it be working in the same company or industry, living in a neighborhood, or going to the same school. These clusters get stronger as people gain mutual friendships, establish norms and build reputations.

This clustering tendency has two consequences:

One large example that we can all relate to is the gap between those just entering the workforce and those in their 50s and 60s. For many adults, the abbreviated words of 20-somethings are impossible to decipher. On the other hand, 20-somethings do not fully appreciate the unwritten codes of how business is really done.

Within groups, we get mastery. We build reputation. People like us. We become more efficient coordinating with others. We form our identity within a group.

A key insight from network science is the power of brokering, the act of moving information from one group to another. Burt explains, "What a broker does is make a sticky information market more fluid. Great ideas will never move if we wait for them to be spoken in the same language."

Combined these three advantages give an individual an overall vision advantage to see, create, and take advantage of opportunities.

In a groundbreaking, widely replicated study of 8 different populations, Burt showed that simply being in an open network instead of a closed one is an extremely good predictor of career success. In an open network, everyone doesn't already know each other. As a result, you are in between many different clusters. In a closed network, everyone already knows each other. 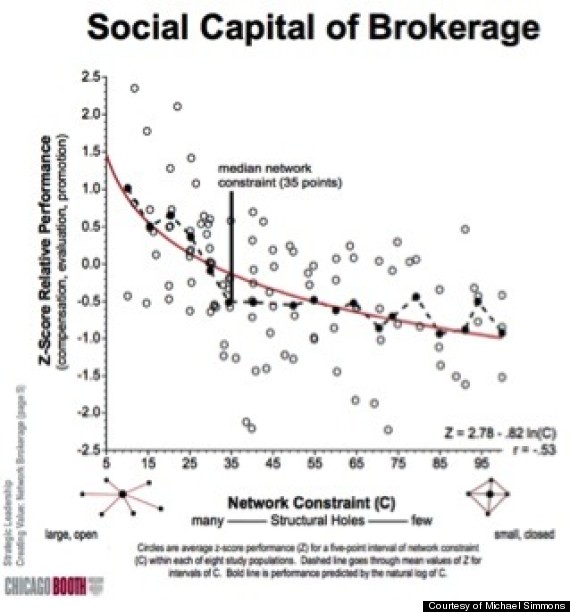 The study shows that half of the predicted differences in career success within a line of work (i.e., -- promotion, compensation, industry recognition) can be explained by the extent to which a person is a network broker (i.e. connecting different clusters). No other factor was more important in predicting career success!

Brokerage helps give context to why introductions and convening are so powerful. It also shines a light on an often underappreciated part of introductions -- translation. While it may be obvious to the broker how two people in different clusters should connect, it may not be obvious to the two people. Therefore, it is worth devoting extra attention to helping helping others see the same opportunity you see.

Principle #3: Brokerage Is More Than A Tactic. It Is A Way Of Life

Brokerage is more than just a tactic to be deployed. It requires a completely different way of seeing and being in the world that is often uncomfortable.

Being deeply connected and respected while having a high status in a single network feels good.

On the other hand, being a broker means pulling from diverse perspectives that may seem conflicting. This requires intellectual flexibility. It means often being an outsider. It means less stability.

Ideas that are obviously beneficial to you because of your unique place in your network might seem trivial and risky to someone deeply inside a network.By becoming a person who can become comfortable in this environment, you become someone who can more easily leverage brokering.

In order to be an effective broker, you must continually fight against the comfort and validation that comes from staying in one group.

Kathy Calvin, President and CEO of the United Nations Foundation, has built her career on being what she calls a "trisector athlete." Pulling from her diverse experience in the government, for-profit, and nonprofit sectors, she has brokered global partnerships to help solve some of the world's largest challenges.

Kathy has developed a 15-minute meeting policy where she takes meetings with people she wouldn't normally connect with. This exposes her to new networks while still maintaining her fast-paced schedule.

This policy has been extremely beneficial. One example is a 2005 meeting with Elizabeth Gore who was in her late twenties and had just returned from spending two years in a remote village in Bolivia with the Peace Corps. The meeting was in November. By March of the next year, Elizabeth joined the UN Foundation in a newly co-created position. Elizabeth went on to create the Foundation's largest campaigns, Nothing But Nets, Shot@Life and Girl Up. Today, Elizabeth is the first-ever Resident Entrepreneur leading their work on innovation and entrepreneurship.

How To Participate In The Network Science Renaissance

We are in a renaissance period for network science. It is only in the past few years that billions of people have connected to each other via global networks (i.e. -- Facebook, Linkedin, Twitter, & Google) and started to publicly share in trillions of ways.

What we now know is that the simple act of constantly putting yourself in an open network, a network where people aren't connected to each other, will give you a huge advantage in your career. It will give you a vision advantage that allows you creatively capitalize on new amazing opportunities. More importantly, it will expose you to the conditions you need in order to build the skill-set and mindset of a network broker.

Growing up "uncomfortable" gave me the freedom to create an identity that wasn't based completely on belonging to one group. This made it easier for me to go against the grain and make two of the most important decisions in my career -- starting a business at 16 when no one else I knew was an entrepreneur and taking a semester off from college to write a book against the strong pushback from people closest to me.

Each of these decisions required tremendous leaps of faith that my unique upbringing ultimately made it easier to make.

Throughout my career, I've continued to surround myself in new groups.

Today, Empact, the organization I co-founded, helps connect the country's top young entrepreneurs to new groups they normally wouldn't connect with including the US Chamber of Commerce, United Nations Foundation, and the White House. We translate the objectives of each group in order to create platforms that help entrepreneurs give back.