A troika of the Hillary Clinton campaign, the Democratic National Committee, and their echo chamber in the major media are laboring to assure everyone that the Democratic nomination process is over. 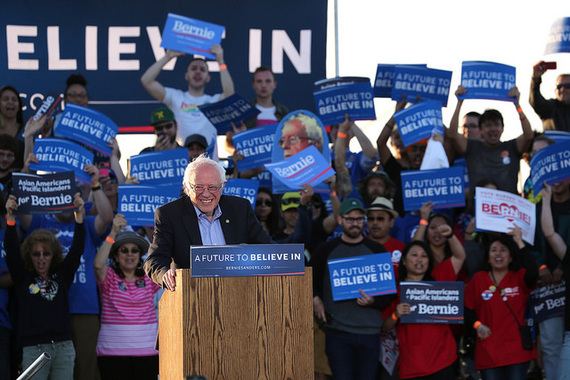 They've failed to convince the people who actually vote and see Bernie Sanders wins in Indiana, West Virginia, Oregon, and a virtual tie in Kentucky. Here's 10 reasons why Bernie can still win, is the strongest candidate for November, and is helping build something the nation desperately needs.

1.Sanders, the best bet to beat Trump - just wait until the debate.

The latest average of polls give Clinton an edge of less than 2 points over Trump, Sanders an edge five times greater. While narrowing Clinton's margin, Trump has yet to make a dent on Sanders' lead - the NBC/Wall Street Journal poll May 22 has Clinton plus 3 on Trump, Sanders plus 15.

And the much anticipated #BernieTrumpDebate will likely push those margins through the roof.

2.Yes, you can believe these polls.

It's not a mirage; it's been a fact for months and is reinforced every time new polls are released.

The Clinton and media narrative is that Sanders polls better against Trump than Clinton because he hasn't been subject to attacks. Really? That's what the major media, especially in the New York to Washington DC corridor, have done for months. 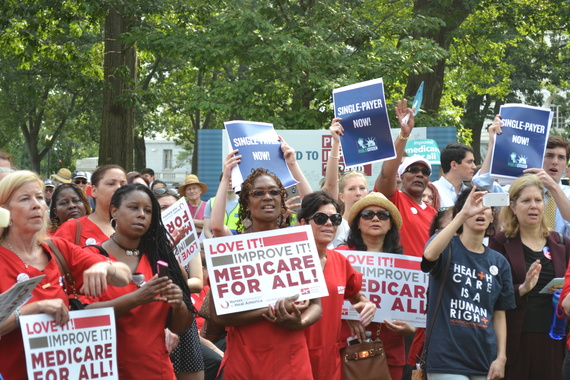 Oceans of ink have been devoted to publicizing one-sided "studies" vilifying Sanders' proposals on Medicare for all and free tuition at public colleges, and to attacking Sanders political philosophy, record in Congress, and ability to pass his program, all while veering between trying to marginalize Sanders or mock him.

Additionally, the Clinton Super Pac, headed by David Brock, notorious for his demonization of Anita Hill, has planted unfavorable stories on Sanders in the media and hired trolls to malign Sanders and Sanders supporters on social media platforms.

None of that has caused Sanders standing against Trump to fall (especially compared to how Trump has steadily gained on Clinton).

3.Yes, you can believe those polls, part 2

If not lack of attacks, what else explains the difference?

First, Bernie's base - the overwhelming support of independent voters, and mass enthusiasm of young voters.

Clinton built her margin among traditional Democratic voters, but continues to lag among many working class independents likely to be hotly contested in November. Sanders, as he has shown throughout the primary season, is much more likely to hold those voters than Clinton. 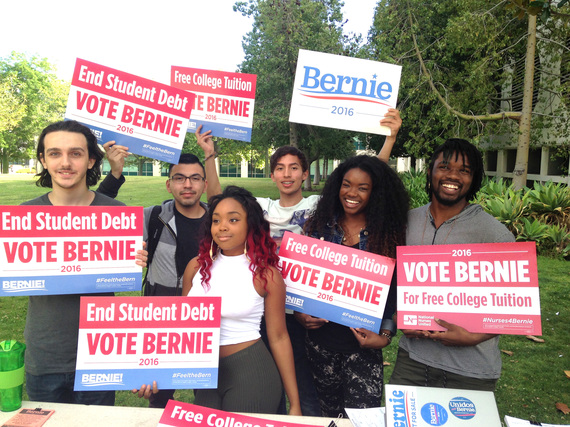 Further, it's unknown if the hundreds of thousands of young voters enthused by the Sanders campaign will turn out in November for another candidate.

4.Lots of votes still to be counted

More than 7.7 million Democrats in California alone, and several million more independents, are eligible to vote in the California Democratic primary June 7. Voter registration, especially among young Democrats inspired by Sanders candidacy, has exploded this year. On the final day of registration May 23, despite the media drumbeat that their votes don't matter, nearly 200,000 Californians registered to vote in the primary. 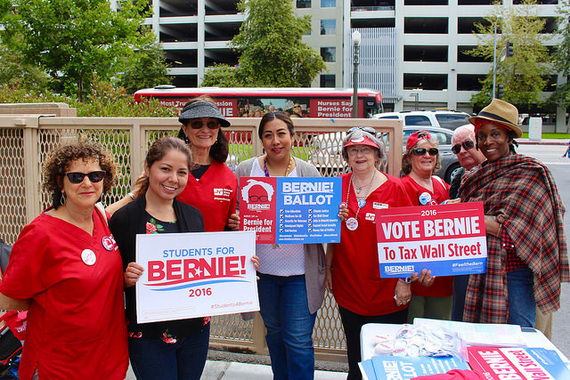 Voters in the District of Columbia, Montana, New Jersey, New Mexico, North Dakota, Puerto Rico, South Dakota, and the Virgin Islands are also yet to be heard from. That's 781 pledged delegates still to be won, nearly three times the current difference between Clinton and Sanders.

It remains highly unlikely that either candidate will reach the magic number of bound delegates by the end of the primary season. Clinton would need to win 79 percent of the remaining pledged delegates to clinch prior to the convention. That will not happen.

Sports teams with momentum typically are the ones who win championships. It's true in politics as well. Coming into the outstanding election calendar, Sanders has won 12 of the past 20 contests, with a 13th, Kentucky, effectively a tie. He is also likely to win a majority of the remaining votes. The image of a wounded candidate staggering into a party convention or the general election is not reassuring.

6.Super delegates will decide the nomination

The 719 unpledged super delegates will end up deciding the nomination - as occurred in 2008 when neither Barack Obama nor Clinton had enough pledged delegates alone to win.

As Sanders has noted, Clinton lined up support from hundreds of super delegates long before the primary season began. But on the convention floor, super delegates can vote for who ever they like. And, if the Democrats want to stop Trump, they should opt for the candidate who most consistently beats him in every poll, Bernie Sanders.

7.The most trusted candidate

Trump and Clinton, both viewed unfavorably by 57 percent of voters in a recent ABC/Washington Post poll, are rapidly lowering one bar. Or as the Post put it, "never in the history of the Post-ABC poll have the two major party nominees been viewed as harshly as Clinton and Trump."

There is an alternative. Throughout the primary season, Sanders has maintained favorable ratings, and in virtually every exit poll, even in states Clinton won, Sanders rated far ahead of her in trust and honesty.

Lack of trust in our political leaders is a significant reason why Congress is viewed with such disdain and why so many Americans have become disenchanted with the U.S. political system, ultimately comprising a genuine threat to democracy, another reason why super delegates concerned about restoring faith in the system would be well served by supporting Sanders.

8.A public yearning for real change

As has been evident for months, voters across the political spectrum are in revolt, which as much as anything else explains why Trump is the last one standing on the GOP side.

Sanders has reached a core of the disaffected who are drawn to his vision for real change, and those fed up with what he aptly calls a rigged economy and campaign finance system and the grotesque inequality that has seen the bulk of wealth and income transferred to the top 1 percent.

That support emerges from his consistent opposition to job-killing trade pacts, as well as the most comprehensive solutions for access to education and ending student debt, the climate crisis, job creation, reigning in Wall Street, criminal justice and immigration reform, and, guaranteed healthcare through Medicare for all. 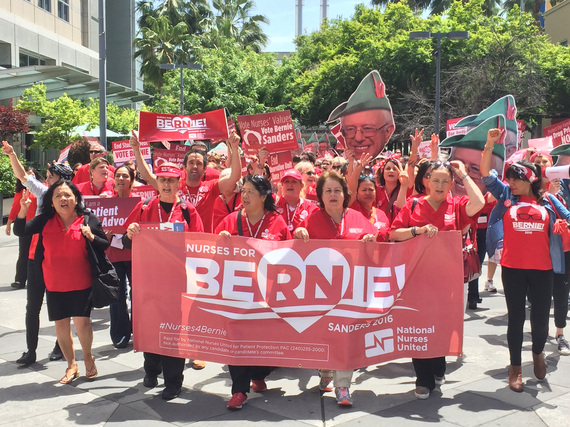 One sign of the resonance of those issues across the political spectrum is the recent Gallup poll showing 58 percent of all Americans now favor the Medicare for all system proposed by Sanders which nurses have proposed for many years.

9.Who will really unite the Democratic Party?

The DNC hierarchy and some in the media have been quick to dismiss the hundreds of thousands of people who have packed the Sanders rallies from coast to coast. Think about that. Tens of thousands of people turning out, not for a Beyonce or Springsteen concert or the Super Bowl, but to listen to a one-hour speech by a 74-year-old politician who was largely unknown a year ago.

All those "you's" form the core of a grassroots mobilization that is necessary to win in November. Obama's campaign, and the vision of hope and change it inspired, generated the tens of thousands of volunteers that were critical to electing him. Sanders is the only Democratic candidate who has inspired a similar base of activists.

10.It's about the future

Or as Sanders also explained, the enthusiasm "should be a message to the Democratic Party" that the vision and hope being inspired today, especially among young people, "is the future of America."

Political views and preferences formed at historic ruptures can affix political allegiances for decades. Following the Civil War, the anti-slavery Republican Party controlled the White House for half a century. Similarly, the New Deal coalition - the Democratic Party alliance with working class America born during the Great Depression - dominated U.S. politics for decades. 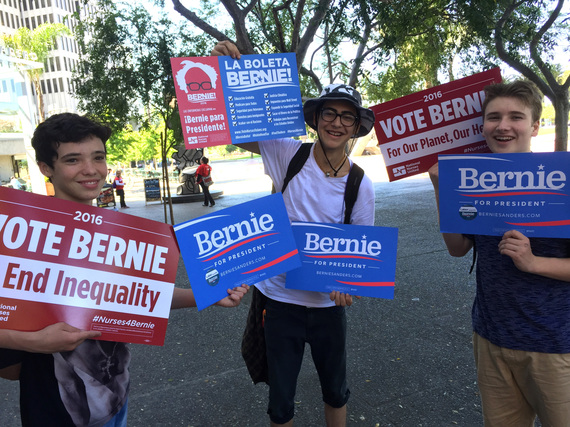 If the Democratic Party today aligns itself, especially with young voters, for a clear vision that rejects the neo-liberal policies that have ruled both major parties since the 1970s, and embraces an agenda for transforming the nation they can ride the wave of change. Or be left behind.