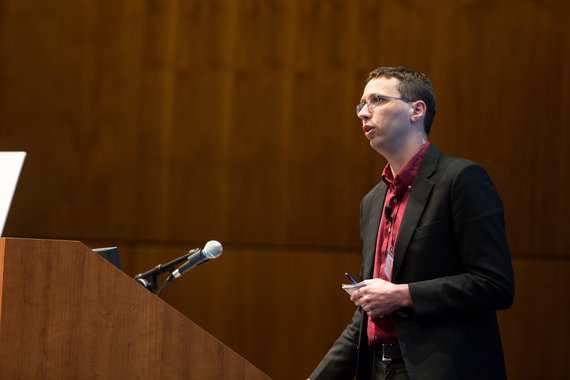 I was honored to serve as a keynote speaker at the Global Health Midwest Conference this past weekend held at Creighton University School of Medicine in Omaha, Nebraska. The conference certainly lived up to its theme of "Bridging borders at home and abroad." It included students in high school, undergraduates, medical and nursing students, and professionals from fields in public health and medicine and advocacy and various ministries. The diversity of participants and of viewpoints, and the deep commitment to service and discernment reflected the spiritual values of the Jesuit tradition, a tradition I came to better appreciate over the last two days. The conference further solidified in me that the global health enterprise must be truly global, sharing, exploring and collaborating for innovation, best practices, and policy change for a healthier and more just world.

The students I met gave me great hope for the future of health and social justice. One moment at the conference highlighted its brilliance: during the research poster session, I engaged in a dialogue around the science and economics of a glaucoma screening program in Guatemala with Diana Andino, a second-year medical student from Loyola University School of Medicine. I was highly impressed by her intellect, and sharp understanding of both glaucoma pathophysiology, diagnostics, and treatment and the political economy of health and disease in Guatemala. She is exactly the kind of physician our country needs--brilliant, committed, compassionate, thoughtful.

As the conversation progressed, I learned that she is an undocumented immigrant who Loyola has supported under a visionary initiative. These immigrants, per President Obama's vitally important Deferred Action for Childhood Arrivals executive order, would not be deported. Loyola is a pioneering medical school who matriculated 14 of the nation's first 20 undocumented immigrants as medical students in 2015. It was shocking to learn that this remarkable medical student and her family had been under threat of persecution and deportation much of her life. It is tragic that opportunistic politicians exploit the very real economic challenges of working class Americans to waste tax dollars targeting and deporting hard-working immigrants and their families. Rather than posing a threat, undocumented immigrants have helped grow the economy for all Americans. In Diana's case, she is a tremendous talent who will contribute deeply to health and social justice in America and beyond. Yet not many medical conferences have the vision or courage to have an undocumented immigrant present a research poster.

Talking with Diana was like putting a mirror to the depth of my own psyche as a white American male physician. The remarkable Dr. Renaisa Anthony, on faculty at the University of Nebraska Medical Center, in her keynote, similarly shone a light on the deep truths of global and national inequities. Speaking as a black woman from Detroit, with roots in Flint, she spoke directly about race and structural racism in a manner typically absent in academic medicine.

Indeed, race and racism is inescapable in American life. I think about the everyday occurrence of passing by a police officer on the road. As a white, American-passport-holding, middle-class male physician, my pulse is rock steady. My cardiovascular system doesn't skip a beat. Seeing a cop gives me a sense of security. That is simply not the case for many Americans, particularly women, people of color, and people from poorer communities.

Physiology is experience. It helps explain why it is so difficult for middle class white American males like myself to "get" the Black Lives Matter movement. I cringe at white folks who talk platonically about "all lives matter" and that the black lives matter movement is somehow rude at best or criminal at worst. The deep historical naivety that that response suggests is rooted in present-day lived experience of people, like myself, who enjoy the privileges of race or class or social status. As an epidemiologist, I can understand the statistics: an incarceration rate of over 700 per 100,000, how with 4% of the world's population, we have 22% of its prisoners. I can understand the disproportionate allocation of resources, where we spend far too much of our tax dollars on militarizing the police rather than on education. I can understand the basic fact that, in this country, a black man has an over 30% lifetime prevalence rate of incarceration.

But that lived experience, that translation of statistical probabilities into individual physiologies, that experience of fear, is not something I can or will have. My experience of America is true to its legend: a free country. Deep in my core, America-as-free is my lived experience. America truly and remarkably serves me well. That is not the experience of so many of my fellow Americans. America has not yet lived up to its fullest promise of liberty and justice for all.

This is not an indictment of individual cops or even of the concept of government. I believe in public safety as a fundamental role of government, and a fundamental right of citizens. I believe in the nobility of the profession of policing and public safety. It is a realization and a reckoning of our country and our history, a country built off the backs of slaves originally and low-wage and exploited workers subsequently. Black lives matter and other social justice activists are fighting a now some 400-year-old legal and cultural system that was originally built around the institutions of slavery and exploitation that created with it a complex set of laws and practices that continue to morph, from Jim Crow to the War on Drugs, yet simply refuse to disappear. To design better social policies, to fix the professional and institutional failings that lead to the targeted violence of the State against people of color, we have to relentlessly confront this uncomfortable truth.

What does this have to do with global health? Firstly, as Americans, we have to understand our deeply flawed social institutions, we need to dissect them, understand our own flaws, so we can share those lessons with others. To help others, we need to know ourselves. To know ourselves we have to critically understand our uncomfortable roots, our unjust histories. We have to discern, through the whispers and fog of the past, our own ancestors--and our ancestors' neighbors whom they fought and oppressed. Global health practice for us Americans then becomes more of being a humble messenger of struggle and failures rather than a benevolent provider of truth, innovation, and justice.

Our goals must not be to export American values, American systems, American technology, American healthcare. That is not the aim, that must not be the aim. The aim is to become part of an interconnected community of providers of innovation and best practices, to become nodes in a complex, non-linear adaptive system. This system is built on learning, acknowledgement of and reflection upon failure, and a focus on data and evidence to drive forward continuous improvements.

I can contribute these best practices from the unique lenses of my American values and experiences. I have been deeply privileged to be trained in science, management, and medicine in America. Furthermore, there is a deep thread in American social thought around constructs of social justice, from abolitionists to suffragettes, to peace activists to labor advocates--to Diana Andino, the second-year medical student on a path to becoming a brilliant, thoughtful doctor. Those thinkers inspire us. They provide a spiritual foundation from which I can better listen and engage with those courageous advocates and clinicians and policymakers around the world who are part of the global movement, from Omaha to rural Guatemala to Capetown to Kathmandu, on a more rational, just, and compassionate approach to global public health and healthcare. So that we may, in the words of the Jesuit's founder Ignatius of Loyola, "go, set the world afire" and tear down structures of oppression and injustice.

Duncan Maru is the Co-Founder and Chief Strategy Officer at Possible, a nonprofit healthcare company that delivers high-quality, low-cost healthcare to the world's poor.