On any given day of the week you can see Superman, Spiderman and Johnny Depp's famously muddled pirate--or at least costumed actors playing them--congregating outside Grauman's Chinese Theatre in Hollywood. Recently a pair of arrivistes joined the usual suspects, vying for attention among the camera-wielding day-trippers and creating enough of a scene to leave the established set green with envy. The new kids on the block were imitation Na'vi, the blue-skinned humanoids from the cinematic blockbuster, Avatar. Unlike their film counterparts, the actors wore low-tech costumes whipped up on an old sewing machine, while their azure makeup recalled the Smurfs. Still, the message is clear: Blue is the color of the moment.

In the terrestrial world, signs of blue life have been flowing onto the runways and pages of glossy magazines. At the recent fall shows, designers from Proenza Schouler in New York to Pucci in Milan, have explored myriad shades of cobalt, cornflower, turquoise and cerulean. It's almost as if Miranda Priestley's spirited defense of fashion in The Devil Wears Prada, a reaction to her indifferent assistant's "lumpy blue sweater," is being played out in real life. In her new "Marrakesh" collection for Tiffany, Paloma Picasso blends geometric gold patterns and lapis lazuli--the color of which recalls the walls of Morocco's Majorelle Garden, where Yves Saint Laurent's ashes are scattered. Meanwhile, the style bibles are teeming with all manner of blue foo dogs, turquoise jewels and lapis collectibles. 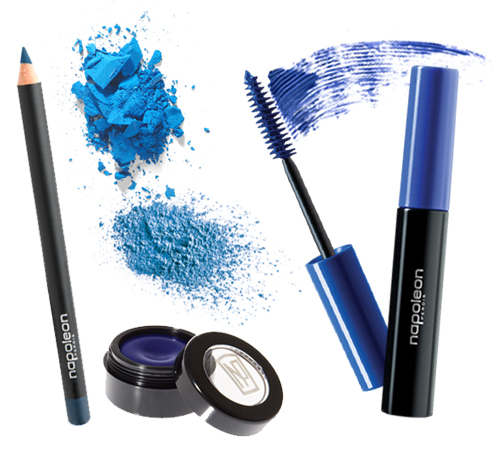 Makeup, too, is turning blue in the face. After seasons of bronze, green and purple peepers, many makeup artists are exploring a blue period. Unlike the pale hues of the 80s, the new take on blue eye shadow is decidedly vibrant and vivacious. A recent edition of T Magazine in the New York Times featured two covers of the actress Julianne Moore: one au nauturel and one with theatrical blue eye shadow. At the couture shows in January, artists at Guerlain showcased midnight blue eyes, while a sportier take on the color turned up at Derek Lam's show in New York. For the WALTER show in New York, as a counter to the mostly monochromatic clothes, I also elected to use a blend of iridescent blue shadows on eyes.

In real life, many women shy away from the hue, perhaps concerned that they'll end up looking like Rebecca Romijn in the X-Men movies. But with a few tricks and the right products, anyone can sing the blues--and do it convincingly. Always wished you had blue eyes? In a way, you can, with a few strokes of intensely pigmented powder, or perhaps a blue liner and blue mascara. Even Pantone has declared turquoise the color of 2010. "Turquoise evokes thoughts of soothing, tropical waters and a languorous, effective escape from the everyday troubles of the world," the color authority said. This world and the Avatar world.

Here are some guidelines on wearing blue, from minimalist to maximalist:

Subtle: The easiest way to embrace the trend is to add a blue mascara to your repertoire: Wear it over your black mascara for subtle effects or solo for more vivid results. Blue makes the whites of your eyes stand out, which is an added bonus after a late night. Team a blue mascara like my Lash Patrol Ultra Marine with a nude shadow applied from lash line to brow bone. Add highlights of white sparkle dust to the inner corner of the eye and brow bone for a touch of glamour.

Medium: Play up the eyes with a combination of blue liner and two shadows. Start with a sweep of matte taupe shadow through the socket of the eye for natural definition. Line the upper and lower lash line with a rich blue like my China Doll Eyeliner in Heaven and soften with a small eye shadow brush. To enhance your liner look, blend out the edges with a matte blue shadow (like my Color Disc #16), and line the inner rim of the eyes with a white pencil. Finish the look with black mascara and groomed brows. 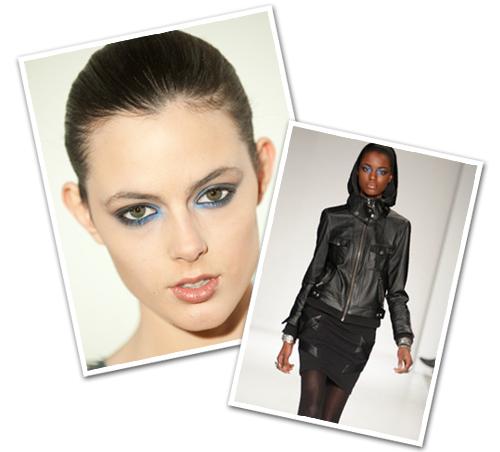 Bold: At the WALTER show, I started with a base of black eye shadow on the upper and lower lashes lines and then applied the electric blue shade from my Dramatic Eye Shadow Quad over the top. Extend the color to the mobile lid and the socket. Line the inner rim of the eye with a black gel liner. Add an accent of electric blue to the inner corner of the eye and my Loose Dust #8 Blue Velvet onto the lid. Start at the inner corner of the eye and fade out into the black. Finish with lashings of mascara.

Out-there: For a more eccentric look, blend different shades of blue on the eyes. Work a blue pencil onto the entire eye lid and lower lash line and blend with a firm brush. Using the same pencil, line the inner rim of the eyes. Set the pencil with my Prismatic Eye Shadow Quad #10: Use the light blue on the eye lid and the navy on the lower lash line. Sweep a complementary shadow through the socket--like peach, apricot or terracotta--to make the eyes pop. Finish the look with black mascara on the upper lash line and blue mascara on the lower lash line.