For most Americans, C-SPAN is like a smoke detector. We know it's there but we rarely watch it, taking for granted the fact that we have a (mostly) subjective broadcast of the goings-on in the highest halls of our government. We notice C-SPAN only on days like today, when the alarm goes off.

Responding to the failure of the Senate this week to move forward on any of four proposed pieces of legislation around gun ownership, civil rights leader and Georgia Congressmember John Lewis led a sit-in on the floor of the House with fellow Democrats. As House Minority Whip Steny Hoyer (D-MD) addressed the House about the effects of gun violence on America, presiding officer Representative Ted Poe (R-TX) put the House into an early recess. House Speaker Paul Ryan's office has said that the House will not be called back into session until Congress members operate "within the rules of the institution."

C-SPAN cameras do not run while Congress is in recess, but in the meantime, the network decided to broadcast the live Periscope feed of Representative Scott Peters (D-CA), noting that they do not control their own cameras: 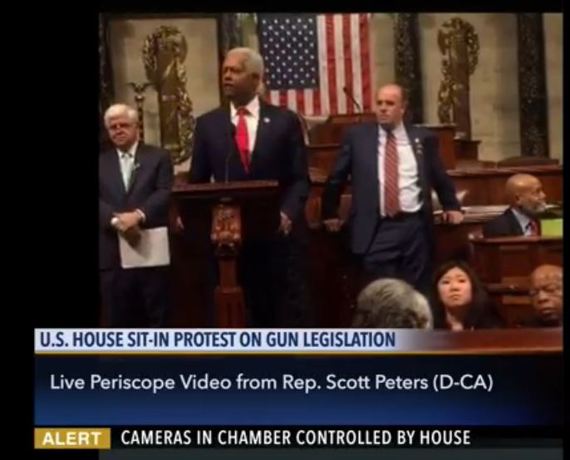 Around 3:30pm EST, C-SPAN Communications Director Howard Mortman tweeted that C-SPAN had switched over to Facebook Live to stream the sit in: 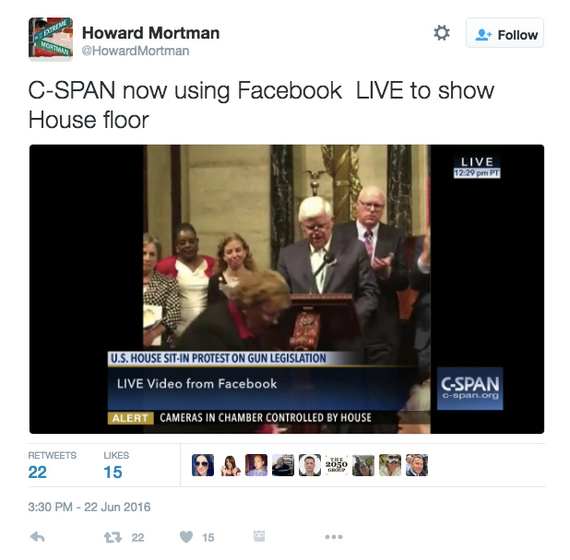 So there we have it: The lights in the workhouse were turned back on by the same media which, we coincidentally learned today, we usually use to avoid work in the first place. For the few hours between when the House went into recess and C-SPAN went live to Congressman Peters' personal video feed, everything we knew of what was happening in the House came from the highly objective Twitter feeds of House members themselves. We couldn't see for ourselves, because - it would seem -Speaker Ryan thought it was too dangerous.

Whether Speaker Ryan turned C-SPAN off to punish Democrats for violating some procedural rule or whether it was because he objected to the sit-in itself (having received $36,800 in campaign contributions from the National Rifle Association), Speaker Ryan committed an act of censorship. He decided that rather than let Americans watch C-SPAN and come to their own conclusions about the actions of the Democrats, he would simply remove our point of information. (To be fair, Democrats have done the same thing, as in July 2008 when then-Speaker Nancy Pelosi [D-CA] put the House into a scheduled summer recess before allowing a vote on offshore drilling. Republicans remained in the House talking about gas prices, in the dark with no cameras or microphones.)

As the Executive Director of The LAMP, I wake up every day firm in the belief that a democratic, media literate public depends on independent journalism and diverse voices. The ability of any political leader to deny coverage of an event flies in the face of our rights to a free press. Mortman says C-SPAN has been asking for its own cameras in the House for several years, but leaders of both parties have denied the network. Were it not for today's temporary blackout, most Americans - myself included - would not have been aware of this, partially because we take C-SPAN for granted. It's also because a less-than-free press is not typically newsworthy, lacking as it is in any urgency.

It is difficult to come up with any silver linings that can be borne of a horrific mass shooting such as the one in Orlando. Americans may not all agree about gun rights and legislation, but I do believe we can agree that we have a right to know what our elected representatives are doing during a day at the office. C-SPAN, a nonprofit, was founded on this premise 37 years ago, and it's reprehensible for the leader of any political party to stand in the way. Perhaps this is the moment C-SPAN finally gets its own cameras - or perhaps this is the moment they set up a tripod and a smartphone in the gallery of the House.

Stay tuned for more news, and get plenty of resources for decoding media, by following The LAMP on Twitter at @thelampnyc or visiting online at www.thelamp.org.