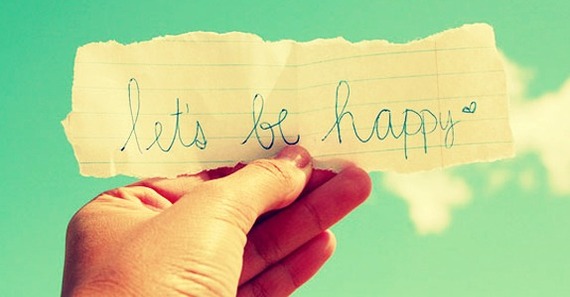 It's that time of year again.

It's time to start looking toward the future, setting goals, and planning out what 2016 is going to be for you.

As a fitness coach, I hear a lot about people's New Year's resolutions. In fact, the most common resolutions are always related to personal health:

"I am going to lose weight."

"I will exercise more."

"I will start eating healthier."

These goals are great, but maybe it's time to think a bit bigger. What is the end goal that any resolution hopes to achieve?

We all want to be happier.

Whether it's eating better, making new friends, saving money, traveling more often, or anything else, the driver behind resolutions is personal growth and increased happiness in life.

But can you find happiness by setting resolutions for the New Year?

Back in the 1970s Jigme Singye Wangchuck, King of Bhutan, launched a project to measure the "Gross National Happiness" (GNH) of his country. Just as economic growth is planned for and measured in terms of Gross Domestic Product (GDP), Wangchuck sought to discover what makes his citizens happy so that he could help deliver more of those key variables.

Extensive research led Wangchuck and his team to conclude that nine variables are largely responsible for a person's happiness: psychological wellbeing, health, education, culture, good governance, community, ecological diversity, living standards, and use of time. Each of those categories was further dissected to reveal a total of 33 happiness indicators.

In essence, GNH is a happiness roadmap. Choosing to pursue or improve on any of these indictors should lead to greater fulfillment and more happiness.

If the road to happiness has been revealed, then why does it still seem so hard to attain? Why do so many of us keep making the same resolutions year after year without reaching the end goal we're looking for?

Let's, for example, look at one of the GNH indicators: Research showed that getting more sleep leads to greater happiness. Sounds simple enough - Go to bed earlier and you will be happy! Unfortunately, the saying, "Old habits die hard" carries a lot of truth.

Historically many life-change gurus have promoted the notion that new habits can be formed in 21 days. So, establishing a habit of going to bed earlier would simply take three weeks of practicing this behavior.

You could do that, right?

Recent research however, has found that real change takes at least 66 days of consistent practice! Going to bed earlier for more than 66 days is a much more ambitious goal than doing it for just three weeks. No wonder we struggle to implement change even when we know what it is we need to do.

Gretchen Rubin, New York Times best-selling author, tackles this problem in her book The Happiness Project. In the book Rubin set out on a yearlong quest for improved happiness. She identified 12 variables, similar to those discovered in the GNH study, that would provide her with a happier life and she dedicated one month to work on each variable.

Instead of embarking on huge changes or tackling multiple goals at once, Rubin focused on achieving small "wins" that would produce a large cumulative effect over time. She chose simple actions like cleaning out her closet that would make her life feel lighter and happier.

The same potential is there for you. So, when you begin thinking about this upcoming year, ask yourself, "What can I do to make 2016 the happiest year of my life?"

Maybe it's scheduling more time for exercise, learning to prepare healthier meals, getting to bed earlier, or making more time to spend with friends and family.

The key is to identify YOUR personal happiness indicators and then start taking small steps towards improving those areas. This will help you find the happiness you are looking for!

More:
healthy livingnew year's resolutionsgoalshappyhow to be happy
Newsletter Sign Up
An essential daily guide to achieving the good life
Subscribe to our lifestyle email.
Successfully Subscribed!
Realness delivered to your inbox