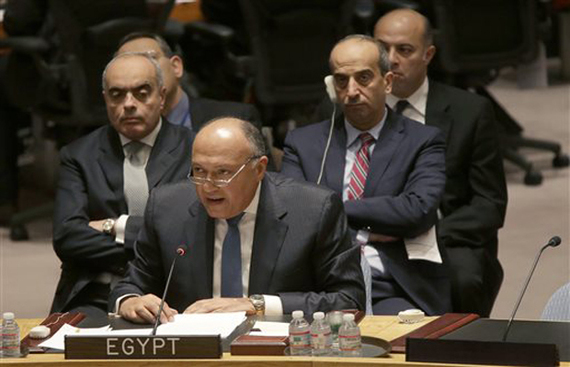 On October 13th 1957, Nasser of Egypt -allegedly backed by the Soviets- sent troops to the Syrian coastal city Latakia in an attempt to deter the Turkish forces from aggression against its Northern ally. The America-Syria crazy summer of 1957 ended by a political agreement between the two global poles at the time. As a result, General Afif al-Bizri, the Syrian Army's Chief of staff arrived in Cairo in early 1958 urging Nasser to establish the United Arab Republic (UAR) to safeguard Syria from external threats. Sixty years passed, and we still hear similar pan-Arab discourses on the need for an Egyptian interventionist approach in the fragmented Middle East. Nevertheless, Egypt's National Grand Strategy and interests in post-2011 triumphs political non-interventionist approach to end both the Syrian and Libyan crises. Still, Egypt's role is prominent and no solution will be in display without an Egyptian consent and engagement.

If you would go anywhere in the Levant; the most prominent family's name is "al-Masri" The Egyptian. These are the remnants of Muhamad Ali's (1769-1849) troops that remained in many parts of Syria, Lebanon, Jordan and Palestine till the moment after his war against the Ottoman Empire. Besides, the Egyptian dialect of Arabic is the only comprehendible one across the region and it's been the wedge of the Middle East. Egyptians -both on local and state levels- see no end to the Syrian and Libyan crises but a political roadmap that includes everyone except for extremists who will never accept the basic conception of a nation-state and seek no desire for international peace. Egypt's National Security in terms of geopolitics starts from its historic Northern Arab ally "Syria," and to the West from "Algeria," thus Syria and Libya are indispensable for Egypt's stability, as a nation-state, regardless of the political regime ruling Cairo.

Since the first Gulf war, Egypt has remained attentive to the developments taking place in its region and sphere of interest; the fall of Iraq, the Iranian nuclear program, and the developments on the African continent with specific reference to the Nile Basin countries and stability in the African Horn. However, the unpredicted events of the Arab uprisings topped these episodes in shaping Egypt's stable foreign policy. The 25th of January brought Egypt and its people back to life; a life that is -normally like transitory periods- packed with infinite domestic challenges, unsettled regional conflicts, and a domino-like dropping neighbors. These have been exacerbated by rising sectarian conflicts beclouding the region. However, Egypt was demanded, by its own people and the regional partners, to assume its irreplaceable historic responsibilities as the pivotal anchor for prudence and stability at time unrest was slipping into its own soil. Not only that, but Egypt has undergone the Muslim Brotherhood (MB) experience that deemed a sectarian break down inevitable and has largely influenced Egypt's politics on the regional arena. By the end of 2013, Egypt was fortunately able to hold itself back on track and to expedite a delicate development-induced stability formula. Since then, Egypt's foreign policy has been at an all-new liveliness.

In February 2016, as the Egypt 2030 strategy was being presented, Egypt's new political leadership outlined the country's National Grand Strategy for the next 14-years in two main lines; Survival and Development. This is projected on Egypt's vision of its own dynamics and to the region as a whole. On different occasions, Mr. Sameh Shoukry, Egypt's foreign minister, has outlined the determinants of Egypt's foreign policy; to succor the domestic development strategy; to open to prominent experiences; to steer efforts to combat terrorism and to labor to entrench Egypt's role in settling the region's ongoing crisis. Egypt shall be an enemy of no one, seeking cooperation with all its neighbors, regional and international players. It is in our best interest to be open to everyone, not slip with any amateurish/confrontational acts from anyone and remain rational in outlining our vision for the third Republic of Egypt.

In its efforts to combat terrorism and in its own experience, Egypt has held the MB and its affiliate groups' ideology responsible for all sort of extremism thinking in the region. In this regard, Egypt has waged a bold-costly war against Jihadists in Sinai. Egypt's army proved to be efficient in doing so and to be the only Middle Eastern army that can endure a long-lasting conformation with non-state militia. Other state experiences' back such deduction. It also continues to carry out deliberate efforts in safeguarding its Libyan western borders. On a regional and international level, Egypt has steadily condemned supporting Jihadists in Syria, Libya, or Iraq for attaining narrow self-interests by some regional and world powers. Egypt always warns against this idealistic-naive view of including Salafi-Jihadi fighters in any future political deal. History gives us clear lessons on that. From an Egyptian point of view, Syrians has to scratch their backs. No one will bear the consequences of their problems or deal with the issue of suffering millions of refugees but Syrians. They have to reach a political consensus on their own with the help of their Arab neighbors. In fact the Middle East has not changed much in 100 years, only Arabs have solutions for their own difficulties. Additionally, Egypt was elected to the UN Security Council non-permanent seat for Africa and it pledged to gear its efforts in combating terrorism on a multilateral level. Above all, the terrorism security-pillar wasn't isolated, but came in through a comprehensive approach by which economic, religious and social reasons were also tackled.

In solidifying its role in the region, Egypt's defining principles were denouncing support for any type of Jihadists, preserving unity of the states as in Syria and Libya, abiding with international law and committing to multilateral efforts for political resolutions, and developing a region-based security approach translated into the Joint Arab Forces (JAF). However, JAF is not an offensive force in Egypt's vision; it's for deterrence against potential threats that may face Egypt and its regional allies. These principles weren't born overnight but through a long experience with the region and deep understanding for its complexity that was convoluted by Jihad. First, supporting Salafi-Jihadists has always backfired and it has only furthered the sectarian divisions. Add to this, with augmented capacities, their operations extended to far-reaching regions and Europe was just a witness. Second, Egypt gives a due care to the preservation of states' institutions of the Arab neighbors, as in Syria and Libya, while ensuring their reform. Otherwise it would represent an imminent threat to disintegration of these states, hence, further instability in the region and impairment of its states. Building institutions from the scratch will never work in the Middle East. The world, should perhaps focus on the preservation of current state structures rather on who will run what? Third, respect for international law and multilateral efforts have been permanent features in Egypt's foreign diplomacy, for it otherwise threatens the stability of the international order. Thus, Egypt commits an unconditional support for multilateral efforts, whether regional through the Arab League or international through the United Nations, to conclude on peaceful political settlements. Moreover, on the painful accident of beheading 21 Egyptians in Sirte, Egypt had to commit itself to the UN charter in retaining its inherent right of self-defense to launch its attack on ISIL's offshoot in Libya.

Egypt's foreign policy outlook is characterized as always by simple traits of Egyptian people; namely patience, consistency, flexibility and endurance. These policies showcase a model for reproduction in the rising Middle East. The events in the region are still developing and evolving and it is too early to foresee where the current changes lead to; engagement thus must be calculated wisely. Some regional and international partners can find Egypt's foreign policy position frustrating, selfish or even slow; however, it is better to be patient and consistent rather to go bankrupt at the end. It is Egypt's National Grand Strategy and interests that shape its foreign policy determinants in the current phase. Egypt's current political leadership did not react to any amateurish, childish actions, with a high demand on emotional- uncalculated measures. Plus, unlike other states, Egypt has no bills to pay for anyone neither in Syria nor in Libya. We believe that an Arab-produced solution -with Egypt in the forefront- can ensure stability in the Middle East. Back in 1957, neither Eisenhower nor Khrushchev succeeded in dealing with this complicated part of the world. And their successors will most likely fail to achieve better results unless experienced regional players incorporate their insights. Cooperation and mutual understanding are what we need to ensure stability to the region and accordingly our greater world.