Think about the times you've been able to sense your heart -- the puttering, lub-dub after an exhaustive workout or an adrenaline-fueled moment. If you're healthy, these should be the rare moments where you're aware of your own heartbeat. It's been previously assumed that this is because of the brain, but until now scientists haven't known exactly how this works.

That was until this week: Scientists from Ecole Polytechnique Federale de Lausanne, a research institute in Switzerland, are the first to identify what exactly happens in the brain that keeps us from being constantly aware of our own heartbeat. They found that the brain filters out cardiac sensations, while still perceiving external sensations -- a purposeful avoidance of processing information.

"We are not objective, and we don't see everything that hits our retina like a video camera does," said co-author Roy Salomon in a statement. "The brain itself decides which information to bring to awareness."

"But what's surprising is that our heart also affects what we see!"

In his paper, published this week in the Journal of Neuroscience, Salomon and his team write that to discover this, they carried out two brain imaging experiments with 150 volunteers. The experiments consisted of a variation of geometric shapes flashing, sometimes in sync with the subject's heartbeat. A high-resolution fMRI of each subject revealed that when the shape flashed in time with the heartbeat, the subject had more difficulties perceiving it. 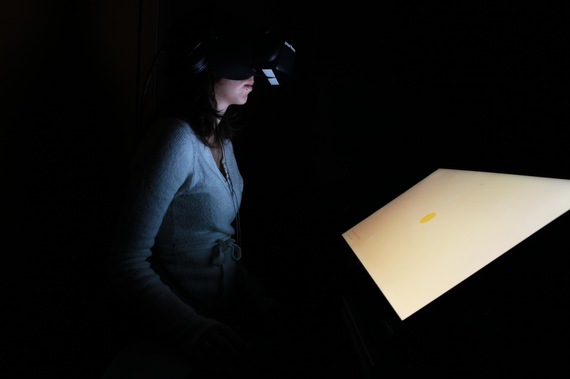 EPFL's neuroscientists noted that the brain perceives visual stimuli less effectively if they occur in time with the heartbeat.

The team discovered that it is the brain's insular cortex that specifically acts as a filter between the sensations of the heart and the brain. When the stimuli wasn't in sync, the insular cortex acted as usual, and when it was, the level of electrical activity there dropped. This action, the team writes, is an unconscious processing of signals -- and is in your best interest.

Previous research has found that awareness of one's heartbeat is what can lead to anxiety and other psychological issues.

"You don't want your internal sensations to interfere with your external ones," says Salomon. "It's in your interest to be aware of what's outside you. Since our heart was already beating while our brain was still forming, we've been exposed to it since the very start of our existence. So it's not surprising that the brain acts to suppress it and make it less apparent."

Of course, we can still hear other people's heartbeats.