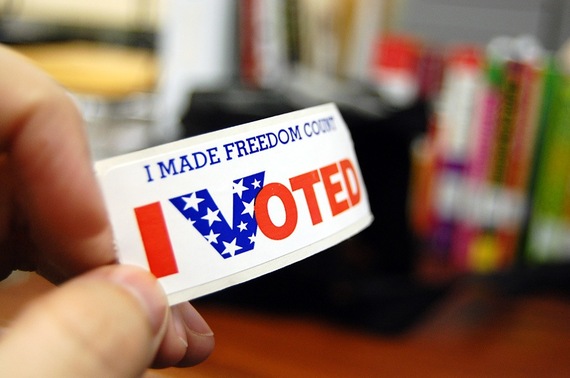 It's the American political process that gave us a word like "gerrymandering," the redrawing of electoral boundaries to favor one party over another. Rather than see the United States innovate on methods to increase voting, we still largely depend on filling in circles with a pencil or making literal holes in a piece of paper to cast our ballots.

This is not the case around the world, where citizens of some countries use technologically enabled voting that's easy and convenient to use. And some of them aren't even "cool" countries.

Consider Estonia, the Baltic nation of 1.3 million people, which kicked off its internet voting system in 2005. By the country's 2015 Parliamentary election, 176,491 people making up 30.5 percent of eligible Estonian voters cast their votes online. Estonia is one of the most internet-focused countries in Eastern Europe, so perhaps the only reason that rate isn't higher is that some people still enjoy missing work to go to the polls.

Machines are sufficiently advanced enough to identify humans based on certain unchangeable features of our bodies, like our retinal scans and fingerprints. You see this in action every time you activate an iPhone by touching your thumb to its fingerprint-reading surface.

And Amazon has a selfie patent so people will be able to pay with their faces, and MasterCard is implementing a "selfie security system."

This technology surely could be implemented for voting, no?

To answer this question, we look to the perhaps unlikely countries of Uganda and Ghana, where biometric voting is already implemented. Despite hurdles -- some Ghanaian voting machines broke down and contributed to long waits to vote -- the new technology was largely seen as a success. Though the voter experience with it was far from perfect, the seeds of technological progress are being planted far from the first world.

So why can't we vote with a selfie, straight from our phones, and choose our candidate by blinking or winking? (Imagine: "Wink once for Trump, twice for Clinton"). If Snapchat is smart enough to swap your head with someone else's, surely we have the technology to choose a face out of a lineup and figure out which of your eyes are closed.

A since-defunct company called Election.com facilitated the internet component of Arizona's notorious 2000 election, but its efforts were met with cries of civil rights concerns involving the state's significant Native American population, threats of cyberattack, and legal efforts to stop the election from ever taking place. None of these were successful, and the election was carried out in-part online. As Al Gore invented the internet, it's perhaps fitting that he won, but there's still debate over if his victory was legit: was it a private election outside of federal jurisdiction, some kind of hybrid between public and private election, or a conventional primary that happened to have an online voting component?

Because there will always be room for distrust in technology, and because politics' flirtations with distrust are well-chronicled, it seems that Americans will cling to pencil and paper as they determine the next leader of the free world.

India is perhaps leading the way when it comes to electronic voting. As the country has the second-largest population in the world, it has been using digital technology since 1982 to wrangle and count all those votes. Its electronic voting machines, or EVMs, cost about $400 apiece and let pollsters instantly know an election's results, down to how many people voted for which candidate at a given polling station. In 2011, the country took its voting online when the state of Gujarat implemented internet-based voting.

David Bismark is the developer behind an electronic voting system that presents itself as "the Bitcoin of voting." His system is hyper-secure, accurately counting votes while shielding the voter's identity from abuse of power. It involves using elaborate cryptographic techniques to keep everyone's vote secret. His lays out his ideas in the following TED talk:

Meanwhile, all those selfies we take go on being largely meaningless when they could be contributing to our national discourse.