Today I voted, and then I cried.

Yes -- if ever anyone put the "bleeding heart" in "liberal," it is me.

I've spent my whole life baffled by the arbitrary divisions human beings create and then treat as carved-in-stone excuses for bad behavior:

The moment in childhood when it dawned on me that my sex would be a burden was surreal. Why on earth would it matter what I've got between my legs? It's never stopped catching me off guard, the way some people see my gender first, my substance second -- if at all.

But in time, I got the message. For reasons beyond the convenience of being able to urinate pretty much anywhere, it became clear to me that men have a fairly sweet deal.

This female body of mine, it's been subjected to sexual abuse and rape. It's weathered a difficult pregnancy and delivered a mercifully healthy child. It's harbored cancerous cells, and had them carved from my cervix and uterus by multiple surgeries over the course of a decade. It's tolerated the times I stood before the mirror and wished it were something different.

I am a white, middle-class American woman. I've got a roof over my head, food in my belly, work I enjoy every day. For most of my life, I've had the benefit of access to education and health care, and when shit hit the fan, damn good therapy.

If you're going to be born female, possessed of one of those pussies some men feel free to grab, this is about as good as it gets.

The times I've felt trapped by my biology are dwarfed by what girls and women suffer the world over, and what my predecessors endured to make my life easier.

I carried them with me into the voting booth today - the suffragettes who fought for my rights, and the women who have yet to receive theirs - and I wept with the privilege of casting my vote for the first woman President in United States history. 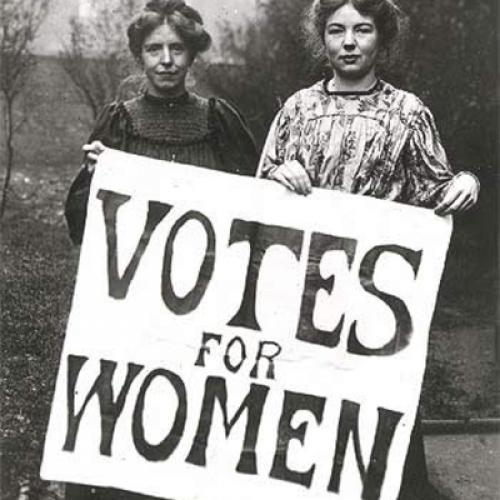 You can -- and I know, many of you will -- say what you like (or more accurately, dislike) about Hillary. As with any good, old-fashioned witch-ducking, she is damned no matter what.

But here's what I see in Hillary Clinton, and what I hope will make all Americans feel proud once the dust has settled:

She is incredibly intelligent and hardworking, with a record of public service equalled by few.

She has accomplished the near-impossible feat of spending her entire adult life in the public eye without losing her optimism, vision, or drive.

She is unflappable, pausing before acting in a way that is the soul of diplomacy.

She is far and away the most qualified candidate we've ever had on the ticket.

That she is female is notable only given the history of this nation and the office of President.

So yes, today I cast my vote - and then I cried.

Because I am what I am.

And today I am grateful to be living in a time and a place where that is, at long last, enough.