More than two decades ago, in the early 1990s, the task at hand for some of us in Detroit was still to try to save Tiger Stadium. It's a long story, but in a city with a Third World-level infant mortality rate and many other severe problems, there was a lot more at stake than baseball or nostalgia. In those now long-ago days, among the active inner core of the Tiger Stadium Fan Club, Tom Derry and I were the two young single guys, so we palled around a bit. 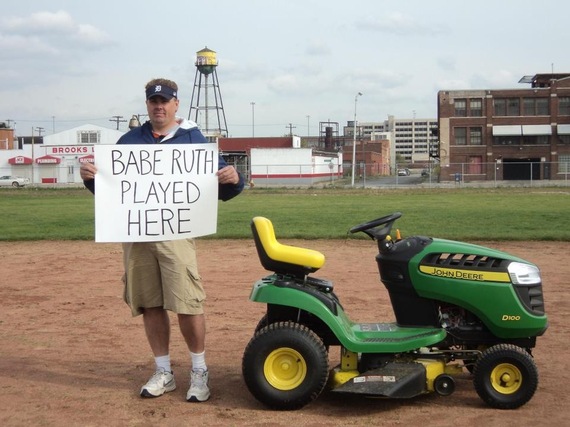 The leadership qualities of other, older fan club leaders like Frank Rashid were more obvious. Tom's charisma, by contrast, is quiet and unassuming, and all the more impressive given that, despite being physically a big guy, Tom never imposes himself. All Tom does is take the lead when the lead needs taking and call 'em like he sees 'em. "I don't see why we can't just say the truth," I remember him saying at a fan club meeting where strategies were being debated. "If it's the truth, we should say it." It had the oracular authority of a statement of the profoundly obvious. Most people avert their eyes from the profoundly obvious, but Tom doesn't. Another thing I remember him saying in the same vein was, "Why are you a writer? Because you couldn't be a major league baseball player. Same reason I'm a mailman."

Less steadfast and more restless than Tom, I left town. Tiger Stadium was needlessly destroyed, and those of us who would have it otherwise have had to deal with the sad and ugly truth that things that shouldn't happen often happen anyway. Tom figures prominently in Chapter 2 of my book Home Free: An American Road Trip. One thing I've relearned since revisiting Detroit and reconnecting with him in 2012 is that, even faced with painful material or political or personal loss, we remain in control of both our choices and our attitude.

Tom is still the same youthful, upbeat fellow I knew 20-plus years ago, albeit now with a touch of gray at the temples. And he still takes the lead when the lead needs to be taken. One way he does this is through the Navin Field Grounds Crew, the wonderful group of volunteers who maintain the field at Michigan and Trumbull because the City of Detroit won't do it and it should be done.

"It still pisses me off, Tom," I said to him when we visited the field together. "I know you've had a lot more practice at not being angry ..."

"I think it's because I've gotten so involved in cleaning it up," he said.

That's Tom for you. He'd rather do something positive and helpful, whatever can be done now, than waste time and emotional energy being mad about things that can't be helped anymore. Tom's other labor of love is the annual Babe Ruth Birthday Party in early February. He was already doing it, at his house, when I lived in Detroit.

"You were there," he reminded me. "I've got a picture of you. It's not real close up, but there's a bunch of people in it, like John and Judy Davids and the Burke sisters. And you can point and go, 'Yeah, that's Ethan Casey.'"

It's humbling to be reminded that I was there, because the Ruth Party has since burgeoned into a greatly appreciated Detroit institution. Recent Ruth Parties have attracted more than 700 people -- let's call it 714 people, one for each Ruth homer -- to Nemo's Bar on Michigan Avenue, a block east of Tiger Stadium.

Tom Derry's 27th annual Babe Ruth Birthday Party will be held at Nemo's starting at 7:14 p.m. on Saturday, February 1. I hear there's going to be some big football game the next day, but there's no better time than early February, with spring training around the corner, to celebrate baseball. But why hold a birthday party for Babe Ruth, of all people, in Detroit? Why not? The answer is profoundly obvious. For one thing, Ruth spent a lot of time eating, drinking and performing baseballic heroics in Detroit. To Tom, the connection between Ruth and Detroit is so profoundly obvious that he and his fiancee are planning their wedding around it.

"Sarah and I will be married at home plate August 3," Tom told me. "Sarah gets to stand in the left-handed batter's box, the same place where Ruth batted for the Red Sox and Yankees. How cool is that?"

That's pretty damn cool. If you're in Michigan, come to the Ruth Party at Nemo's on February 1 -- or come to next year's 28th annual Ruth Party -- to get all the inside baseball.

Ethan Casey is the co-author, with Michael Betzold, of Queen of Diamonds: The Tiger Stadium Story (1991) and author of Home Free: An American Road Trip (2013).