When Neil Sadaka sang the 1962 hit "Breaking Up Is Hard To Do," he probably didn't know that technological advances in the next half century would make romantic splits exponentially harder. Breaking up today means more than just separating from your partner -- it can mean having to watch him or her seem totally over it on social media. While you're at home moping, your ex is seemingly out enjoying an Instagram-worthy brunch or attending what looks like the most fun party ever on Facebook. Even worse, your ex could find someone new and document their trysts for the entire Internet (read: you) to see. Now you're not only alone, but you think you've lost the breakup.

Studies have shown that maintaining contact with an ex can prolong the distress of breakups. So why do we keep tabs on our exes if it only makes us feel worse? A new study out of the University of Hawaii at Manoa and Ohio State University looked at which types of people tended to Facebook stalk former partners in the wake of a breakup.

Researchers gathered 150 men and 281 women between the ages of 18 and 42 for their survey. Participants had all experienced a breakup within the last year, and they could see their ex's profile on Facebook. The survey measured participants' attachment styles -- whether they had an anxious attachment style ("associated with a diminished sense of self-worth" and "related to feelings of uncertainty about relationships") or an avoidant attachment style ("associated with diminished trust in others, resulting in a tendency to avoid close relationships"). To do this, the researchers used a standardized scale that asked participants how much they agreed or disagreed with statements like "I need a lot of reassurance that I am loved by my partner," "I try to avoid getting too close to my partner" and "I usually discuss my problems and concerns with my partner. "

The survey also looked at who initiated the breakup, how invested and committed participants were in the relationship and how many relationship alternatives (i.e. other potential partners) they noticed while in that relationship. Additionally, the survey measured how distressed they were after the breakup and how often they kept tabs on their former partners on Facebook following the breakup.

After analyzing survey responses, the researchers found that those with an anxious attachment style tended to be more invested and committed in their previous relationship, which in turn was associated with more emotional distress and ﻿more﻿ Facebook stalking post-split. And for those anxious attachers who didn't initiate the breakup, the link between distress and Facebook stalking was even stronger. In a word: oy.

These findings suggest that partners more hurt by a breakup are the ones who are more likely to prolong their suffering by Facebook stalking an ex. As the researchers put it, social media sites are like "virtual scrapbooks for relationships" which jilted lovers can turn to when they want to masochistically ruminate on what they once had while spying on their former partner.

The researchers suggest that, if you're distraught about a breakup, you might want to consider disconnecting from your ex on Facebook and other social media sites. As hard as that might seem, it doesn't sound like such a bad idea. After all, what good can be had wasting mental energy trying to figure out if the blonde in your ex's new profile picture is the new you? There's an entire IRL world out there that opens up when you're newly independent and uncoupled -- stop scrolling, go forth and enjoy it. 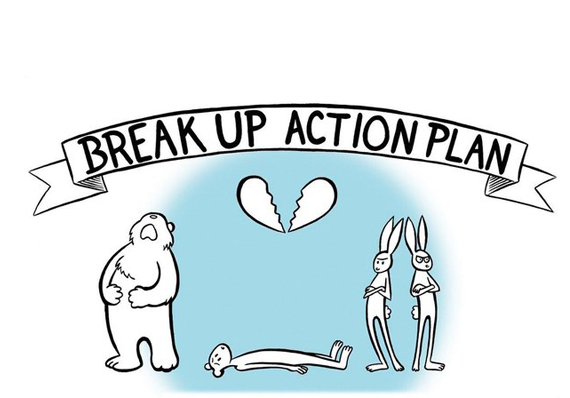