The Passover holiday commemorates the exodus of Jews from slavery in Egypt. It's a celebration of freedom. On this basis alone Christians should join Jews in celebrating Passover. Why? No exodus, no Christianity.

But there's a more persuasive reason. In Jesus' time, Passover was the holiest celebration on the Jewish calendar. Hundreds of thousands of Jews from surrounding nations and communities poured into Jerusalem for the annual festival.

For Jesus, a dedicated practicing Jew, Passover was a seminal event. Although the Gospels do not give us a fully developed biography of Jesus, they do make it clear that Passover looms large in his life.

After announcing his birth the Gospel of Matthew (2:13-16) reports that Jesus was taken to Egypt to escape the edict of King Herod to kill all Jewish children in Bethlehem two years old and younger. According to the Gospel of Luke (2:21-22), after the birth of Jesus, Mary performs the Jewish rituals and prayers mandated by the Torah and the family returns to Nazareth. In Matthew, the family returns to Nazareth from Egypt about six years later, after the death of Herod (Matthew 2:19-21).

Then there is no news of Jesus for six years. The only thing we learn about him during this time gap is that he and his family traveled to Jerusalem every year for Passover, as cited in the Gospel of Luke (2:41) :

"Now His parents went to Jerusalem every year at the Feast of the Passover."

This arduous eighty-mile trip over crude roads, with donkeys, provisions, and lambs for the ritual sacrifice, could take as long as seven days. Jesus' family's faithful participation is a testament to their dedication to Judaism and the Torah--and the importance of Passover in their religious practices.

We next meet Jesus at age twelve at that year's Passover celebration in Jerusalem. During his family's return trip from the festival, Mary and Joseph noticed that Jesus was not among the extended family and other Jews from Nazareth. They returned to Jerusalem to search for him and found Jesus in the Temple debating the Torah with learned rabbis.


And when they had fulfilled the days, as they returned, the child Jesus tarried behind in Jerusalem; and Joseph and his mother knew not of it. But they, supposing him to have been in the company, went a day's journey; and they sought him among their kinsfolk and acquaintance. And when they found him not, they turned back again to Jerusalem, seeking him. And it came to pass, that after three days they found him in the temple, sitting in the midst of the doctors, both hearing them, and asking them questions. And all that heard him were astonished at his understanding and answers ( Luke 2: 42-47).

After this incident, Jesus again vanishes from the Gospels, this time for eighteen years. He resurfaces at age thirty when he is baptized by John the Baptist in the river Jordan and his ministry begins. Three years later, at the end of his ministry, Passover again takes center stage among events that will be monumental for Christianity and the world. Early on the day of the Passover feast, before Jesus is arrested in Gethsemane garden, the event that leads to his trial and crucifixion, he tells his disciples to prepare the traditional Jewish Passover as prescribed in the Torah:

Then came the day of unleavened bread, when the Passover must be killed [meaning when the Passover lamb had to be sacrificed and eaten]. And he sent Peter and John, saying, Go and prepare us the Passover, that we may eat. And they said unto him, Where wilt thou that we prepare? And he said unto them, Behold, when ye are entered into the city, there shall a man meet you, bearing a pitcher of water; follow him into the house where he entereth in. And ye shall say unto the goodman of the house, The Master saith unto thee, Where is the guest chamber where I shall eat the Passover with my disciples? And he shall shew you a large upper room furnished: there make ready. And they went, and found as he had said unto them: and they made ready the Passover. (Luke 22:7-13).

That on the very day that Jesus forecast his imminent death he chose to celebrate the traditional Passover meal with his Disciples is a powerful statement of the importance of Passover in his life and his dedication to Judaism.

Unfortunately, art representations of the Passover Last Supper, the chief means by which the largely illiterate Medieval and Renaissance European populations learned about this important holiday, typically presented it as a Christian celebration, when it was exclusively a Jewish event.

Even Leonardo Da Vinci's Last Supper looks like a gathering of monks rather than a Passover Seder attended by dedicated Jews. And as Ross King, author of Leonardo and the Last Supper, has noted, the foods on the table are not the traditional ones for Passover; indeed, items such as eel and bread would have been a desecration according to the Torah. Moreover, it is known that Jesus ate only kosher food. 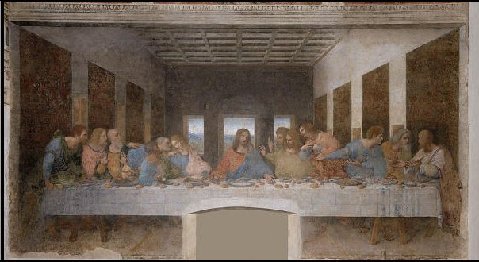 Other representations even more explicitly convert the Passover celebration into a Christian event, with the anachronism of Christian monks in attendance, as in Fra Angelico's 1451 depiction, which takes place in a monk's cell. 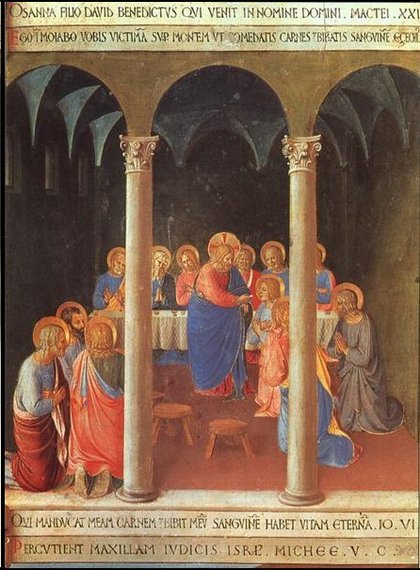 Communion of the Apostles by Fra Angelico--wikiart.org

The fact that Jesus and his disciples were dedicated practicing Jews, as reflected in their Passover observance, is often overshadowed by emphasis on the ceremony at the end of Jesus' Passover Seder, which became the Eucharist sacrament in Christianity. 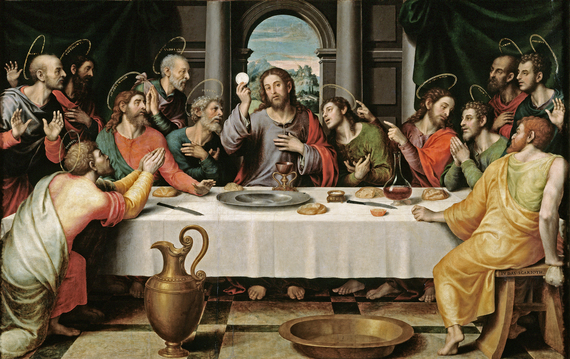 These distortions are typical of a vast trove of Renaissance artworks that omit Jesus' Jewish identity and heritage and instead picture him as a Renaissance-era Christian in settings alien to his origins in the Jewish village of Nazareth. Sadly, these falsifications of biblical history have served to drive Christians and Jews apart.

Over the centuries the Passover Seder has evolved to reflect the different cultures of Jews as they scattered throughout the world after the destruction of the Temple in Jerusalem in 70 CE. Today, in addition to retelling of the story of the exodus from Egypt, may Jews include in their Haggadahs (the Passover ceremony guide) contemporary and personal perspectives on freedom, slavery, and other social issues.

In the present era of reconciliation, as reflected in Pope Francis' pronouncement that "inside every Christian is Jew," the Passover celebration offers Christians an opportunity to reconnect with the common foundation of the two faiths and experience the authentic Jesus as he lived and worshiped.

At the same time they can add to their Passover celebrations issues from a Christian perspective while honoring the Exodus and freedom.