Since the Brexit vote, the UK has focused on the immediate political, constitutional and economic implications. With the pound sterling down by roughly 10%, UK business confidence at its lowest in 4 ½ years and consumer sentiment dropping to a two-decade low, Brexit's aftershocks have been quick to appear. But the longer term effects--what Brexit means for climate change, for example--won't be fully understood for months or even years as the UK struggles to work out a trade negotiation strategy.

Nonetheless, we're already seeing indications of the second-order effects to come. One kneejerk reaction has been a selloff in the price of carbon, which has been down 15% since the vote and more than 40% since January. 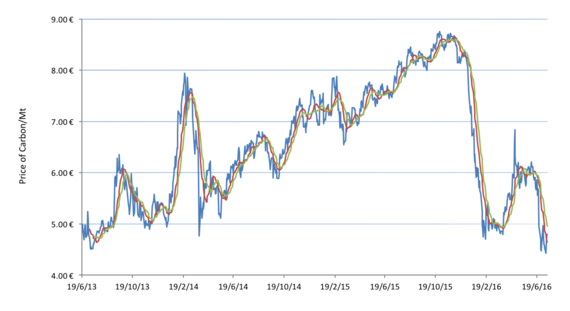 In an article written before the Brexit vote, I suggested that the EU faces the difficult choice between an EU-imposed, top-down climate policy agenda or a bottom-up, state-driven policy. The UK referendum represents just one of several potential domestic flare-ups that could complicate the EU's path towards ratifying the Paris Agreement. Four national elections and at least two referendums from Italy and Hungary are to come over the next 18 months, each capable of depriving the EU of critical resources and energy going into the COP22 climate proceedings this November.

For the UK, Brexit's implications for climate change have been less understood in the transition between governments. While Boris Johnson's miraculous resurrection as Foreign Secretary captured the media's attention, we mustn't overlook the conspicuous holes in Theresa May's reorganization. To make room for the new Brexit and International Trade departments, May has now integrated the Department of Energy and Climate Change (DECC) into a Department of Business, Energy and Industrial Strategy headed by Greg Clark.

The integration may make business sense, but the department's new title suggests climate change has now been positioned primarily as a strategic industry to drive economic growth. But the great risk here is that the business of monetizing climate change gets in the way of climate policy-setting. Indeed, the risk of regulatory capture should itself be a strong enough argument for dedicated oversight on energy and climate change policy.

At best, the reorganization suggests May's government is deprioritizing climate change. At worst, the move speaks to fears of a dismantling by Tory climate sceptics. The words of Mary Creagh, Labour MP and Chair of the Parliament Environmental Audit Committee, seem prescient: "Euroscepticism and climate scepticism are often two horns of the same goat."

Brexit also presents a bigger climate change challenge for the rest of the EU. At 13% of total EU greenhouse gas emissions, the UK is the second largest greenhouse producer, but it has also been one of the most aggressive in terms of commitment to greenhouse reductions. In its 5th Carbon Budget announced at the end of June, the UK not only renewed its commitment to climate legislation but increased its 2032 reduction target to 57% compared to its previous target of 50%. The EU, by contrast, only seeks a 40% reduction by 2030.

The EU's smaller emissions reduction target, however, still depends on the UK, Germany, France and Italy whose aggressive emissions cuts compensate for the contribution shortfall from other countries. Without the UK, the 27-member EU will have to find a way to cut greenhouse gas emissions by an additional 7% in order to hit its original 40% target by 2030.

Germany is already gearing up towards more ambitious cuts and signalling their intent to ratify the Paris Agreement by COP22 as France did last month. But with the UK out, climate laggards like Poland and the Czech Republic would need to carry more of their own weight. Few other EU countries have the resources to make up for the UK's departure in short-order.

The EU may disclose next week how its burden-sharing expectations--signed at COP21 and originally including the UK--will change under its 2030 emissions reduction plan. The growing risk now is that the EU's collective effort towards ratification devolves into fragmented, single-state commitments that undermine the EU's international climate leadership role.

Other matters like the UK's participation in the EU Emissions Trading Scheme (ETS) pose further complication. There's strong rationale for why the UK should remain in the EU ETS, the least of which are driving ETS market reforms and supporting a strong global carbon price. But by the UK's own admission, there isn't a Brexit contingency plan--and unfortunately, the damage to ETS relations has already begun. Ian Duncan, Conservative MEP from Scotland who led ETS reforms at the European Parliament, formally offered his resignation letter following the Brexit vote. Participation in the ETS as part of the single market will almost certainly conflict with the UK's refusal to accept the EU's freedom of movement stipulation.

Over the last decade, climate policy in Britain evolved by continuity and strong leadership through both Labour and Conservative governments. Brexit has potentially put at risk some of the progress made following last year's momentous Paris Agreement--the question is how much. According to Rahul Bansal, Deputy Director of Climate-KIC, a European Commission-funded public-partnership focused on climate change innovation, "In the short term, climate policy may take a back seat to the economic side effect of Brexit, but the issue is too large and important to remain contained in the long term. The UK will always play a leadership role in this area." For the EU, though, Brexit is unfortunately only one of several electoral speed bumps ahead down a much longer, unknown road.

In a post-Brexit speech at the Business & Climate Summit two weeks ago, Amber Rudd--formerly head of DECC and now May's new Home Secretary--subtly hinted at a new pragmatism without demoting climate change and pledged that the UK's international leadership role would not be diminished. While that offers some hope, the disappearance of DECC and the elevation of climate sceptics in cabinet positions suggests otherwise. Let's hope for the UK's sake--and the planet's--that Rudd's words ring true and Britain's climate change leadership and continuity is maintained.

J. Jason Mitchell is an essayist who writes on the intersection of environmental and socio-political issues.