Seven years after the Kindle debuted and more than twenty since the web went public, the publishing field still contemplates a transition from print to digital, a change that seems inevitable every time a baby swipes an iPad on Youtube. But anyone whose attention span has been radically rewired by the internet intuitively knows what scientific voices like Professor Maryanne Wolf are beginning to suggest: our brains process print media and digital media very differently when we read. Both modes have their strengths: digital media may favor executive multitasking and multimodal information processing, whereas print promotes "deep reading," contemplation and the synthesis of new ideas -- foundational skills for our civilization. So what are we supposed to do with this information? Do we accept the loss of deep reading in exchange for skills that can keep pace with our accelerating technology? Speaking to PRI International recently, Wolf offers a third way. "What we're after is a discerning 'bi-literate' brain," she argues. "That's going to take some wisdom on our part." But a thrilling model for "bi-literacy" already exists. And you can find it in comics.

A graphic novel section probably appeared in your local bookstore some time after the year 2000, featuring a growing number of great, book-length comics including Chris Ware's Jimmy Corrigan: The Smartest Kid on Earth and Art Spiegelman's earlier breakthrough, the Pulitzer Prize-winning Maus. Comics have come a long way in recent years, but the comics form is still often misunderstood. While closely aligned with literary culture, comics are also a kind of visual art. Like any art form, comics has its own medium-specific properties that allow us to express ideas that can't be expressed in any other way. But unlike our most traditional art forms -- painting, drawing, sculpture, textiles -- comics aren't necessarily made of any one material. More like collage, comics represent a conceptual strategy that can embrace all kinds of artwork into its method. And while we do also read comics, comics induce ways of reading that are very different from prose.

The particular syntax of comics has been most fully developed within the context of the single page format, so let's look at a really famous comics page. This iconic page has been frequently celebrated and analyzed precisely because of its many exemplary formal qualities. Spiegelman even discussed it in comics form for a 1987 piece in USA Today, and many examinations proceed from his analysis. Similarly, we can extend that analysis to articulate something fundamental about comics that also relates to our current cognitive confusion. 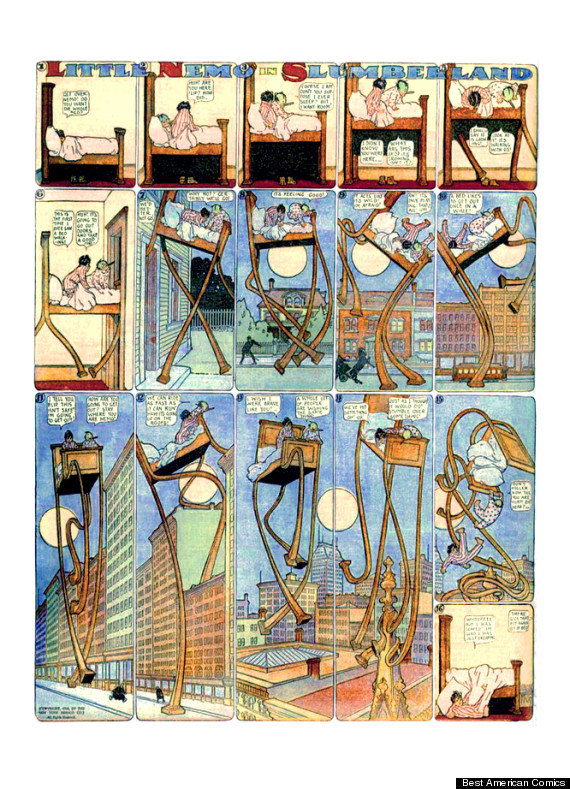 This comics page by Winsor McCay was published in American newspapers in 1908, years before most American homes even had radios. It's an episode of McCay's groundbreaking Sunday newspaper comic strip Little Nemo in Slumberland, a Wonderland-like weekly fantasy for children of all ages. In this compact little story, Little Nemo goes to sleep and dreams. The legs of his bed begin to grow and the bed comes to life, trotting like a horse out the door of his family's home. Nemo's bed keeps on growing as it journeys through the city, ultimately growing so tall that it skips over skyscrapers, and, finally, tumbles over a steeple, sending Nemo plummeting downward - back into his bed, and back into his waking life. 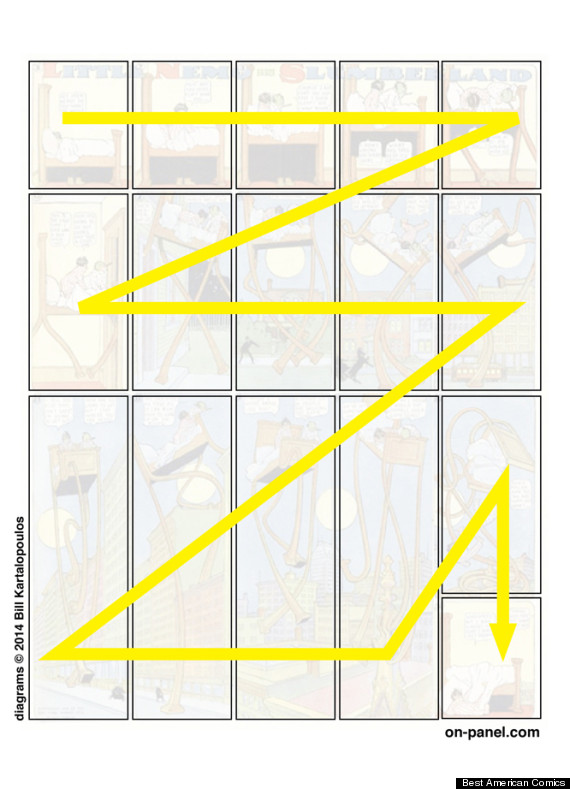 We get the narrative -- the "story part" -- of this comic strip by reading the panels in linear sequence, the way we read lines of type in a newspaper or a book. But if we knew nothing at all about the comic strip's story, what might the overall structure of this page tell us about its message? 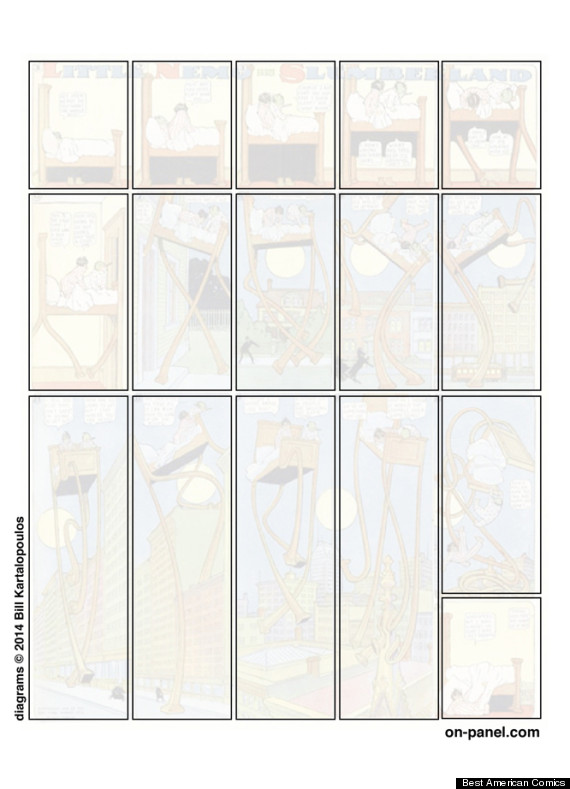 For one thing, the vertical arrangement of the progressively growing panels shows us that this page is telling us something about growth... 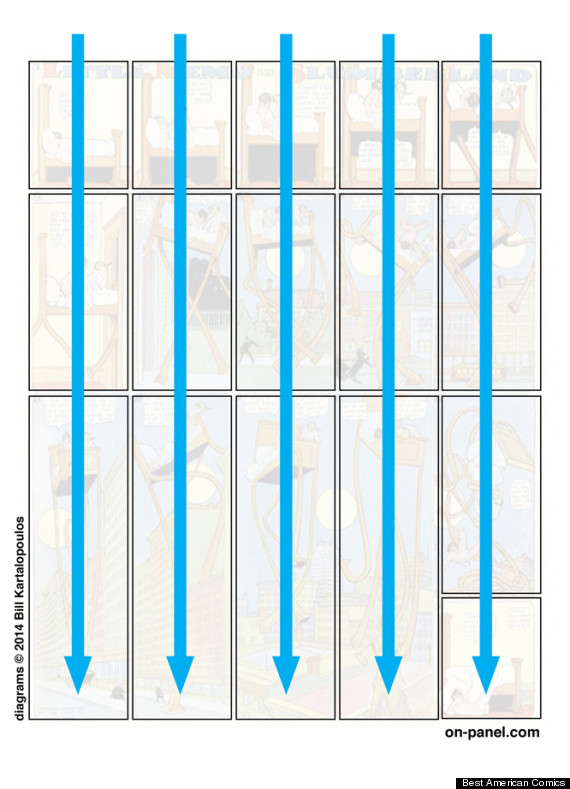 ...and the size and shape of the last panel, which is exactly the same size and shape as the first panel, diagonally indicates a cyclical return to "normalcy" that happens when Nemo wakes up in the bed where we first found him. 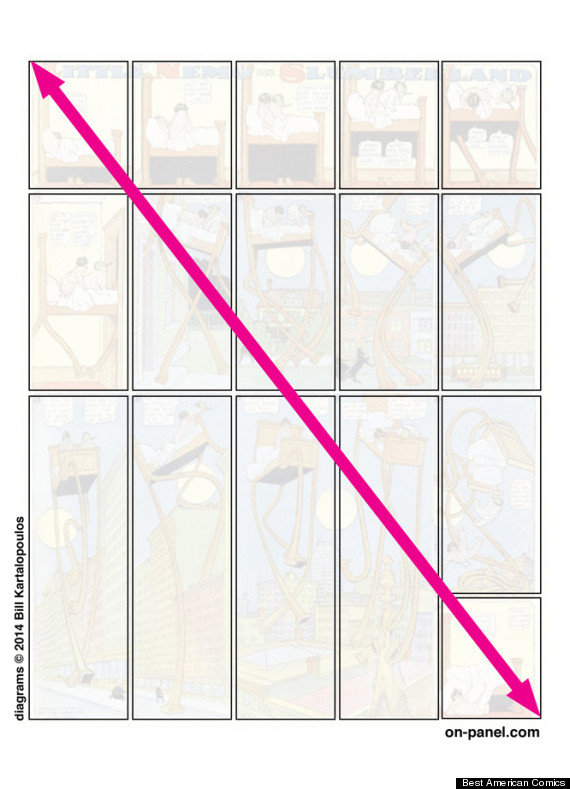 There is a built-in feedback loop at the end of this comic that takes us back to the beginning--to consider where we are and where we have been.

Robert Frost famously described poetry as the thing that gets lost in translation. It's not hard to imagine the story of Little Nemo's galloping bed adapted into full blazing CGI, and certainly much would be added. Digital texture artists would show us what kind of wood Nemo's bed is made from (oak? teak? cherry wood?); the wind would ruffle convincingly through Nemo's hair as his face registered every gradation of delight and terror (the recent cgi Peanuts trailer suggests some possibilities). But what would be lost in this translation from one form to another would be the poetics of comics: the aesthetic experience of simultaneously experiencing a comic's form and content so harmoniously that the contours of the comic's theme can be read in its architectural blueprint. 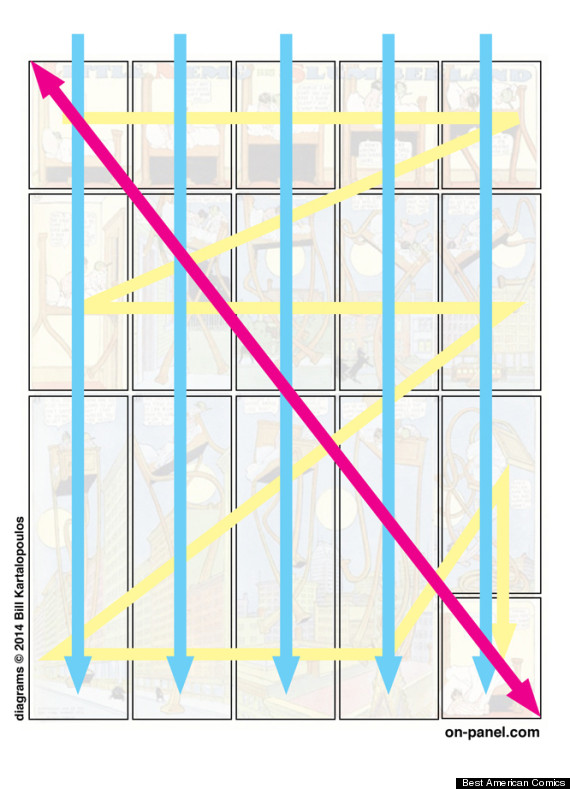 Artful comics induce a kind of double vision in the reader: we fully experience the work by understanding the relationship between the parts and the whole; between linear sequence and the simultaneous perception of related fragments. This is the medium-specific quality that make comics something more than simple storyboards, and this is the element of comics that brings us back to the internet and our endangered "deep reading" brains.

As Marshall McLuhan explained, our culture and our brains have grown accustomed to linear, typographical sequence ever since Johannes Gutenberg developed the modern printing press half a millenium ago. This typographical regime has affected the way we think, and even the ways in which we organize our culture. Now that much of the world is online, we struggle to process infinite fragments of simultaneous information offered by non-linear media. The rewards of this broader perspective -- this god's-eye view of the mediascape -- are incalculable. The internet has vastly extended our capabilities and offers revolutionary possibilities that we have barely begun to understand. But constant hyperlinking and mode-switching is exhausting, and disruptive to concentration. If anything, the internet has shown us the value of sequence and structure. It's why we enjoy websites like Storify, which extract related tweets from the chaos of Twitter, or even illustrated listicles on Buzzfeed, which recover isolated gifs from the mosaic of the internet and build them into tiny narratives. But these are stop-gap mechanisms, little binary plugs in the dam. They don't feel like a solution that can take us into the future.

For more than a century, comics have demonstrated a form of communication that marries the linear sequence of typography with the global perception of an internet-like matrix of simultaneous parts. In the Little Nemo page above, the reader returns to a non-linear point of view after reading the initial narrative sequence in order to activate the reflection and synthesis we associate with deep reading -- the thing that we fear we will lose in an online world. Great comics produce their essential meaning from the relationship between these two modes: both ways of looking and reading are needed to fully appreciate the work. Artists like Ware, Spiegelman, and Richard McGuire have extended the unique logic of comics to the book-length graphic novel. Today, many are experimenting with ways to extend key aspects of comics' form into the digital realm (even Ware is currently running comics on The Guardian's website). As we struggle within the cognitive tug of war of our new media landscape, comics offer a useful model for a new type of reading: one that might help resolve the tensions of the current media age to move us toward new productive modes of expression and understanding.

Bill Kartalopoulos is the editor of Best American Comics 2014.