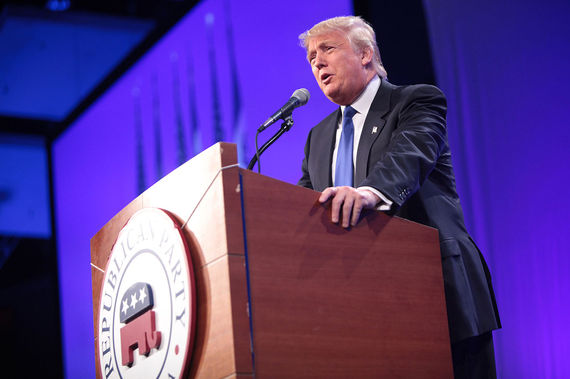 Several times this year Donald Trump has been compared to Adolf Hitler by some people in America, mainly by his political adversaries who disagree with him passionately. Professors, political commentators, irate comedians, Hollywood entertainers, and even and especially some of the leaders from our communities of color have engaged in the purposeful promotion of this comparison.*

Is this fair? Or is this simply a form of hyperbole and political demonizing? Does Donald Trump's immigration views and hatred and fear of Islamic extremism lead to the horrors of Hitler, or is this just overreaction and another misusage of the slippery slope argument? Are using emotionally charged words ("Hitler") a good way of reasoning, or simply an attempt to have a reasoner not use his reasoning abilities to see what actually are the facts? And is this all just oversimplification and manipulative name calling?

This is not a paper arguing that some of Trump's views dealing with race and immigration and religion are always wise and good, but this piece will make the argument that these beliefs that he holds concerning these issues in no way come close to approximating what one would call Hitlerism.

Why Some People Are Saying Trump Is Another Hitler

He wants a total ban on all Muslims coming into America, but only until our politicians can understand what's going on. He has changed his position to where this ban would be applied to countries with a proven history of terrorism, and he also says this would only be temporary. And he came to this view because of the increase of Muslim extremist attacks in Europe. Many people are appalled by this idea, believing it goes against what America should stand for and would also be against the Constitution. I personally think this would be terrible because of how it would put our Muslim allies in an embarrassing and more risky position in supporting us. The best ally in the Muslim world is the Muslim world. We need them, and this would make it more difficult to many of our Muslim allies in trying to support us.

He hates ISIS. He hates Muslim extremism. So do women. So does Europe. In this sense, he has a lot of American support. And he talks tough against them, saying he will bring back tougher interrogation techniques (waterboarding and even worse) and he says he will even bomb their oil fields. We have bombed damn near everything and this is hardly anything crueler, but this definitely might be counterproductive because our Muslim allies may need such oil fields if they get control of these oil fields, even though I have to admit I am not exactly sure what oil fields he is talking about, but I suspect he is talking about any oil fields ISIS finds themselves coming to control. And war is a monstrous thing, and I find it naïve whenever I hear people talk about torture as though it is somehow more horrible than dropping countless bombs on people.

He wants to build a wall along our southern border and he says Mexico is going to pay for it. A wall is not outrageous (almost all our politicians are against open borders), but it would hardly be a panacea to our immigration problems (but it could bring some real help in the long run), but Mexico is not by any stretch of the imagination going to pay for it. And we are still going to need many immigrants in the near future.

He has said Mexican illegals crossing into America are bringing drugs, crime, and are rapists, but he has also said "and some, I assume are good people." Arguing higher crime crates and drug trafficking by illegal immigrants are legitimate concerns, but saying they are "rapists" and saying "and some, I assume are good people" is a great insult. If you are a Donald Trump supporter and Hispanic even you have to say: "What the hell? You idiot, are you stupid?" This is a statement he should apologize for having ever said. And this is all weird because Trump does not have a history of being a racist to blacks or Mexicans. Before his announcement as a presidential contender, Trump was not publicly known as saying disparaging remarks against blacks and Hispanics. He has been famous and outspoken for many years and racist comments have not been his norm, although like everyone he has said things and taken stands not all blacks or Hispanics have agreed with.

He wants to enforce immigration laws and favors deporting all the millions of illegals now in America, most from Mexico. And we are talking about 11 million people! This is his cruelest and most impractical idea. Yes, you can get tough on immigration. That is not a terrible thing to do. But you definitely want to proceed with some humanity and pragmatism. He has hinted that almost all his views he has are subject to flexible suggestions. He should definitely, definitely change his position on this idea. This is a horrible idea to say and even a worse one to pursue. And good or bad, Trump has change his position on many things through the years. And here he definitely should change his position.

And he has said he wants to repeal birthright citizenship. While this sounds like an extreme position, only around 30 percent of the countries around the world actually allow birthright citizenship. We are so used to this idea it seems wrong to change it. Again, I do not see this as a cure-all to our immigration problems. I suspect this belief in birthright citizenship feels right to us because we have been raised with it. I would not change our acceptance of it because I believe it would cause more problems than it would solve, both for Americans and illegal aliens and their children born here.

He has gotten the partial support of Ku Klux Klan leader David Dukes. And this is common for anyone running for a major office to get some extreme groups that they share something in common with and then the group to decide to support this candidate. Every major presidential contender has gotten the support from organizations and persons they do not agree with and do not associate themselves with.

He has not agreed with many people of color about what is causing the high crime in minority communities, how it is higher than they like to admit, and how he believes this high crime rate is the principle reason why blacks have more deaths by police. These are very legitimate positions and in no way makes him a racist or unconcerned with the black and Latino communities.

He has been accused of fear mongering and megalomania, and causing ethnic and racial tensions to rise.

And do these beliefs and acts of his (Muslim banning, building a wall between America and Mexico, insulting Hispanic immigrants, deporting illegal immigrants, denying citizenship to even those legally born here, and holding opinions contrary to people of color) warrant the idea that Donald Trump is going to be another Hitler? Is this enough evidence to conclude Donald Trump is taking us down the road that Hitler took us and actually is another Hitler?

Yet before we make our final decision on whether Trump is another Hitler let us remember what we are talking about.

And this was all planned and purposeful!

Trump Is Not Another Hitler

There is no proof that Trump exists to begin World War III, wants to exterminate Mexicans, has hinted, suggested, or implied he desires the slaughter of millions of people of color in America. He has never displayed a hint of wanting to create a ruthless and totalitarian government. He believes in democracy, free speech, respect for the law, and has no belief in wanting to bring about any atrocities similar to Hitler. He is not a fascist. He has shown nothing comparable in speech or act to what is Adolf Hitlerism. And anyone who says he is another Hitler is embarrassingly ignorant of history, making outlandish comparisons, politically motivated to distorting the truth, and has not studied Adolf Hitler and what his views were and what he actually did.

*Recently, I discovered how in late February of this year Fresno State's student-run newspaper the Collegian ran a front-page editorial comparing Trump to Hitler. Its title was: "Donald Trump is going to get us all killed." It began with the words: "Trump's America is the Fourth Reich." It also had a photo of Trump's head on Hitler as Hitler was giving the Nazi salute. It also said: "Trump represents the rise of a new Hitler and is capable of the same atrocities." This story made national headlines, embarrassing Fresno State, which very quickly and wisely distanced itself from the story by explaining how it has no control over what the Collegian prints and how this publication is not the voice of Fresno State. I took this story very personally, having graduated from Fresno State in the late 1980s with a degree in political science. The only thing almost as embarrassing was when in 2014 it made the national press when a student from Fresno State was arrested for having sex with a sheep in the school's agricultural barn. And this editorial comparing Trump to Hitler showed an extreme lack of journalistic standards. Hopefully, the Collegian will do better in the future, which I believe it will. And to the editor-in-chief who ran this editorial, learn from your mistakes and improve. We all make mistakes and can get better. I should know, I am always still making them and still trying to learn from them.