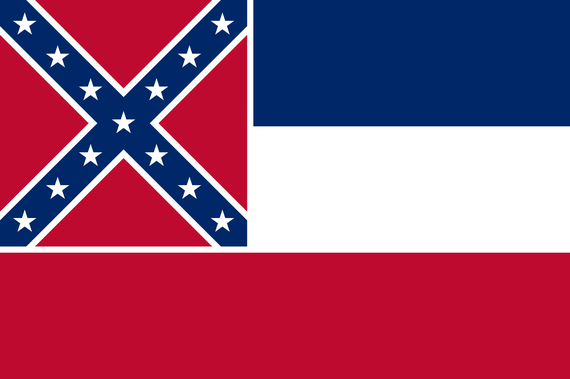 This just in. The Civil War is over! Done. Finished. The whole thing was settled at Appomattox Court House in 1865. On that day, the Union was preserved and those who wanted to preserve slavery were defeated. After the war, Robert E. Lee said, "I think it wisest not to keep open the sores of war, but to follow the example of those nations who endeavored to obliterate the marks of civil strife, and to commit to oblivion the feelings it engendered." The man who led the South's military campaigns thought it best to move forward and no longer remember what tore the country apart. Jefferson Davis, former President of the Confederate States of America, concurred, "My pride is that that flag shall not set between contending brothers; and that, when it shall no longer be the common flag of the country, it shall be folded up and laid away like a vesture no longer used." The President of the country that fought for a losing cause understood what his defeat meant and wanted the country to finally unite.

February is Black History Month - an annual celebration of achievements by black Americans and recognizing the central role of African Americans in U.S. history. In 1976, President Gerald R. Ford officially recognized Black History Month, calling upon the public to "seize the opportunity to honor the too-often neglected accomplishments of black Americans in every area of endeavor throughout our history." Let me reiterate - it is a time to honor the positive accomplishments of fellow Americans.

So, why am I bringing this up? As we close out Black History Month, the news emerged that Governor Phil Bryant of Mississippi signed into law Confederate Heritage Month. The proclamation explains how it is important to recognize "our" past. I suppose the State of Mississippi thought that this was the most urgent concern facing their state, despite the cacophony of problems of which they otherwise face. The political and military leaders of the ACTUAL Civil War did not think it necessary to continue the fight after they suffered defeat, but for whatever reason, there seems to be a need to perpetuate a fight today that was lost long ago. One hundred fifty-one years is a long time to brood over a loss. To my knowledge, America does not have a Red Coats Heritage Month nor do we opine for a German American Bund History Month. But, I digress. Instead of writing a post that is a diatribe about the how asinine Confederate Heritage Month is, let's examine what this decision means for Mississippi from a business perspective.

Bad Business
Whether they admit it or not, every state in the Union is a business. Each state has a budget, expenses and hopefully they're working to be in the black. The primary objective of every business is to attract consumers in an effort to increase the bottom line. We've all seen the commercials enticing couples, families, and wine and beach lovers to visit Virginia, Michigan, and California - these states are focused on increasing tourism, and thereby increasing state funds.

The Bureau of Labor Statistics noted that Mississippi has an unemployment rank of 6.8% - the highest in the nation. In other words, of all the states in the Union, Mississippi does the worst at attracting businesses and fostering an environment where people can flourish - both of which ultimately lead to putting Mississippians to work. The state's 6.8% unemployment is well above the national average which sits at 5%.

Education Week's annual Quality Counts report, which focuses on improvements in our nation's schools and provides a report card on the state of education for the nation and the states, ranked Mississippi 49th out of all 50 states. I think it's fair to say that the public schools in Mississippi leave much to be desired.

With the myriad of problems engulfing the State of Mississippi, one would think that Governor Bryant and state legislators would be focused on the aforementioned issues, instead of deciding to take on the pressing issue of Confederate Heritage, which only serves to distract the good people of Mississippi from the lack of leadership in place to handle the real issues facing the state.

Business 101 teaches the CEO to deal with long term systemic problems FIRST. Unemployment, poor education and poor health seems, to this observer, to fit that bill. Business 101 also teaches the CEO not to alienate their customer base. Why would any tourist want to see the sights of Mississippi or visit their beaches when their state government chooses to writhe in a war long ago fought? From an academic standpoint, the decision by Mississippi's leadership fails the test of basic business at best, and at worst it calls into question Governor Bryant's capacity to prioritize his citizen's needs.

Financial Impact
Based on the litany of problems facing the State of Mississippi, Jay Z would have to rename his song from 99 Problems to Too Many Problems in Mississippi. One would think that Governor Bryant would use the power of his office to address the real problems in his state; however, as chronicled, the leadership of the state has decided to go in another direction. So, what does Mississippi lose? The business term that the State of Mississippi will soon experience is called an expected loss. In other words, they can expect to lose an undetermined amount of income that might have otherwise come to their state treasury by engaging in ideas that most Americans don't approve of.

Let's look at Mississippi's potential loss through the lens of South Carolina, and what they are now gaining due to the change on their position of hoisting the Confederate flag on state grounds.

Previously, the NCAA boycotted South Carolina, ultimately banning the state from hosting NCAA tournaments. The NAACP also advocated a boycott of the state. Soon after these boycotts were in place, South Carolina developed a stigma and suffered not only in the court of public opinion, but also from a lack of much needed revenue. The business opportunities that the state lost is incalculable; however, since Governor Nikki Haley took a leadership role and led the fight to remove the Confederate flag, businesses are now considering operations in South Carolina, thereby giving the state a chance to increase revenue. The NCAA has lifted its ban, which means March Madness and other collegiate sports' tournament rounds may now be hosted in South Carolina - additional opportunities for the state to generate revenue. The image of South Carolina is improving due in large part to the leadership of their Governor. Mississippi's Governor on the other hand seems to be doubling down on a war that was decided in 1865.