To date, much of the debate over climate change and our energy independence has been limited to the halls of Congress and Sunday morning talk shows. But according to an array of our nation's most distinguished military and security experts, climate change in the years and decades ahead could place an additional burden on our armed forces and increase international instability.

What we know about the global impacts of climate change and our energy use has grown by leaps and bounds over the past two decades. One example comes from the National Intelligence Council (NIC), one of our government's primary agencies to craft and coordinate appraisals of foreign threats and trends, drawing upon the best information and analysis from across various federal agencies. In 2008, the council completed its first ever assessment of the security implications of climate change. The findings are quite sobering.

In a 2008 special congressional hearing, Dr. Thomas Finger, then-chairman of the council, cautioned that international instability fueled by global warming could "threaten domestic stability in some [nations], potentially contributing to intra- or... interstate conflict." He further stressed this situation could "significantly tax U.S. military transportation and support force structures, resulting in a strained readiness posture and decreased strategic depth for combat operations." The NIC isn't alone in its concern about the impacts to our national security.

The CNA Corporation, formerly known as the Center for Naval Analyses, warned in a groundbreaking 2007 report that "climate change, national security, and energy dependence are a related set of global challenges." And this February, the Department of Defense for the first time ever included the threat of climate change in its Quadrennial Defense Review Report —a key document that serves as the military's strategic roadmap over the next four years. 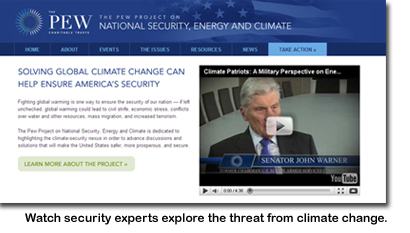 Indeed, the Defense Department has already initiated a number of innovative programs to reduce its energy and carbon boot-print in response to this gathering threat. One of the largest energy consumers in the world, in 2007 the department reduced its usage by over 10 percent from its 2003 baseline. And the department continues to work on numerous programs and solutions, from operational effectiveness and energy management initiatives to renewable energy investments and improving the electric grid. However, in the struggle against climate change these efforts will not be enough.

As one of the few institutions with the manpower and infrastructure to quickly respond to crises around the globe, U.S. armed forces will be on the front lines combating many of the complex humanitarian emergencies of tomorrow. And though many of these crises lie beyond the control or foresight of America's civilian and military leaders, the security risks associated with current energy usage patterns and our nation's carbon emissions are areas where we have some determination over our fate.

If future generations are to have a fighting chance to avert the worst global warming impacts, we must enact binding limits on our nation's carbon emissions. With less than 5 percent of the world's population, the United States is responsible for more than 20 percent of the pollution that is accelerating climate change. To assume our fair share in preventing adverse impacts, we need Congress to step in line with the leadership of the armed forces, and enact federal comprehensive climate and energy legislation now.

We must summon the political willpower in order to reduce global warming pollution, lead the world in the advancement of clean energy, lessen our dependence on foreign oil and secure America's safety and prosperity. In the years and decades ahead, the men and women of our armed forces shouldn't have to shoulder additional missions because of congressional failure to reduce global warming's threat to international security.