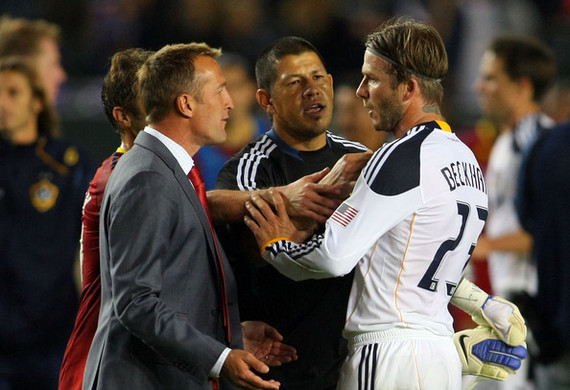 Today we create a mind-boggling 2.5 exabytes of data daily, with tools to simplify it all to smarten us. But given this 24/7 access to infinite information, why do most people still think success is all about being the smartest person in the room? You're meant for so much more.

Years ago, I worked at a newspaper during a financial downturn. I was unsure about the future in a fading industry, with a boss who told me to work "as if I had a gun to my head." This wasn't what I had prepared my whole life for. For my first 20-something years I had been groomed to take on the world as a "mover and shaker." But I found myself suddenly out of a job and light years away from my potential.

I thought if I worked "harder and smarter" than the next guy, things would work out. Now I had to admit to myself my success formula was flawed. If working harder and smarter wasn't enough, then what was? I started searching for answers with a Brazilian and a pair of Albanians, launching a network to empower people to lead, rather than lose to, the largest trends of the 21st century. We interviewed 300 CEOs, inventors, artists, and change agents in every field. What we found may surprise you. It surprised us.

Here's the big idea: It's no longer about only working harder and smarter. The days of the Knowledge Worker and Information Age are over, and the days of the Connection Worker and Integration Age have begun. Now it's about working more creatively with everyone -- connecting more.

How do we know? In January of 2011, engineers at IBM fused parts together in a Frankenstenian frenzy to unseat Ken Jennings, the Jeopardy! all-time winner. Their supercomputer, dubbed "Watson," would need to share near-infinite trivia answers in milliseconds and in the form of a question to keep Alex Trebek smiling.

But Jennings was confident he'd win against Watson, having practically put the "Knowledge" in Knowledge Worker. His Jedi-level training had led to his break on Jeopardy! , crushing opponents for 74 straight games, and taking home $2.5 million. This was no ordinary human, and Watson should rightly beware.

On that fateful day, Jennings stood in IBM's auditorium next to Watson as programmers pumped their fists in the stands. Jennings was wary but unfazed:

"I expected Watson's bag of cognitive tricks to be fairly shallow, but I felt an uneasy sense of familiarity as its programmers briefed us before the big match: The computer's techniques for unraveling Jeopardy! clues sounded just like mine. That machine zeroes in on key words in a clue, then combs its memory (in Watson's case, a 15-terabyte data bank of human knowledge) for clusters of associations with those words. It rigorously checks the top hits against all the contextual information it can muster: the category name; the kind of answer being sought; the time, place, and gender hinted at in the clue; and so on. And when it feels "sure" enough, it decides to buzz. This is all an instant, intuitive process for a human Jeopardy! player, but I felt convinced that under the hood my brain was doing more or less the same thing.

"I made up ground against Watson by finding the first "Daily Double" clue, and began furiously hunting for the second one, which was my only hope for catching Watson. By process of elimination, I became convinced it was hiding in the "Legal E's" category, and, given a 50-50 chance between clues, chose the $1200 one. No dice. Watson took control of the board and chose "Legal E's" for $1600. There was the Daily Double. Game over for humanity...."
("My Puny Brain", Ken Jennings, Slate, 2/16/11, italics added)

Once upon a time, we could expect to grow up, graduate from college, apply our newfound knowledge, and collect paychecks forever. But those days are gone. Knowledge is a commodity. It's no longer about knowing more. It's about connecting more. Here's how:
- Connect with an inspiring vision. Ponder, explore, and focus on what inspires most.
- Connect creatively with others. Inspire others by engaging in selfless and powerful ways.
- Connect others with success. Empower others to be successful, and they will love you for it.

What does a Connection Worker look like? In October 2011, David Beckham got into an unexpected dust up. Beckham had led the L.A. Galaxy against Real Salt Lake and was now nearly in a fistfight with the opposing coach, Jason Kries. Beckham had approached Kreis to share his frustrations about an inept ref, but Kreis wasn't interested in engaging an opposing player, especially one who values his name more than the game. To Kreis, Beckham was the ultimate anathema: the guy who's only in it for himself.

For years, Kreis had preached to his players the power of selflessness. In a world where the Beckhams earn the most coin, get the paparazzi, and marry the Spice Girl, this might seem old-fashioned. But Kreis has made the conventional unconventional. In 2009, he started what most deemed the impossible dream: to make Real Salt Lake into more than a joke. Kreis believed success depended on connection -- to his heart, to his players, and to the game. Hired as the youngest coach in history at age 34, Kreis leveraged his inexperience as a strength. He called top coaches, praised them, explained his mission, invited them to dinner, and picked their brains.

Next, Kreis built his team. While most coaches rely on scouts to bring in recruits, he insisted on meeting potential talent in person. And Kreis didn't want Rock Stars like Beckham. He wasn't interested in the player who'd light up the field only to bask in his own glory. No, Kreis wanted the opposite -- guys who loved the game and would give everything for the team to be successful.

What happened next was nothing short of miraculous. Kreis converted Real Salt Lake from a struggling franchise into a selfless force that overwhelmed opponents. In the 2009 MLS Cup, Real Salt Lake went head to head with Beckham and the Galaxy and beat them soundly. What could have possibly resulted in the embarrassment of the great Beckham? Kreis. And he did it by connecting more. ("Real Salt Lake's Kreis Deserves Coach of the Year for Team-First Mantra, Gordon Monson, Salt Lake Tribune, 11/6/11)

Today, don't focus as much on knowing. Focus on connecting.