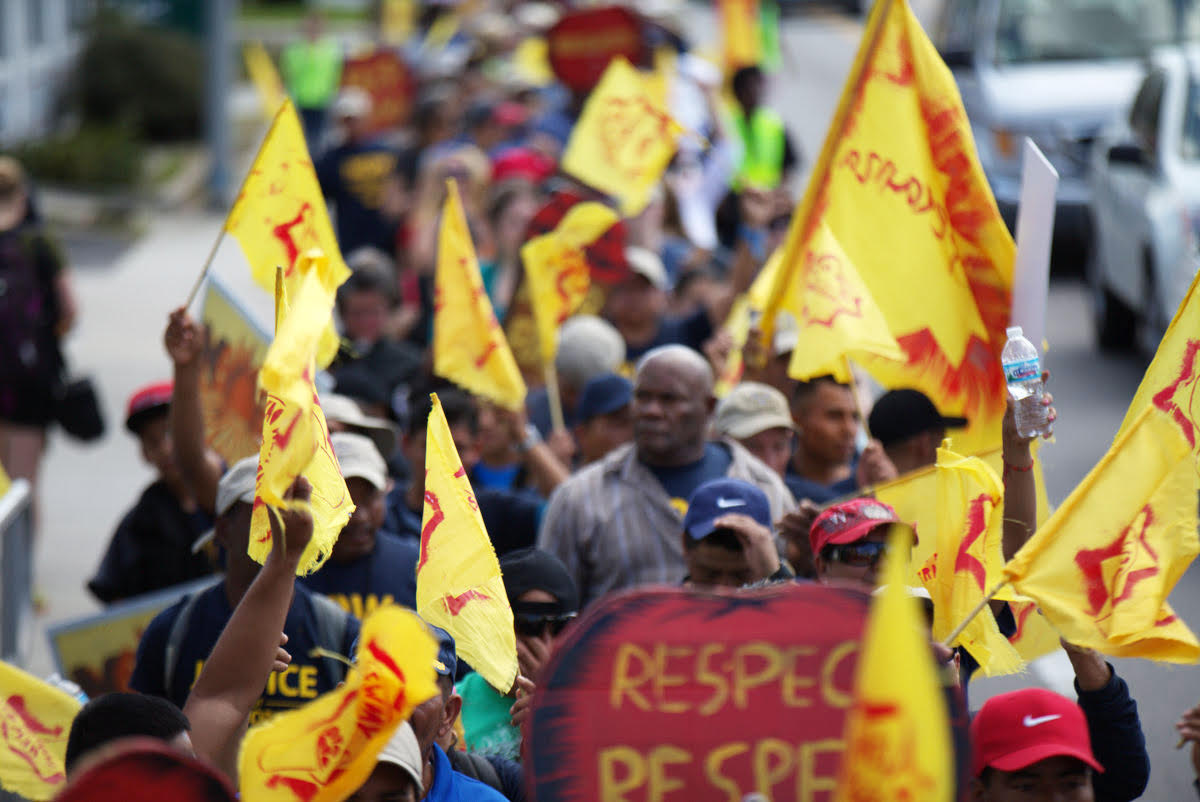 In March of 2002, Irvine California saw its first public protest. Ever. Long before you could see anything at Taco Bell headquarters, you could hear something coming. People going about their daily routine stopped and inclined to listen. It sounded at first like a strange, far-off buzzing, then a rumble that gradually crescendoed to the beat of thousands of feet marching. Under the blazing Southern California sun, a thin ripple of color began to rise across the horizon where the street meets the sky as a great river of humanity began to take shape in the distance. Now you could hear them chanting, "Boycott Taco Bell" as they surged forward toward the company's headquarters more than 2,000 strong, consumers and farmworkers together, banners soaring, cries for justice reverberating in the air. The power and hope was palpable. It was an exhilarating moment. But it was more than that. It was the dawn of a new strategy for worker rights protection.

The Taco Bell boycott was the seminal battle in the Coalition of Immokalee Workers' (CIW) Campaign for Fair Food. Through the campaign, tomato pickers from the dirt-poor town of Immokalee, Florida, joined forces with consumers in a national alliance to demand real, measurable supply chain accountability from some of the world's largest retail food corporations.

Today, 14 of these corporations have signed binding agreements with the CIW, and the Fair Food Program has eliminated many longstanding human rights abuses, including forced labor, and increased wages for tens of thousands of tomato workers from Florida to New Jersey.

U.S. farmworkers and their activist allies are not alone in using consumer pressure to compel giant retailers to accept fundamental change in their supply chains or in their franchises. US fast-food workers appear to be reaching the tipping point in the Fight for 15 with their own employers, thanks in large part to their successful outreach to consumers across the country.

Meanwhile, workers and consumers have achieved a breakthrough in the battle for safe and decent conditions in the garment factories of Bangladesh, where more than three million workers sew clothes, for 31 cents an hour, to supply American and European brands and retailers. The horrific Rana Plaza factory collapse, which took the lives of more than a thousand workers in April of 2013, was the worst such disaster in Bangladesh, but it was not the first. After every prior disaster -- like the seven different fires and building collapses in 2005 and 2006 that collectively killed more than 200 people -- the global corporations that use these factories promised to clean up the industry, but then failed to keep their promises. 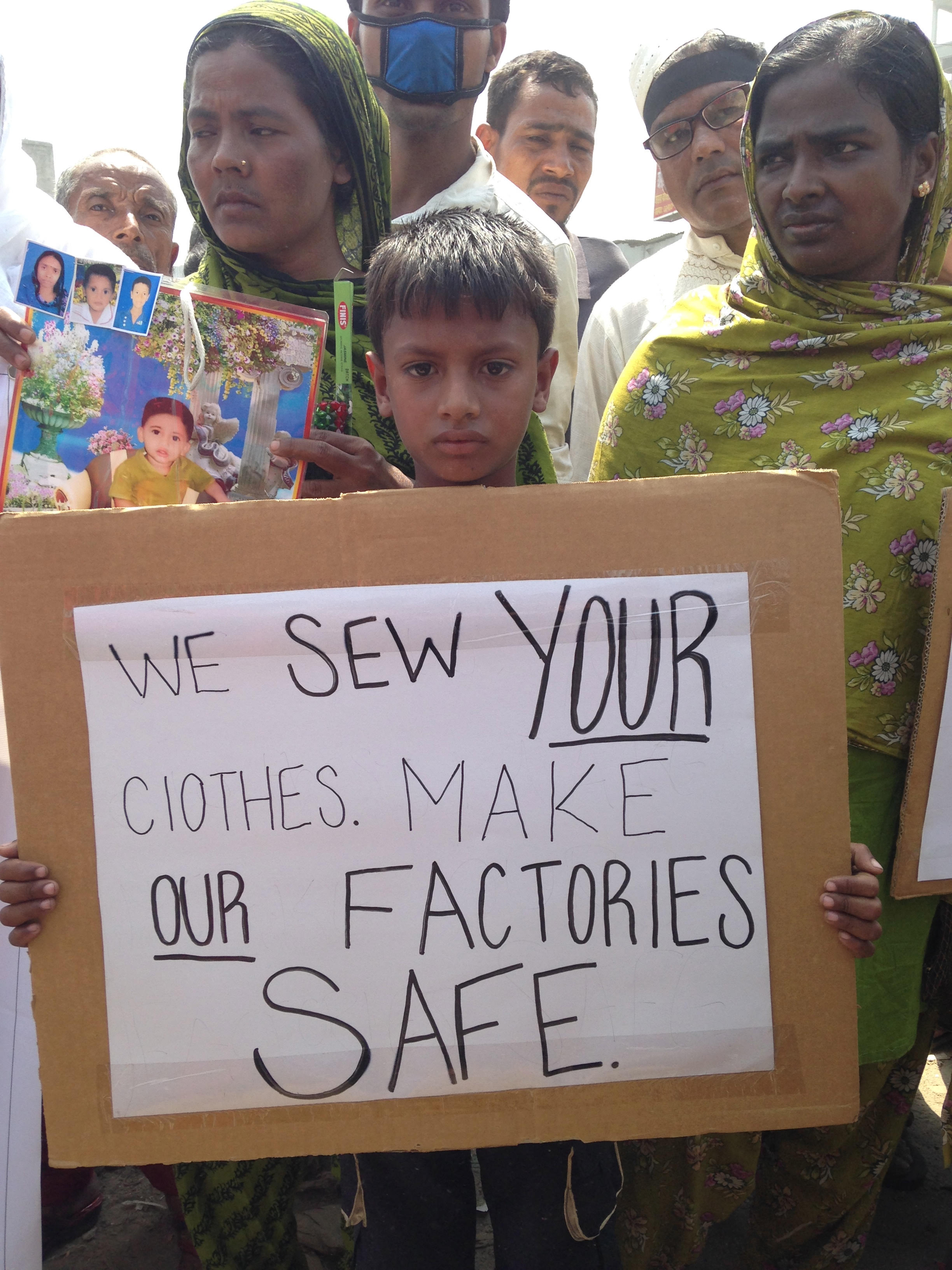 The young son of a Dhaka garment worker calls on Western brands and retailers to implement safety reforms in their Bangladesh factories. Consumers worldwide pushed to make it happen. Credit: Worker Rights Consortium

The aftermath of Rana Plaza was different. For three years prior to the Rana collapse, Bangladeshi labor unions and their allies in student, worker and community organizations across North American and Europe, had been organizing in support of a bold solution to the worker safety crisis: compel brands and retailers to sign a binding, enforceable safety agreement with worker representatives. With world attention riveted on the garment industry's labor practices in the wake of the collapse, the brands' and retailers' argument that they should be trusted to regulate themselves collapsed as well. And in May of 2013, less than a month after the disaster, many of the world's leading apparel companies joined global and Bangladeshi labor unions in signing the Accord on Fire and Building Safety in Bangladesh. The agreement requires them to open their factories to independent inspectors, aid the factory owners financially so they can afford desperately needed safety renovations, and stop doing business with any supplier that refuses to bring its factory building up to code.

Partnering consumer power with worker-designed solutions to protect their own human rights is a 21 century strategy for transforming supply chains. And it's winning.

That's why Michael Hobbes' article The Myth of the Ethical Shopper, published by the Huffington Post as part of its new Highline series, left us cold. Hobbes clearly wants to end worker exploitation in supply chains and he is rightly impatient with corporate-controlled efforts to curb abuses that haven't worked. But Hobbes is wrong -- and sends the wrong message to readers looking for ways to ensure more humane labor conditions for the workers who produce the electronics, clothes, and food they buy -- when he calls consumer action for supply chain accountability "bullshit."

Hobbes' analysis exculpates the corporations that make billions of dollars selling products made by workers enduring exploitation and abuse. Rather than hold those companies accountable, he casts them as the helpless victims of forces beyond their control. He puts the blame instead on everyone in the supply chain but the corporate behemoths that actually hold the power. He blames suppliers for weaving impenetrable webs of subcontracting arrangements that frustrate the brands' supposedly earnest auditing efforts; he blames voracious consumers and their constantly shifting tastes for ostensibly forcing brands to deliver everything cheap and fast; he even blames human rights activists for making what he considers unrealistic demands for accountability.

As Hobbes looks more closely at apparel supply chains, he only deepens his misdiagnosis of the problem. He correctly points out that the factory inspection programs corporations created in response to consumer pressure in the 90s "are not designed to make factories take better care of their workers. They're designed to make factories look like they are." Yet he finds no fault with the brands and retailers that substituted public relations schemes for genuine inspections and refused to partner with workers to truly eradicate human rights violations. Instead, Hobbes blames the activists for demanding change in the first place. 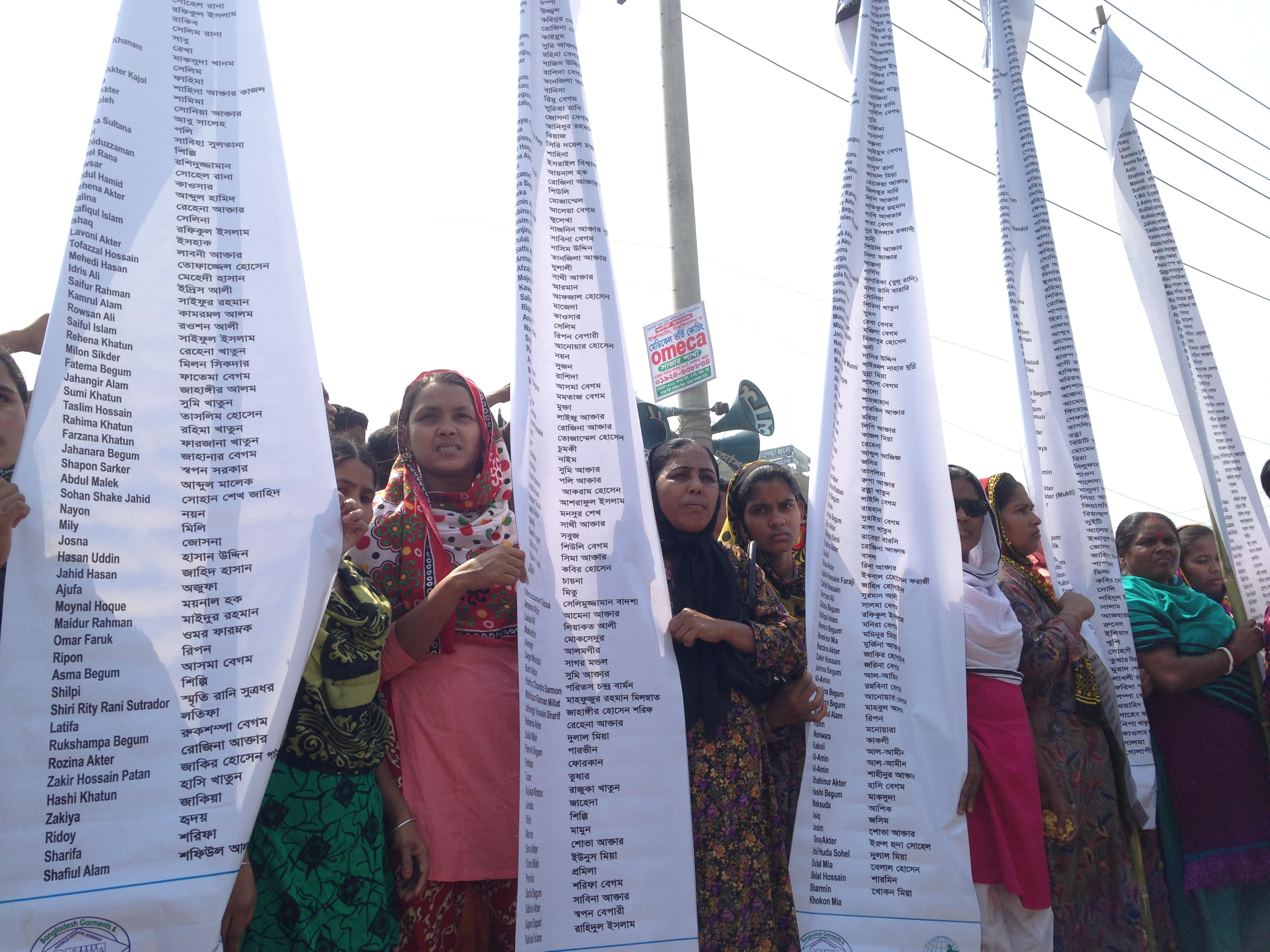 On the first anniversary of the Rana Plaza building collapse, family members and friends hold banners displaying the names of victims who were killed in the disaster. Credit: Worker Rights Consortium

For workers experiencing human rights violations, "corporate social responsibility" or "CSR" has been little more than a cruel mirage. Too many brands and retailers have used CSR to persuade consumers that abuses are being eliminated, while the abuses, in fact, continue unabated. Factories without fire exits that burn and kill dozens of workers in minutes, forced labor rings that systematically steal both workers' wages and their dignity, factories that regularly flout labor laws so they can give brands and retailers the cheap goods they demand - all persist in workplaces purportedly protected by corporations' CSR programs. That's why over the last 10 years farmworkers and garment workers have been perfecting their own solutions for defending their rights in corporate supply chains by harnessing the market power of corporations toward that end. The results have been the Fair Food Program and Bangladesh Accord on Fire and Building Safety, both leaders in the new field of Worker-driven Social Responsibility (WSR).

Unlike traditional CSR, third-party audits by the Fair Food Standards Council are unique in their scope and depth. 50-100 percent of the workforce is interviewed on and off the worksite and inspections of growers in the Fair Food Program can take up to two weeks. Credit: Smriti Keshari

In stark contrast to CSR, the WSR model involves workers at every level of design and monitoring of programs to ensure their rights while industry-specific, rigorous third-party inspections and corrective action plans ensure gains. It's how specific, critical workplace changes, like the Fair Food Program's ban on the forced overfilling of picking buckets (long a source of systematic wage theft in Florida's fields), get standardized and implemented. 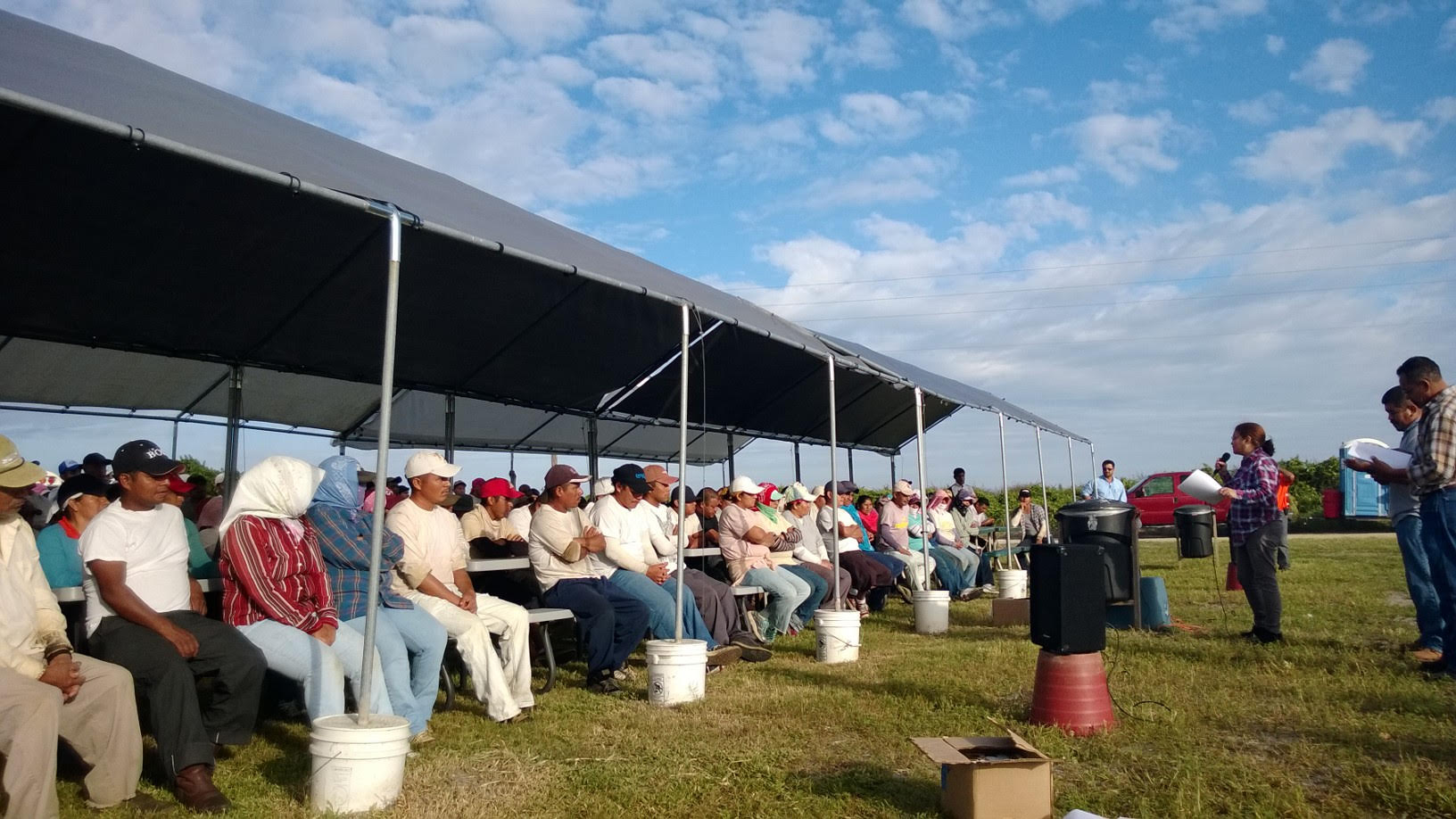 Worker-to-worker education on the farm, on company time, ensures farmworkers know their rights and how to protect those rights, a core principle of Worker-driven Social Responsibility. More than 100,000 workers have been trained in the Fair Food Program. Credit: Coalition of Immokalee Workers

The WSR model harnesses the power of corporations by bringing them into legally binding agreements that condition their purchasing on their suppliers' compliance with labor rights standards. Brands must reward suppliers that uphold the standards with guaranteed sales and must suspend suppliers that don't. Workers' rights advances are not just promised, but actually achieved in the WSR model, because suppliers, workers and consumers know corporations are obligated to stand behind these changes. 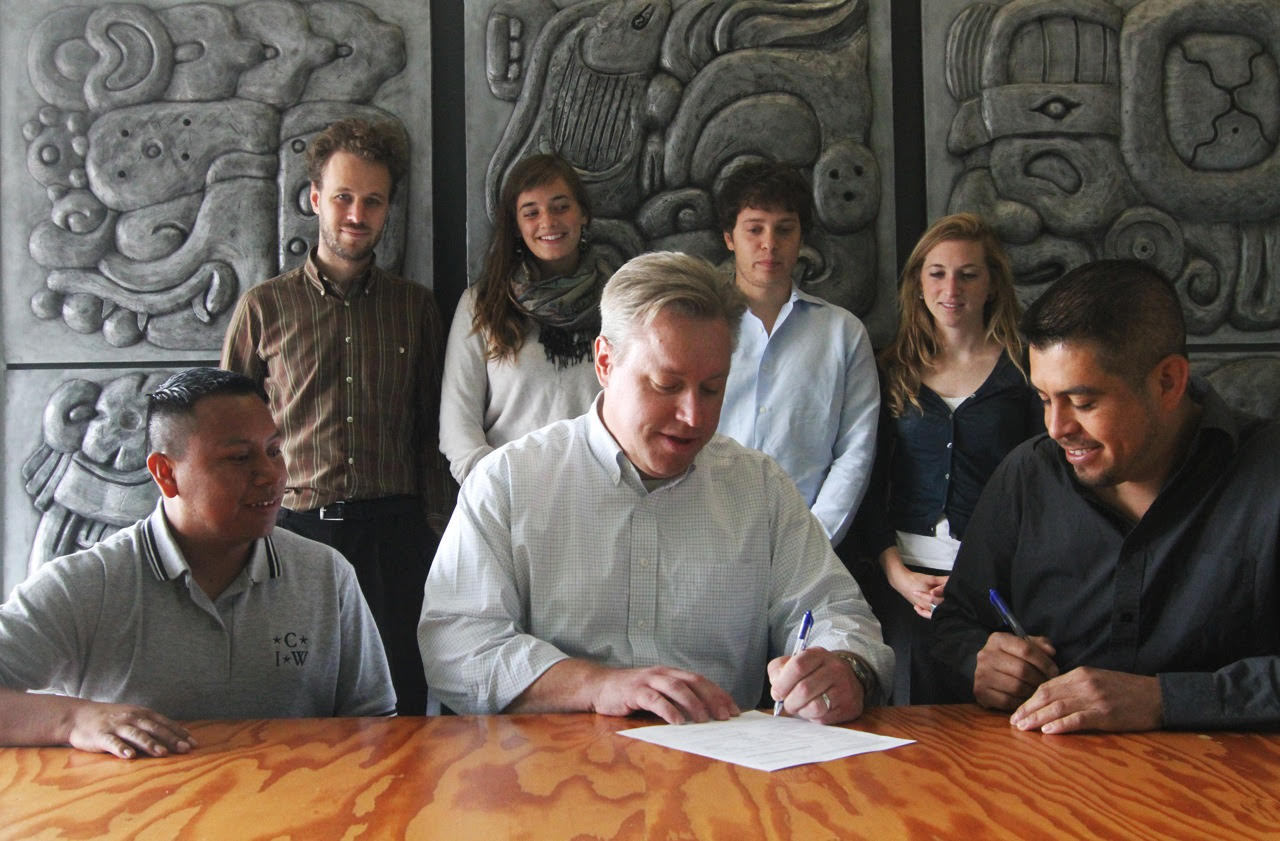 The CIW's Oscar Otzoy, Chipotle's Chris Arnold, and the CIW's Gerardo Reyes, joined in the background by student and faith allies, at the October 2012 signing ceremony at Chipotle's Denver headquarters. Credit: Coalition of Immokalee Workers.

The WSR approach is rooted in simple market economics. In the food industry, for example, increasingly consolidated retail food giants have squeezed their produce suppliers' profits and driven the impoverishment of farmworkers for generations with their demand for ever lower prices. The CIW's Fair Food Program, launched in 2011 and today boasting agreements with companies from McDonald's to Whole Foods, has reversed that process, leveraging the corporations' buying power to improve, rather than impoverish, workers' lives.

Apparel brands, like their counterparts in the food industry, routinely pay suppliers prices so low that they can only meet the price by cutting corners on worker rights and safety. That is why the Accord requires brands to pay for the costly safety renovations that factories cannot afford on their own. The Accord, which redeploys the strength of more than 200 global corporations -- from Abercrombie & Fitch, to H&M, to Zara -- to end dangerous working conditions, demonstrates that, despite Hobbes' claims to the contrary, corporations do have the power to clean up their supply chains.

There is clearly much ground yet to cover as WSR moves into more industries in different countries. Even so, as we converse with workers' organizations, grassroots groups and governments from Morocco to Colombia, the hunger for this model is real and the hope is palpable. Because it's working.

While Hobbes shakes his head at consumer activism, many workers are counting on on ordinary consumers -- you and people like you around the world -- who, when provided the opportunity to lend your weight to the advancement of workers' rights, will do so. 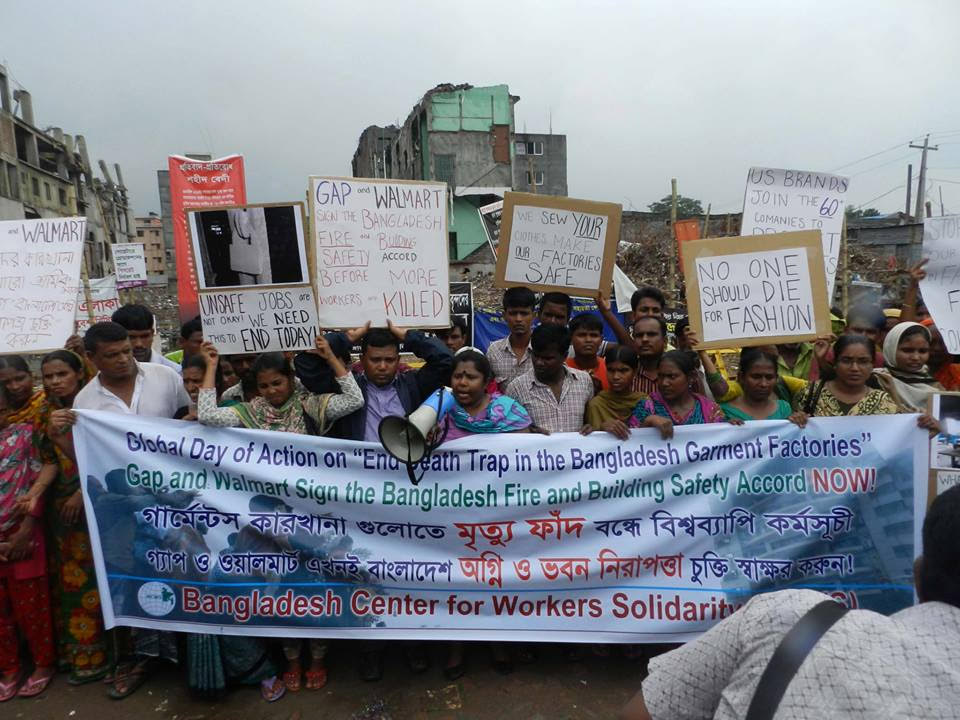 BGD Protest against Gap and Walmart -- Garment workers and advocates in Dhaka call on Gap and Walmart to sign the Accord on Fire and Building Safety in Bangladesh. Credit: Bangladesh Center for Worker Solidarity

Co-founder of the Coalition of Immokalee Workers