Innovation is an interesting concept. For many people it presupposes an "aha" or "eureka" moment in order for something new to have been created.

Others (wrongly) pronounce that innovation is a behaviour selectively developed and held by mainstream media stars such as Steve Jobs, Richard Branson or Mark Zuckerberg.

"They're so innovative," you read over and over again as if there was not a team of learned brains surrounding them to assist their final and often collaborative efforts. Of course there was the innovation disruption (eruption, one might argue) sparring match between Clayton Christensen and Jill Lepore in the summer of 2014 that proved the debate is far from being settled.

I've always been intrigued by the concept of innovation. Perhaps, in part, it is due to my personal fascination with Thomas Edison.

Now there was an innovator. His list of inventions was as long as the river Nile. Interestingly, if this electromechanician - what Edison was originally called - were alive today he would be the first to tell you his inventions were a team effort, not anything singular and certainly the polar opposite of any eureka-like moment.

Edison's Newark, New Jersey, Menlo Park working lab in the 1870s and 1880s reflected his appreciation for different-minded individuals working collaboratively on new, inventive technologies. His team of inventors was a working lab of innovation, building upon previous learning and past experiences.

Henry Ford -- famed creator of the Model T car -- further debunked the fallacies of the single inventor or the "eureka" moment. He once said:

I invented nothing new. I simply assembled into a car the discoveries of other men behind whom were centuries of work. Had I worked 50 or 10 or even five years before, I would have failed. So it is with every new thing. Progress happens when all the factors that make for it are ready, and then it's inevitable. To teach that a comparatively few men are responsible for the greatest forward steps of mankind is the worst kind of nonsense.

Innovation, therefore, is the origination of one from many. 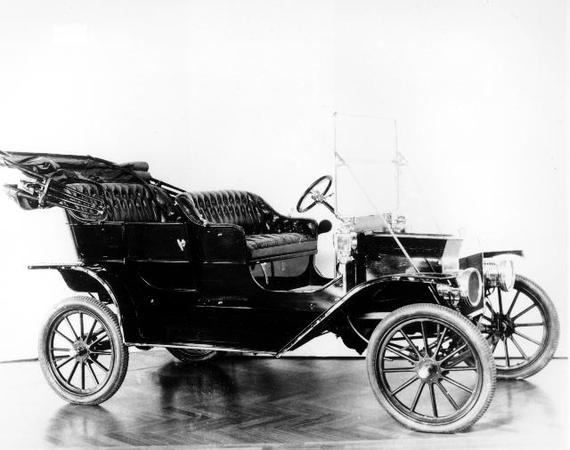 I ask now whether you believe higher education is any different. In particular, when corporations seek to use higher education to assist in the development of their employees, why is it that the way in which learning is developed and delivered by the university has remained the same since the days of Taylor and Sloan?

Why is an innovative and collaborative partnership model between higher education and corporations not becoming the norm for any sort of learning opportunity? Specifically, the potential for the "Corporate MBA" should not be thought of as negative. It should become an innovative norm, a collaborative working partnership.

According to Global Silicon Valley Advisors, a U.S. education consultancy, worldwide corporate and government spending on various forms of external learning and education is set to reach $449 billion this year and $524 billion in 2018.

With organizations spending millions each year sending employees to higher-education learning (including MBA programs) where the curriculum is independently designed by just a few faculty (and their myopic research tendencies) inside one institution's higher education firewall, does this equate to innovation or is it merely the wretched status quo of "this is how we've always done it?"

Indeed, the status quo lurks. In the May 2005 issue of Harvard Business Review, Warren Bennis and James O'Toole referred to the predicament of business schools and their lack of innovation by suggesting they were drawn to the vortex of "the scientific model." It was a warning.

It is clear to me a decade later that their call has been mostly unanswered. Business is not an academic discipline; rather it is a profession like law and medicine. As Bennis and O'Toole write:

The distinction between a profession and an academic discipline is crucial. In our view, no curricular reforms will work until the scientific model is replaced by a more appropriate model rooted in the special requirements of a profession.

I am not referring to the concept of "tailoring the curriculum" or "customizing the content" either, where business school administrators replace corporate logos on PowerPoint slides and paper printouts of common curricula. Might the university learn from the sponsoring organization through its own business experiences and ideas? Might this involvement create a more innovative and successful program?

Another question to contemplate is whether the employee -- who is being financially sponsored by the organization -- will improve his or her own personal performance if the learning outcomes are misaligned to the mission, objectives and values of the paying organization.

If an organization, for example, decides to invest $2 million in its future leaders by enrolling a cohort of employees into a public MBA program at a business school, should said organization be held to the singular innovation and ideas of faculty members from that one university through their "scientific model" tendencies or aim to add value themselves?

Perhaps it might be appropriate for corporations to invest the time -- and more importantly, their innovative and experienced minds -- into the co-development of a higher-education program. Could this allow both institutions to to metaphorically replicate Edison's working lab of collaboration, ideas and innovation to achieve Bennis and O'Toole's moon shot of establishing the "business model" in business schools?

It is time universities and corporations got together and created their own Menlo Park of higher-education innovation, collaborating with one another to craft something very special for both parties. It is time for a new definition of eureka.

In the spring of 2014, Starbucks announced with great fanfare it was scrapping its existing employee tuition reimbursement program in favour of an exclusive partnership with Arizona State University.

Open to any of its 135,000 "partners" who work at least 20 hours per week, including part-timers, Starbucks offered to pay for a bachelor's degree. Fantastic, many claimed, though employees had to earn 21 credits from ASU's online programs first (and pay themselves) before reimbursement would happen toward the other 99 credits required for graduation.

What worried me most, however, was that the investment was allegedly being made by Starbucks without involvement by the company on how the degrees might benefit the organization, employees and the university itself in the long run.

Yes, it is an excellent example of corporate citizenship and a demonstrable illustration of improving employee engagement and the lives of its employees. The question remains whether Starbucks, ASU and employees missed an opportunity to build an innovative Edison-esque working lab to provide a truly innovative (and successful) higher-education program.

I happen to work at TELUS, a global telecommunications company headquartered in Vancouver, Canada, with $12 billion in revenues and millions of customer connections. Like countless other corporations worldwide, we are proud of the investment we make in our team members.

Since 2010, for example, TELUS has invested well over $200 million in various learning and development efforts for the 45,000-plus team members that are a part of our organization. When we work with external education partners, one of our steadfast rules of engagement is that the partnering educational institution must become immersed in our mission, objectives and leadership values.

In simpler terms, the education institution becomes one of us ... not the other way around. TELUS does not simply send its team members to external courses and hope for the best. On the contrary, we want the education institutions we collaborate with to be as engaged as possible with our corporate culture. We want them to act as if they might be TELUS team members themselves.

It is important for us to have a two-way, innovative partnership that benefits our team members, our objectives and the partnering institution. It most certainly is a working lab of innovation and an example of the Bennis and O'Toole business model not the scientific model.

In early 2014 we made the decision at TELUS to take our learning and development efforts one step further. Never one to believe in the status quo, we issued a request for proposals to 10 business schools across Canada for a new type of MBA: the TELUS Masters of Business Administration in Leadership and Strategy.

If we were going to invest thousands of additional dollars in our team members, why not do so in an Edison-like business model living lab, where both TELUS and the winning business school could co-create the final outcome, experiencing communitas along the way?

The winning institution -- University of Victoria's Peter B Gustavson School of Business, accredited by AACSB and EQUIS -- understood our vision and is now hard at work (with us in partnership) to develop a new corporate MBA.

The launch of the new degree, developed and delivered in partnership with TELUS, means there will soon be a new cadre of leaders with a unique mindset that allows them to see the world differently.

The first TELUS cohort is slated for October, 2015 and in 2016 we'll also begin offering this unique MBA to our corporate customers and partners.

TELUS is now in a friendly and collaborative partnership with the University of Victoria to develop something that will benefit our team members, our organization, our customers, our community and, of course, our partnering university.

The program is being co-developed by university faculty and TELUS team members, taught by both the University of Victoria and TELUS It utilizes face-to-face and virtual methodologies. Six residencies will be interspersed with virtual-based learning. Our CEO, Darren Entwistle, is fully engaged in the project, committed to being the Executive-in-Residence for the first residency.

It is definitely "business as unusual" but in the spirit of Edison, Ford, Bennis and O'Toole: isn't that what innovation should be about?

Dan Pontefract is the author of FLAT ARMY: Creating a Connected and Engaged Organization and is Chief Envisioner at TELUS Transformation Office. His next book will publish May 10, 2016.