One day, Warren was having a conversation with his pilot about his life goals. Warren then asked him to create a list of the top 25 things he wanted to achieve in the next few years.

After jotting down his list, Warren asked the pilot to review and circle the top five that were most important to him. As Warren expected, the pilot initially struggled, and took some time to think about his decision.

Finally, when he decided on his top five, Warren asked him: "Now what are you going to do with the other 20 things on your list?" Hesitantly, the pilot responded: "Well, the top five things are my primary focus. The other 20 things are not as urgent, but I still plan to give them dedicated effort."

What Warren said next surprised me.

"You've got it wrong. Everything you didn't circle just became your 'avoid at all cost' list."

This was Warren's key to success.

Avoiding all distractions, until he succeeded with his top priority goals.

How many tasks do you have on your to-do list?
How many projects are you working on?

If your answer is anything above the number three, it's too much.

Humans throughout history have developed a natural habit to create lists. Creating a list of to-do's is an effective way to break down our goals into simple, comprehensive parts.

Italian novelist Umberto Eco explains that "the list is the origin of culture. Wherever you look in cultural history, you will find lists." In essence, creating a list helps us simplify, and make sense of the complex world around us. This is why we create grocery shopping lists, to-do lists, and growth lists, in order to feel less overwhelmed and increase our day-to-day productivity.

But the problem is...

As humans, we have a natural tendency to pack our lists with an endless number of tasks that is unrealistic to achieve. 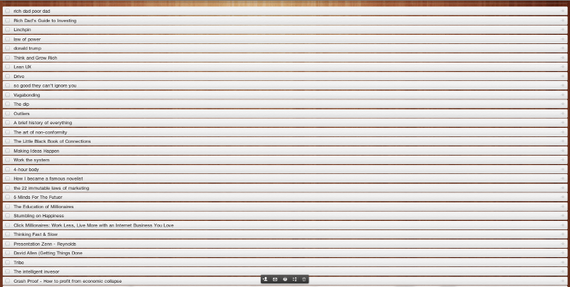 How many times have you had an important task on the top of your to-do list, but you end up doing every other miscellaneous task possible such as checking email, reading articles, or checking Facebook to avoid it.

I've literally invented work that wasn't on my list before, only adding more tasks on my to-do list, JUST to avoid doing the important task at hand.

What sets apart high achievers is not the number of ambitious things they plan to get done, it's the ability to avoid distractions in order to focus on accomplishing the things that matter.

"People think focus means saying yes to the thing you've got to focus on. But that's not what it means at all. It means saying no to the hundred other good ideas that there are. Innovation is saying no to 1,000 things." -- Steve Jobs

Creating a NOT To-Do List
Now I'm not saying we shouldn't have a To-Do List. There are clear benefits to having a list to prioritize what we need to get done.

The point is that it's important to have a Not To-Do List in order to avoid our To-Do List from getting piled up. It's what will help us stay organized, allowing us the time to focus on the big picture.

To give you an example, here is Jack Dorsey's "Do" List:

1. Stay present: don't focus on the past or the future.
2. Be vulnerable: show people your mistakes and fears so that they can relate
3. Drink only lemon water and red wine
4. Six sets of 20 squats and push-ups every day, run for 3 miles, meditate on this list, stand up straight, spend 10 minutes with a heavy bag
5. Say hello to everyone
6. Get 7 hours of sleep

Determine what your Not To-Do's by reflecting on the constructive criticisms you have heard throughout your life. Whether it was mentioned to you by a peer you trust, or something you know you could improve on.

Focus on avoiding the habits you repeatedly make that will improve a specific trait for yourself. I would focus on one or two to start.

For me, improving accountability and productivity was going to make the biggest impacts in my life. I formed my Not To-Do List around these two specific qualities. 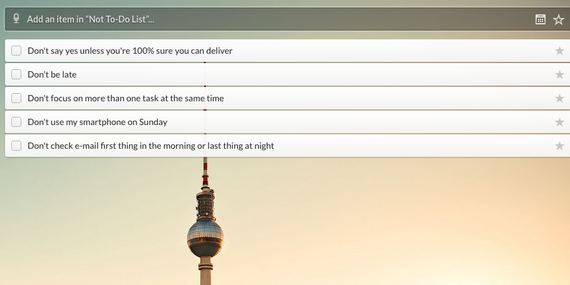 Whether you're looking to bring about innovation into your business or you're seeking a way to simplify your life. Creating a Not To-Do List will help you focus on the projects that matter.

As much as we want to believe that we have super-human qualities, there's only one of us, and there's only 24 hours in the day. Saying no to the "good" opportunities will allow us to take advantage of the "great" opportunities that eventually come our way.

You can't be a superstar if you try to do everything.

If you enjoyed this article, sign up for our newsletter to receive regular pieces like this one, including tips on productivity, overcoming failure, and building a business around your lifestyle.

This article is brought to you by The Growth List.