When I was a kid, I loved being home sick from school. I wasn’t a school-hating heel-dragger, but I was emphatically not of the “please let me go, I can’t miss social studies” class of student. On these special occasions when my sore throat was deemed risky enough that I scored a day on the couch in my PJs, I turned to one author and one author only: C.S. Lewis.

I’m one of three kids, and my family owned at least two of those paperback box sets of The Chronicles of Narnia -- you know, this one: 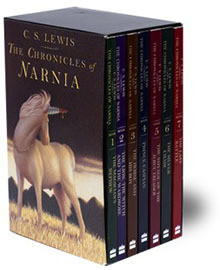 Once one was located, on a brother’s bookshelf or shoved in a corner of the den, I’d proceed to read them all. I don’t recall if I could actually finish the entire box set in one sick day -- common sense would suggest no -- but I’d certainly take a good shot at it, and if I had strep throat or some other multiple-day illness I might even start over again from the beginning.

It would be satisfying to claim that this choice of activity was due to my sheer precocity, but it had more to do with house rules: no TV except in pre-approved doses (“Reading Rainbow,” for example). With my mom or dad somewhere in the house, I didn’t dare switch on "The Price Is Right." In fact, my petrifaction at their edict was so total that it was some time after I started being left home alone on sick days that I realized I could watch soap operas, which I kept at a low volume -- in case my father heard them at work several miles away, I guess.

Though my traditional rereadings of The Chronicles of Narnia were eventually supplanted by surreptitious viewings of the supernatural soap "Passions," those books actually offered far more comfort and pleasure than the illicit TV. Perhaps that explains their consistent place in my sick-day reading docket, when most books would have long been cast aside for something less familiar.

What makes Lewis’ writing so profoundly soothing? Though fantasy novels often purport to allow readers to escape from the annoyances of real life, Narnia has a homey magic you’re unlikely to find in the work of Lewis’ friend J.R.R. Tolkien; even the charmed Harry Potter novels venture into darker, more remorseless terrain as the series winds on. With a disregard for the grittier mechanics of world-building (which famously irritated master fantasist Tolkien) and a not-so-secret Christian message, Lewis somehow knits the most seductive fragments of fantasy and religion together into what is essentially a cozy literary afghan for the soul.

Lev Grossman, who has written extensively about his love for Narnia, threw the warmth and comfort of Lewis’ world into sharp relief by utterly subverting it in his series The Magicians. In Grossman’s books, Fillory, a knockoff of Narnia, turns out to be real, and far less benign than the protagonist had thought from his youthful reading of the Fillory books. Though Narnia sometimes seems a threatening place, when we juxtapose it with the chaotic and cruel world of Fillory, we yearn for the ultimate justice and order in the Narnian universe, as well as the way every wrong seems rectifiable.

There’s much to question in the Narnia narrative, though I didn’t bother to as a kid. The racist implications of the maligned Calormen people are particularly troubling; not every young reader will find the pages of the Chronicles as unmixedly welcoming as white kids like myself. The series also seems like a rather crude form of Christian argument, watered down for kids who don’t want to hear about the sometimes angry and jealous God of the Bible. Lewis himself said he hoped the books would "make it easier for children to accept Christianity when they met it later in life." He elaborated, “I am aiming at a sort of pre-baptism of the child’s imagination.” Well then! Even as a Christian, the similarity to propaganda can seem discomfiting, let alone how it must strike non-Christian readers.

But of course, it’s also the simplified, brightened version of Christian ideology (along with the charming fauns, talking animals, and magic) that makes Narnia so endlessly welcoming -- the (worthy) dead are resurrected, the (remorseful) guilty are forgiven, and the (righteous) heathens are welcomed into the fold. Curses, battles, and the darkest evil will always give way, ultimately, to the joy Lewis sees around the bend.

In reality, Lewis sometimes struggled with his faith, especially after the death of his wife. His grieving process, and the challenges his suffering posed to his belief system, were examined in the book A Grief Observed, which he initially published under a pseudonym. Life itself is difficult and often unforgiving, not full of opportunities for redemption and renewal, as Lewis came to know too well. But in The Chronicles of Narnia, at least, we feel the magical comfort of that eternal optimism, that belief that the best is somehow always yet to come.