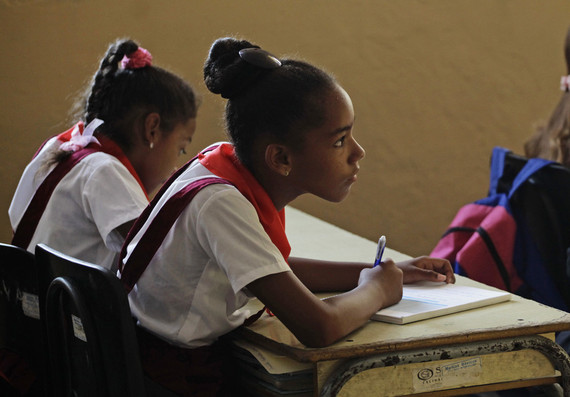 Cuba takes education very seriously. It became a top priority after Fidel Castro became prime minister in 1959 and this helped the country shake its mantle as the most unequal of the Hispanic Caribbean territories during both the colonial and post colonial early 20th century periods.

The foundations of Castro's new social - and socialist - order were premised on the common understanding that only good-quality, empowering education could conquer Cuba's acute poverty, ignorance and underdevelopment.

Cuba invested heavily to make its education system world class. By the 1980s and 1990s, the country's educational disbursements as a ratio of gross domestic product were among the highest in the world.

Cuba has much to teach Africa about prioritising and reforming education. Its approach to education has made a unique contribution to social change. There are valuable lessons here for the continent and, as more than a decade of my research has shown, particularly for South Africa.

There are three major methods through which Cuba revolutionised teaching and learning after Castro's socialist government came to government.

The first was its celebrated 1961 Literacy Campaign, which marked in concrete terms the importance of education for an embattled society in transition. In the space of barely one year, one million illiterate people were targeted by mobilising 250,000 literacy teachers and thousands of devoted school children.

By the end of 1961, 75% of those one million had achieved rudimentary literacy. There were extensive follow-ups concentrating also on adult education.

While the literacy drive was underway, school enrolments grew rapidly - and more than doubled a decade later. This was largely because education at all levels, including university and college, became free of charge.

The government launched programs for peasant girls, domestic workers, prostitutes and those who had dropped out before finishing school. These, along with the newly founded Organisation of Day Care Centres, sought to ensure that education was accessible to all. The programmes also targeted those living in remote and isolated rural communities.

Cubans' hard work has paid off. Since the mid-1990s net primary admission has been 99% for both girls and boys, compared to 87% in the Latin American region. At that time, 94% of Cuban primary students reached grade 5, contrasting steeply with 74% in the region. Gross secondary enrolments were 78% for boys and 82% for girls, compared to 47% and 51% in the region.

Cuba knows the importance of good teachers. During extensive fieldwork, I discovered that its teacher training institutions use wherever possible only the most-advanced, well-researched scientific teaching methods and strategies. Students generally are accepted as trainee teachers if they possess the virtues of intellect, good character, a proven commitment to social development and love for children.

At the turn of the millennium Cuba boasted the highest number of teachers per capita worldwide, 1:42. At the 2015 International Pedagogia Conference in Havana I was told by educational officials that the country's student:teacher ratio as of 2015 is an astonishing 12:1.

Cuba's methods are respected and applied way far beyond the island's boundaries. By 2010 its literacy method had been adopted in 28 Latin American, Caribbean, African, European, and Oceanic countries. Its use had qualified millions of formerly unschooled people the world over to read and write.

From my discussions with Cuban education officials during research trips, it is obvious that the country wants struggling countries to learn from its experiences. They say it is deplorable that nearly 800 million people, two-thirds of them women, are illiterate around the world. It is likewise unpardonable that nearly 70 million children do not have access to basic schooling.

Ordinary Cubans and government officials alike argue that people's minds must be highly developed for them to contribute to a world free of fear, ignorance and disease. Education, ultimately, empowers human beings to become seekers and guardians of progress and peace.

The Cuban government's steadfast commitment to education is irrefutable. The island's relatively modest economy makes its educational triumphs all the more astonishing. This sets the objective basis for more in-depth scrutiny of its methods, particularly by struggling nations.

After all, Cuba's accomplishments are not a miracle or a coincidence. They are the outcome of years of devoted work, sacrifice and meeting crucial commitments on highly effective terms.