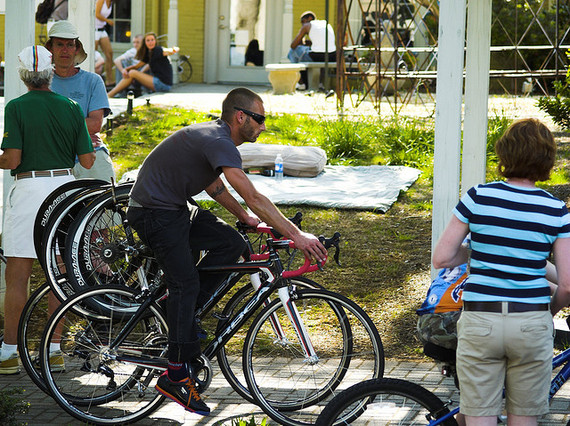 First, let me point out that I'm hugely pro-bike, and I spend about half of my time getting around on my own two wheels. The rest of the time I walk or take public transportation.

I support more bike lanes, better bike infrastructure, and all that comes with considering bikes in urban and suburban streets, and I have voted for and financially supported campaigns to do just that.

But as bikes proliferate (yay!) in our urban centers and more cities become bike-friendly, I've noticed that the behavior of people on bikes seems to be declining.

In the last year I've had experiences in two different cities where people on bikes are absolute menaces.

And even worse, it's a problem the cycling community doesn't seem to want to address; whenever I have brought up my concerns as a pedestrian, I get brushed off by the bikers.

It's the worst in Berkeley, California where I have been living for the past year. Miles of quiet side streets, cars that are (by and large) respectful and careful of cyclists, bike lanes and bicycle boulevards mean that riding a bike in Berkeley is mostly really enjoyable and safe.

And yet, despite the bike lanes and ability to bring a bike on the BART, bike parking everywhere and myriad bike accommodations, despite all of this--almost every time I'm on foot, I almost get run over by someone on a bike, who is riding on the sidewalk.

Oftentimes a sidewalk next to a bike lane. Or next to a street without one single car on it for blocks around. So these are not cases of a cyclist escaping from busy traffic.

It's just some jerk on a bike; several times I have almost been hit as I approach an intersection (since a pedestrian can't see around a sidewalk corner), and on three separate occasions I have been scared and hassled aside so someone could pass me from behind on their bike. The last time I turned around and yelled at the guy--especially because there was a bike lane right next to us.

As more bikes hit the streets in NYC, it's gotten dangerous there, too. During my last visit (I'm originally from the area), I was sideswiped--not by a car from Jersey, but by a jerk on a bike.

I guess I'm in good company? Nicole Kidman was actually knocked down by a biker in NYC.

I lost count of how many bikes blew through traffic lights, making my heart pound as I tried to walk across a street at a crosswalk with the walk sign. (And I'm a 30-something adventure-sports lover who has ridden a bike since she was 6 years old; if they are scaring me, imagine how non-bikers must feel?)

Who are these selfish riders?

Sometimes it's kids, but the vast majority of the time, in my experience, it's a guy (always in bike helmet) from 30-60 years old. Why these guys? No idea.

Not only are these bikers endangering other people and themselves, they make all of us cyclists seem irresponsible. That's what makes me nuts about the whole situation. Because I ride a bike too, and these bikers make us all look bad.

Maybe we need to get bikers to obtain licenses (I'm mostly thinking of the education part that's usually required to get one--remember studying the rules of the road for your driver's license?). From this excellent survey of bike licenses around the country, it looks like they have mixed effectiveness.

But if licenses aren't the answer to curbing bad biker behavior, what is?

Cyclists should and could do a better job policing other riders. It seems that within the cycling community, it's seen as "cool" to break the rules, probably stemming from the years before bikes were accommodated in cities.

But it's not that time anymore, and I'm sick of being harassed by people on bikes (the only safe place seems to be when I'm on a bike myself!)

We need to do something. I'm not talking about "kids breaking rules" here (because that's always going to happen, I get that). But when a 50-year-old in a bike helmet in a backpack almost runs you down, it seems that the basic rules of the road are either unknown or purposefully ignored because they can be.

I want to keep (and expand!) bike lanes and bike riding, and get more cars off the road. It's healthy, it's fun and it saves a ton of cash to ride a bike instead of owning a car. But we cyclists need to address the aggressive, rule-breaking, and ultimately dangerous behavior of our swelling ranks.