When you're struggling with debt, combining all of your debts into one easy-to-pay loan sounds pretty good. The idea is that you'll reduce the overall interest you pay, and be hit with fewer late fees since you'll only have one payment to remember.

Debt consolidation can actually leave you deeper in debt. 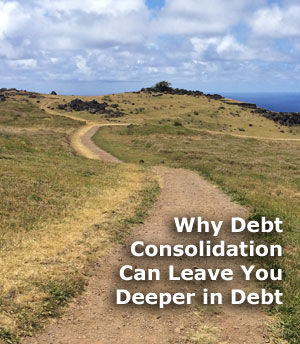 Most likely, the real problem isn't high interest rates or constantly having to manage making on-time payments to multiple debts. The real problem is usually something deeper. Typically, that's a combination of the way you view money and what you do (or don't do!) with the money you have.

When your financial house is a mess, it's hard to get ahead. Things like tracking your spending, budgeting, building an emergency fund, getting adequate insurance and saving for retirement matter.

Chances are, many of the people you know are using debt to pay for things they can't afford. They're living beyond their means, but that doesn't have to mean they're living high on the hog.

More likely, it means that they need or want to buy something today, but don't get paid until Friday. Maybe it means they have an unexpected expense and don't have the cash to cover it. Or maybe it just seems normal to borrow money for things like a new car or college.

In other words, many people use debt as a solution. (A solution that they literally pay for later.)

But it's not logical

Paying extra for things you could get for less if you
didn't
use credit isn't logical. And it's not logical to assume that you'll never lose your job or get sick, or that you'll always be able to make enough to cover your debts with money to spare.

But your hunger for the things you need or want overrides logic, or the idea of ever really getting your financial house in order seems impossible. So you use debt as a solution.

The truth is, you don't get into debt logically, and you can't get out of it that way either -- at least not without first changing the way you think and act regarding money. You have to build new habits that will allow you to do so.

What happens if you try to override emotions and old long-term habits with a quick fix like debt consolidation?

Often you'll end up even deeper in debt.

You may feel like you paid off the credit cards with your debt consolidation loan, and you may even joyfully tell people that you "paid off your credit cards!" -- but the truth is, you still owe the same amount of money. You're just paying a different company.

The really bad part is, moving your debt around can give a false sense of relief. It makes you feel better about what you owe. That's a problem because most of us don't change until we can't stand a situation any longer.

So you don't change anything about your behavior.

And the next time you need money, you'll probably do what you've always done. Borrow more of it. Until one day, you end up with all the same types of loans you had before plus that debt consolidation loan.

It's not a matter of self-control

Now you might be telling yourself that you've got more self control than that. You're sure that YOU will be the exception. Except you probably won't be, just like I wasn't. By definition, almost no one is an exception.

Why take the risk?

Especially when getting out of debt isn't about self-control at all. It's about changing the things you do and the way you view borrowing money -- long term.

Make your changes first, and then consider a consolidation loan (if you still want to) once you've made at least a solid year of progress on reducing your debt. The first change to consider? No longer looking to debt as a solution. Prepare for the unexpected with money instead.

You have the power to change

Think back on the scenarios where you borrowed money in the past and come up with three things you could have done instead so that you're ready if those situations happen again.

Track your spending, even if it's just for a couple of days at first. Build at least a small emergency fund to start with. Decide where YOU want your money to go on a regular basis.

Then pick a debt and work as hard as you can on getting it paid off. Once you do, celebrate a little and move on to the next one. Don't try to get fancy by moving debts around.

If you want to pay less interest, get a part time job or work on the side (even if it's just babysitting or walking someone's dog) and then use that extra money to get your debt paid off faster.

Remember, you can't borrow your way out of debt. Stick to your plan instead of looking for shortcuts, and you will get it done.

Debt freedom expert and creator of the Pay Off Debt app