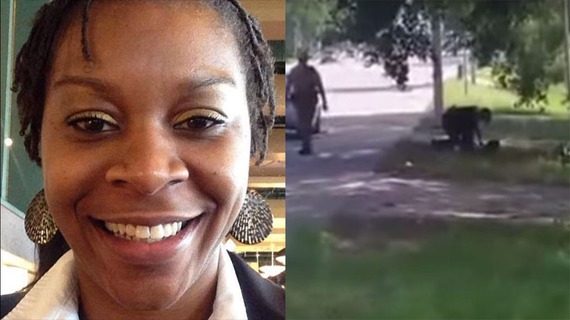 My heart aches. My anger is front and center. My vulnerability is so loud, it screams.

A year ago Eric Garner was killed by police. Within these last twelve months, there have been more lives added to the number of this "black list' of souls taken from us so quickly by those we are suppose to trust. Recently, two black women were added to this list: Kindra Darnell Chapman and Sandra Bland. Its not as if women have ever been absent from the list of victims of police brutality. We remember Tanisha Anderson, Yvette Smith, Rekia Boyd, and seven-year-old Aiyana Stanley-Jones to name a few.

Many protestors and so-called 'allies' have failed to call their names with other fallen black men. Some have not called their names due to ignorance. Others have not called their names because 'black' has always been synonymous with men. As a result, so many have co-opted #blacklivesmatter to really mean black men lives matter. "Let's take care of men first, then we can take care of the women." We, black women, have always been invisible or secondary.

I thought this kind of invisibility would work in my favor with the police. I knew that my black skin would make me visible to the police but my gender would never make me a target. I also thought that my education would save me if I ever had an encounter with the police. I've been stopped by the police several times. Once, I was mistaken as a prostitute because I was checking my phone on a corner in East New York, Brooklyn. I was let go once they realized I was a professor. Not having a criminal record saved me. My faculty ID saved me. My status saved me. But I don't think any of that matters. I was lucky. Professor Ersula Ore's encounter with police taught me that. You can have a Ph.D., a tenure track job, and a skirt on. It doesn't matter. You are still the N-Word to them. Sandra Bland was educated and a conscious sister. One only wonders if what was in her head and heart was the motivation for her suspicious death by "them."

I'm still trying to figure out who 'them' really is. I walked by a group of "them" yesterday. I'm sure they saw the distain in my eyes. Its not that I hate cops. Its just that I don't know who to trust and that's frightening. Is it all police officers I should fear, be suspect of, perceive as racist-- even if he has the same skin color as I? Which "them" should I trust when they ask me for ID, tell me to get out of the car, or raid my house only to find out that they are in the wrong house? Will this fear and distrust work against me and cause me to be the next female victim that few will remember?

All I know is that Kindra Darnell Chapman and Sandra Bland was found hung in their jail cells recently. One allegedly stole a cell phone and another was about to be released on $500 bond. "They" want us to believe that these women took their lives in police custody over something so frivolous. We know the history of lynching in Texas and Alabama. We are not that easily fooled. We are also not fooled when they say they will investigate matters. Investigation discourse has always been a way to calm us colored folks down. Some have fallen for it. I will not.

I have never felt this vulnerable. Ok, I have. But on that fall day in the late 1980's, I told my parents a secret and they handled it quickly and protected me. But who do I tell this secret to? This secret I speak of is what white people are just beginning to recognize; that some police kill black people for no reason at all and they get away with it. The police are who I am suppose to tell my secrets to. Who do I tell their secrets to when they are the ones causing the harm and destruction?

I feel vulnerable. I know this goes against the stereotype of the strong black woman, but I do not care. Strength and vulnerability are not mutually exclusive. My strength allows me to see what's really going on, to know that I am prey, to acknowledge my feelings, but to also find a way out of the madness.

I am not 100% safe. I feel more comfortable around the gangstas and street corner inhabitants of BedStuy than those cops patrolling Nostrand Ave. Although I hate my share of street harassment, I hate being handcuffed, my face being thrown on the ground and my body being found dead in a cell much more. My gender will not protect me. Brother, your masculinity will not protect you. Hate is not a respecter of persons. Fighting back with words or with a kick seems to justify their actions.

They say that you can judge a society by the way it treats its women and children. Well, a baby girl, Aiyana Stanley-Jones, is dead. This week, a 28-year-old woman, Sandra Bland, has joined her. America we know who you really are. You are not the utopian dream that distant folks have believed you to be. America has a race problem. It has a policing problem. It has a low attention span problem. It has a killing problem. It doesn't respect you as a human and it doesn't respect you as a woman. No man in blue should be the law. No sergeant should play god. We should all feel secure and protected in this "land of the free, home of the brave." But we do not feel this. I want to feel this.

"They" will not change things but "We" can. At least that's what I tell myself to lessen the vulnerability and the powerlessness. Its all I have to hold on to in this final hour.