The market's response to Wednesday's economic data was somewhat perplexing at first blush. Despite a modest uptick in the core Consumer Price Index (excluding food & energy) and a long overdue surge in New Home Sales, Treasury bonds rallied and yields fell. This trend is continuing today with the yield on the 10-year Treasury all the way back down to 1.88% as I write. This market response harkens back to a decade ago when then-Fed Chairman Alan Greenspan admitted he couldn't explain why bond yields were so low and instead called the phenomenon a "conundrum." This time, however, there are clear market forces keeping bond yields down. One need only look across the pond to understand why we're able to borrow so cheap.

Fearful of a Japanese-style deflationary spiral, the Fed and other central banks across the globe have been desperately trying to stoke inflation in recent years. The Fed is further along in its expansionary monetary policy, but this doesn't mean we're out of the woods in our quest to defeat the monster that is deflation. In recent months, disinflationary pressures are coming from two different sources. First, a massive decrease in energy prices and many other commodities has been bringing down headline inflation. The Fed, for its part, is largely dismissing the disinflationary threat of lower commodity prices by saying that the commodity price volatility will be transitory. Eventually, the Fed believes, the supply of oil and gas will adjust to meet demand, and prices will stabilize.

A second source of disinflationary pressure in the US comes from the rapid rise in the value of the dollar. While the Fed won't explicitly come out and say so, it is nervous about the dollar's rapid ascent. An increase in the dollar makes our exports less competitive and spurs demand for lower-cost imports. In addition to creating a drag on domestic GDP growth, the rise in demand for cheaper imports creates pressure on price levels. And while lower prices are good for consumers, it also creates a challenge for a central bank that is trying to increase inflation to a target of 2%.

The drop in energy prices and the surge in the dollar are clearly creating fears that inflation may fall rather than rise to the Fed's target. Because expected inflation is one factor that determines long-term interest rates, it's not surprising that bond yields have fallen in recent months. But perhaps a more plausible explanation for why Treasury yields remain so low is simply relative value. As noted above, the Fed is nearing the end of its aggressive monetary easing. The Fed has stopped increasing the size of its balance sheet, and most people believe the central bank will start increasing short-term interest rates by year-end. Other major world economies, however, are just beginning the process of Quantitative Easing. Most notably, the European Central Bank (ECB) has committed to buying nearly $1.3 trillion in bonds at a pace of $70 billion per month into the year 2016. As expected, the promise of such massive amounts of bonds has caused yields on European sovereign debt to plummet.

The lines on the chart below show the yield trends on both the 10-year US Treasury bond and the 10-year German Bund. Since the ECB first foreshadowed its willingness to drive down interest rates through quantitative easing (the large scale purchase of bonds), the yield on the German Bund has fallen sharply to a recent low of about 0.18%. The 10-year Treasury, for its part, has also fallen in yield but remains at the relatively high level of 1.88% today. The spread between these two yields, represented by the green bars below, is now about 165 basis points, down from a recent high of about 190 basis points. For reference, the spread was 30 basis points just three years ago.

The widening spread between the Treasury and the Bund has created an arbitrage opportunity. Most investors would rather own a bond yielding 1.88% in an appreciating currency rather than a bond yielding 0.23% in a depreciating currency. Because of the Treasury's relatively attractive yield, there is likely a limit as to how high the yield on the Treasury can go in the near term. This situation is likely to last so long as the ECB maintains in QE mode. In other words, we are the unintended beneficiaries of Europe's weak economic condition. Unfortunately, this also means that the Fed will have an exceedingly difficult time increasing long-term interest rates if and when economic growth accelerates and inflationary fears increase.

The music has been playing for a very long time now, and investors have benefited handsomely. Make sure you have a seat nearby when the music stops. This is not a time to add incremental risk to portfolios. 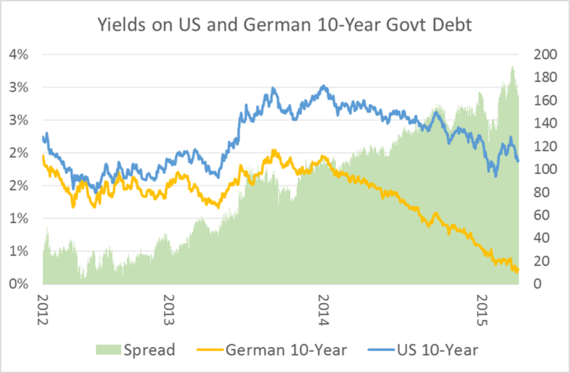