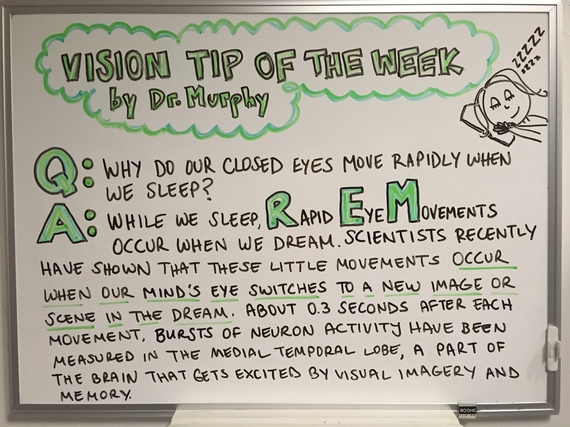 We have all heard of REM sleep but what exactly are rapid eye movements and why do they occur? It turns out that while we sleep our eyes may move quickly, flickering beneath our closed lids when our brain conjures up a different concept or a change of scene in our dream.

We obviously aren't seeing people or objects in real time since our eyes are closed, however, the part of our brain that is associated with memories and visual imagery, the MTL (medial temporal lobe), spikes in activity shortly after our eyes change their direction of gaze. Studies have shown a spike in activity in the medial temporal lobe (MTL) occurs about a quarter of a second after each rapid eye movement.

(Interestingly enough, rapid eye movements are not associated exclusively with a visual stimulation and activity in the MTL. Rapid eye movements can be observed during sleep in fetuses and also in people with congenital blindness who do not report visual dreams. Scientists say one can still dream without visualizing "pictures." Dreams are filled with the stimulation of emotions, thoughts and our other senses as well. These non-visual changes in scene or sensation may also stimulate rapid eye movements.)

So, "science hidden in plain sight" tells us that while a picture is worth a thousand words, you do not need a thousand pictures to tell a story. Perhaps dreams are not movies that we play in our heads but rather a storyboard of memories, feelings and sensations, sometimes visual, sometimes not. Either way, the brain in its resting state can make our eyes move in freaky ways.