Why are starting blocks designed for starting from a crouched position?: originally appeared on Quora: The best answer to any question. Ask a question, get a great answer. Learn from experts and access insider knowledge. You can follow Quora on Twitter, Facebook, and Google+. 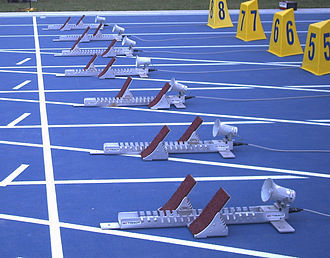 Starting blocks are designed to give sprinters an explosive horizontal burst from a four-point stance to start their race. A good start from the blocks will not only give optimal positioning relative to other runners, but it will also allow sprinters to reach their top-end speed earlier in the race than they would running from a standing start, a rolling start, a three point stance, or any other starting position. However, it's important that the sprinter in the blocks execute various pointers perfectly, otherwise it will not yield much of an advantage.

The most important pointer of starting blocks is to have the proper body angles. These angles come from the crouched position.

The explosion out of the blocks comes from pushing off the foot pedals, which the sprinter's feet will be planted against. The best way to maximize power off the blocks is by having the proper leg angles while in the set position (with two hands on the ground behind the starting line, both feet on the pedals, and butt in the air slightly above head level). The proper angles are roughly 90° for the lead leg and 135° on the back leg.

The analogy that is often used among track coaches is that the legs are like a coiled compression springs. Straight legs are like extended springs; neither one of them will be able to generate much power in that current position. On the other hand, bent legs are a lot like compressing the spring: both are ready to bounce into action.

Think of players going for a rebound in a basketball game. As soon as the ball is shot, they wait to see if it scores or misses. If it misses, the players bend their legs (maybe while boxing out a defender) and then jump for it. They don't go far below 90° because that would be inefficient. They also don't angle their legs far above 135° because that wouldn't produce much power, resulting in a weak jump.

Of course, basketball players are pushing directly off the ground, which is why they get a powerful vertical burst. To get a powerful horizontal burst, you need something firmly anchored to the ground and (roughly) perpendicular to the surface, which in this case would be starting blocks. The pedals on the blocks -- which can be adjusted to one's personal preference -- allow the sprinter to drive out of the blocks horizontally.

On the first few steps out of the starting blocks, most untrained sprinters have a natural tendency to pop straight upwards, thus defeating the point of using blocks. Trained sprinters learn to stay low for the first 10 meters -- known as the drive phase -- taking powerful strides to transition into their acceleration phase. 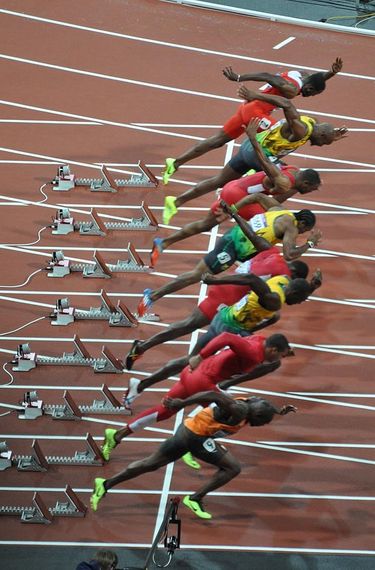 The crouching start is not unique to track and field. It is also used by many swimmers, particularly in freestyle races. However, for swimmers, the angles are reversed: the front leg is closer to 135°while the back leg is closer to 90°.