Why does the US boycott one of its own citizens who happens to be the Christian mayor of Bethlehem? This has been the case regarding Victor Batarseh, the elected mayor of the Palestinian town of Bethlehem. 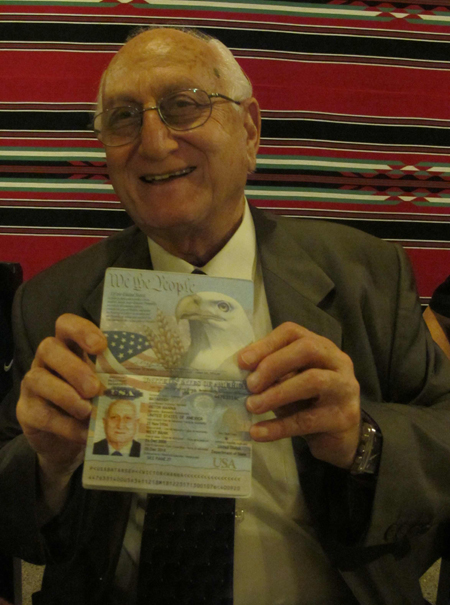 Mayor of Bethlehem with his U.S. passport

Batarseh, a Roman Catholic physician and a U.S. citizen, ran in the municipal elections in 2005 on an independent list of three Christians and seven Muslims. While the seven Muslims on his list lost, he and two other candidates won membership in the council. Later he was chosen by the elected city counselors to be the mayor of the city, Batarseh won the mayorship in part by pro-Hamas candidates. The city's tradition has always been that the mayor of the birthplace of Christ should be a local Christian.

After he was elected, American, Israeli and EU officials boycotted him without any explanation. Western and Israeli officials, however, have continued to cooperate with the governor of the Bethlehem district, Abdel-Fattah Hamaiel, a Muslim appointed by President Mahmoud Abbas.

An American official in the U.S. consulate in Jerusalem, contacted by the Palestine News Network, hinted that the reason of the boycott is connected to the mayor's political past and the set up of his coalition. Batarseh is known as having politically supported the Popular Front for the Liberation of Palestine, a left wing PLO faction that the U.S. considers to be a "terrorist" organization.

The anonymous U.S. official told PNN the United States does not deal with the Popular Front for the Liberation of Palestine, as it is a government-designated foreign terrorist organization (FTO). An FTO is defined as "a foreign organization that engages in, or retains the capability and intent to engage in, terrorist activity or terrorism that threatens the security of U.S. nationals or the national security of the United States," according to the U.S. official. No proof was given as to the direct connection between Batarseh and the organization nor was any explanation given to how the U.S. doesn't arrest Batarseh, an American citizen, whenever he visits the US, which he has done many times since being elected as mayor of Bethlehem.

For his part, Batarseh insists that he is supporting the PLO, which the U.S. has removed from the list of terrorist organizations. "For me I represent a Christian family from Bethlehem, politically I support the Palestine Liberation Organization as a representative of the Palestinian people," he told PNN.

Furthermore Batarseh insists that his office is outside of politics altogether.

"The municipality is a service provider it has nothing to do with politics," Batarseh told PNN. "There is no reason to boycott me or the city of Bethlehem, and this is Israeli-led boycott simply because I am not Fatah."

By tradition, the mayor of Bethlehem leads with local government officials and dignitaries Christmas eve mass and other such religious and national events.

Western officials continue to support the people of Bethlehem by working through the governor of the district of Bethlehem, however the boycott causes the city to lose a lot of potential support and cooperation. The U.S. position has also strengthened the Israelis to put travel obstacles to the mayor. The Israelis are forced to give him a permit to travel to Jerusalem because as mayor of the city he is an ex officio member of the board of the Jerusalem Electric Company. However, unlike mayors of nearby Beit Sahour and Beit Jala, Batarseh has to undergo a humiliating search every time he leaves the city, which is totally surrounded by Israeli military checkpoints.

Palestinian prime minister Salam Fayyad, who is well liked in Washington, has promised the Bethlehem mayor to interceded on his behalf with American officials, but no results have yet been seen from this intervention.