Presidential candidate Bernie Sanders is breathing fire on the campaign trail these days, including his most recent campaign speech that advocated the breakup of too-big-to fail banks. "We will no longer tolerate an economy and a political system that has been rigged by Wall Street to benefit the wealthiest Americans in this country at the expense of everyone else," Sanders said.

So why does Senator Bernie Sanders love Denmark, and has been mentioning it and the other Scandinavian countries as ideal models for a developed country, one he would like the U.S. to emulate?

"In Denmark, social policy in areas like health care, child care, education and protecting the unemployed are part of a "solidarity system" that makes sure that almost no one falls into economic despair," he said in a 2015 Huffington Post article. "Danes pay very high taxes, but in return enjoy a quality of life that many Americans would find hard to believe." 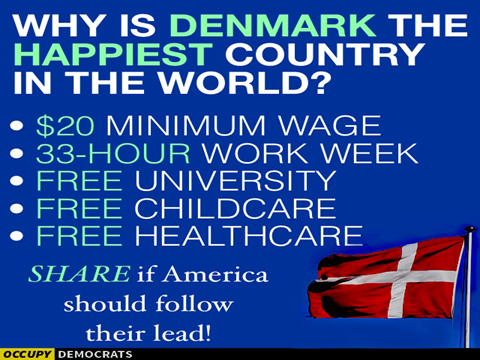 A recent Center For Economic Policy and Research report highlighted the differences between Nordic countries and the United States. The differences are mainly because of their superior social safety nets.

For instance, the U.S. has the lowest average longevity at 78.8 years, vs. Denmark's 80 years, while citizens of Iceland and Sweden live 82 years. Do their colder climates have something to do with it? No, more likely is the fact that they have to work fewer hours for almost the same income, with better health, educational and retirement outcomes.

It's well-known that U.S. health care costs are double that of all other developed countries, as are infant mortality rates, while homicide rates are more than double of any other developed country. We know, for instance, there are more than 32,000 gun deaths per year in the U.S., with the majority due to suicides -- which also tells us the mental toll that comes with an inadequate social safety net that doesn't support its citizens.

So it should be no surprise the U.S. has the highest income inequality in the developed world, before and after taxes and transfers. That is to say, western capitalist-oriented economies generate profits that go to the major wealth holders, so fiscal policies need to re-balance this result. And that is what the Nordic countries in particular, do so well. "Countries with greater levels of market income inequality are more proactive at reducing inequality through their tax and spending systems," says the CEPR.

Then why is there opposition in our Congress, particularly, to U.S. citizens having the same benefits as other developed countries, when we are supposed to be the richest country in the world? It's the successful opposition to higher taxes by the wealthiest among US. The wealthiest have succeeded in reducing their taxes and tax rates since President Reagan, the first ultra-conservative Republican president.

The result is ugly -- and shows the U.S. is not the land of opportunity for many Americans. Instead, we have the result of a largely unregulated financial system -- higher death rates, violent crime and incarceration rates, as well as inadequately funded health care, retirement, and educational systems.